Argentina has announced austerity measures in a bid to tackle the "emergency" created by the country's currency crisis.

In a televised address, President Mauricio Macri said Argentina could not keep spending more than it earned.

Taxes on exports of some grains and other products will rise and "about half" of the nation's government ministries will be abolished.

The government has not said which ministries will be closed or merged.

Argentina is the biggest exporter of soy meal and soy oil and is also a big producer of corn, wheat and raw soybeans.

Mauricio Macri is doubling down on his promise to reform the economy.

His government has announced it will go far beyond its targets set with the IMF back in May. By next year, Argentina says it will have its budget balanced, so that it spends exactly as much as it earns before interest payments (previously its target was of a deficit of 1.3% of its GDP). By 2020, it hopes to produce a 1% surplus in its budget.

The main announcement was the reinstatement of a tax on exports. On television, Mr Macri renewed his commitment to carry out reforms, but acknowledged the government's own mistakes. He suggested his gradualist approach against inflation had failed and that reality showed "we must move a lot faster".

Also the cabinet will be reshuffled, with more than half of ministry jobs being axed.

Markets may enjoy some of these announcements, but it will also create political tensions, as Mr Macri will need to fire politicians who are crucial allies to get his reforms approved in Congress. The success of these policies will be tested in the coming days by markets, by the IMF and by the people in the streets.

The finance minister, Nicolas Dujovne, announced measures to cut the country's budget deficit next year in a bid to stop the slide in the peso.

The government hopes to reduce the deficit to zero by 2019.

He criticised the decision to reinstate export taxes, calling it "a hark back to more interventionist policymaking" as practised by Mr Macri's predecessor, Cristina Fernandez de Kirchner.

"It unwinds President Macri's decision to cut agricultural taxes on his first day in office back in December 2015 and liberalise export and import markets. Raising export taxes is against what President Macri stands for," he added. 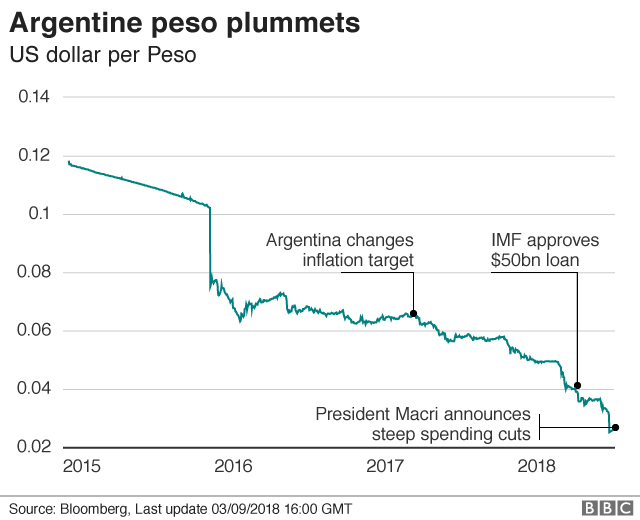 Argentina's currency has lost about half its value this year against the US dollar, despite the central bank raising interest rates to 60%.

Mr Dujovne will travel to Washington on Tuesday to meet the head of the International Monetary Fund (IMF), Christine Lagarde.

In June, Argentina was forced to secure a $50bn loan from the IMF - an organisation still widely loathed in the country, for its perceived role in the country's 2001 economic crisis. 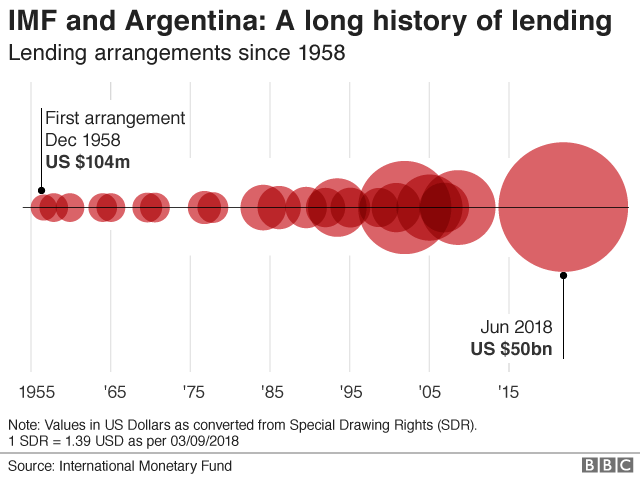 The government said the move was necessary to reassure international investors, after a decrease in farm exports, higher energy prices and a stronger dollar had prompted many to pull funds from the country.

A sudden weakening of the peso followed.

Mr Dujovne's goal is to finalise a deal that would quicken IMF payments to Argentina.

The IMF has asked the country to tackle its large fiscal deficit - a goal usually achieved by reducing government spending. 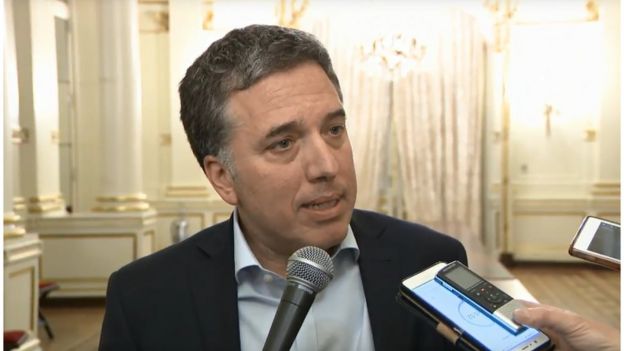 Argentina has been plagued by economic issues for years, and Mr Macri, who was elected three years ago, pledged to reverse years of protectionism under Ms Fernandez.

Her government, which was in power from 2007 until 2015, nationalised companies and heavily subsidised many everyday goods and services, ranging from utilities to football transmissions on television.

Despite rampant inflation, the IMF said last month it expects Argentina's economy to stabilise by the end of the year and a gradual recovery to begin in 2019.

UN to prevent catastrophe in Zimbabwe