Sudan's military leaders have announced an agreement with the opposition alliance for a three-year transition period to a civilian administration.

The Transitional Military Council (TMC) said the alliance would have two-thirds of the seats on a legislative council.

However, the two sides are yet to agree on a sovereign council - the top tier of power, where both want a majority.

Sudan has been ruled by the military council since last month's toppling of President Omar al-Bashir.

Protests that led to his downfall have continued, with a huge sit-in outside the military headquarters to demand full civilian government.

Hours before the latest deal was announced, at least five protesters and a member of the security forces died in clashes in the capital, Khartoum.

What has been agreed?

At a joint news conference on Monday night, Lt Gen Yasser al-Atta said a final agreement on power sharing would be signed with the opposition alliance - the Declaration of Freedom and Change Forces (DFCF) - within 24 hours. That would include the forming of a sovereign council which will rule the country until elections.

"We vow to our people that the agreement will be completed fully within 24 hours in a way that meets the people's aspirations," he said.

Gen Atta said the DFCF would have two-thirds of the seats on a 300-member transitional legislative council, while the rest would be taken by parties not members of the alliance.

Earlier, protest movement spokesman Taha Osman said the sides had agreed on the structure of future authorities - a sovereign council, a cabinet and a legislative body.

DFCF member Satea al-Hajj expressed optimism that the final details on power-sharing would be agreed, adding: "The viewpoints are close and, God willing, we will reach an agreement soon."

The military had originally wanted a two-year transition period while protest leaders had sought four years to give them more time to prepare.

However, Sadiq Yousuf, a member of the DFCF negotiating team, told the BBC Newsday programme that the composition of the 11-member supreme council was still being discussed.

"The issue has been on the number of members of the supreme council. We want eight civilians, three from the military, but they want seven military and four members."

Still unclear who will be in charge

The agreement for a three-year transitional administration including a parliament dominated by opposition groups is a major step towards civilian rule.

A cabinet will also be appointed by the opposition Declaration of Freedom and Change Forces.

But the question of who will be ultimately in charge remains unanswered.

A council of generals is currently the top tier of control.

Who will be on the new executive body to replace it has been a sticking point for some time.

Both the military and the opposition groups want not just representation, but a majority.

The joint news conference by those involved in talks said this would be settled within 24 hours, but protesters remain on the streets until they are sure real and lasting change will come with the new transitional agreement.

In December, demonstrators took to the streets over a government decision to triple the price of bread. The protests soon grew into widespread anger against the president's 30-year rule.

Five weeks into the protests, on 17 January, witnesses said state forces fired live ammunition at protesters and killed a doctor.

He had been treating injured protesters in his home in Khartoum when police reportedly fired tear gas into the building.

He was one of dozens of people killed during the anti-government unrest.

As anger mounted, protesters staged a sit-in from 6 April outside military headquarters in Khartoum to demand the army force the president out.

Five days later, the president was overthrown by the military.

A military council assumed power on 11 April, but demonstrators stayed put, insisting that it transfer authority to a civilian administration.

Initially, talks between the ruling generals and the protest organisers had shown little sign of progress.

Where is Omar al-Bashir?

The ousted leader has not been seen in public since he was removed from office.

He was reportedly moved from the presidential palace to a high security prison in Khartoum, but the BBC has not verified these reports. 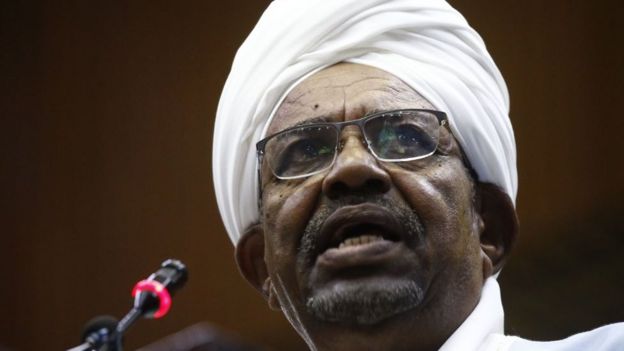 On Monday, Mr Bashir was charged with incitement and involvement in the killing of protesters.

The charges stem from an inquiry into the death of the doctor shot dead during the 17 January protests.

He is also facing an investigation over allegations of money laundering and terror financing.

‘Do not use primaries to blackmail aspirants’
Previous Item
NEXT

Mozambique village 'at risk of famine'
Next Item