South African former President Jacob Zuma says he and his family received death threats after his testimony at an inquiry into corruption under his rule.

He told the judge-led inquiry on Tuesday that the threats had followed his testimony on the previous day.

In the earlier testimony, he said he had been the target of assassination attempts in the past.

He was forced from office in early 2018 amid widespread allegations of cronyism and abuse of power - which he denies.

Mr Zuma was replaced by his then deputy Cyril Ramaphosa, who promised to tackle corruption and described his predecessor's nine years in office as "wasted".

On Monday Mr Zuma, 77, said the allegations were part of a decades-long "conspiracy" to remove him from the political scene.

The inquiry is investigating allegations that Mr Zuma oversaw a web of corruption during his term in office.

The accusations focus on his relationship with the controversial Gupta family, which was accused of influencing cabinet appointments and winning lucrative state tenders through corruption.

Both Mr Zuma and the family deny any wrongdoing.

The inquiry got off to a dramatic start as Mr Zuma told the judge that his personal assistant had received a phone call threatening to kill him and his children. His lawyer was also threatened, Mr Zuma said.

Raymond Zondo, the country's deputy chief justice who is chairing the inquiry, said that death threats were "totally unacceptable" and it was important to protect witnesses.

In his testimony, Mr Zuma emphatically denied that he had discussed cabinet appointments with the Gupta family. 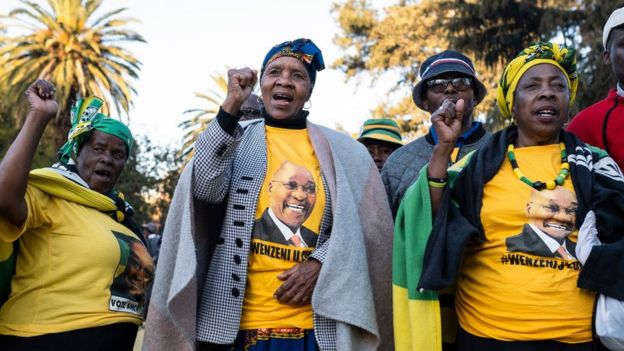 Zuma supporters attended his speech following the inquiry on Monday

Zuma on the 'conspiracy' against him

"I have been vilified, alleged to be the king of corrupt people," Mr Zuma told the inquiry on Monday.

He lashed out at what he said was a decades-long conspiracy against him.

He implied that the UK and US had been - and still were - part of an elaborate plot to discredit him, even as he tried to bring about political and economic change in South Africa.

Other foreign trained agents had tried to poison him, Mr Zuma said, without naming them.

We shall peacefully snatch Asawase seat