Boris Johnson is meeting Emmanuel Macron in Paris for Brexit talks, with the French president saying the UK's vote to quit the EU must be respected.

But he added that the Ireland-Northern Ireland backstop plan was "indispensable" to preserving political stability and the single market.

The backstop, opposed by Mr Johnson, aims to prevent a hard border on the island of Ireland after Brexit

Mr Johnson said that with "energy and creativity we can find a way forward".

On Wednesday German Chancellor Angela Merkel said the onus was on the UK to find a workable plan.

UK Prime Minister Mr Johnson insists the backstop must be ditched if a no-deal exit from the EU on 31 October is to be avoided, arguing that it could leave the UK tied to the EU indefinitely.

But the EU has repeatedly said the withdrawal deal negotiated by former PM Theresa May, which includes the backstop, cannot be renegotiated.

However, it has previously said it would be willing to "improve" the political declaration - the document that sets out the UK's future relationship with the EU.

What lies behind the friendly welcome?

The handshake between the PM and the president was warm and long-lasting. But it was the words which mattered.

President Macron said that, while he had been portrayed as the "hard boy" of the EU, he was simply being clear about where he stood.

He described the backstop both as an "indispensable guarantee" of "stability in Ireland" and the means of protecting the integrity of the European single market.

But the expectation that he'd refuse point-blank to renegotiate the Brexit deal didn't materialise.

Instead, he simply warned that any withdrawal agreement that the two sides might reach in the next month wouldn't be very different from the existing one. And he asked for more "visibility" from the UK on its alternative proposals.

Speaking after he greeted Mr Johnson at Paris's Elysee Palace, Mr Macron said he was "very much confident" that the UK and EU would be able to find a solution within 30 days - a timetable suggested by Mrs Merkel - "if there is a good will on both sides".

He said it would not be possible to find a new withdrawal agreement "very different from the existing one" within that time, but added that an answer could be reached "without reshuffling" the current deal.

He also denied that he was the "hard boy in the band", following suggestions that he would be tougher on the UK than his German counterpart.

Standing beside Mr Macron, Mr Johnson said he had been "powerfully encouraged" by his conversations with Mrs Merkel in Berlin on Wednesday.

He emphasised his desire for a deal with the EU but added that it was "vital for trust in politics" that the UK left the EU on 31 October.

He also said that "under no circumstances" would the UK put checks or controls on the Ireland-UK border. 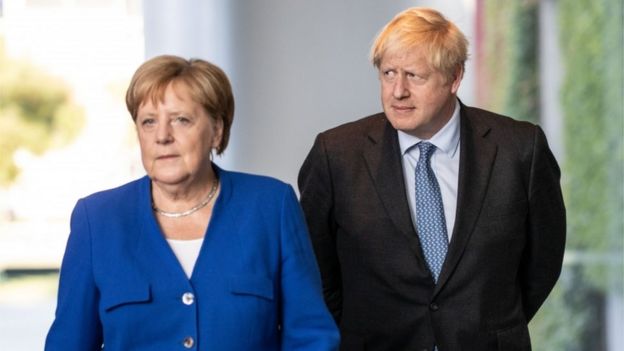 If implemented, the backstop would see Northern Ireland staying aligned to some rules of the EU single market, should the UK and the EU not agree a trade deal after Brexit.

It would also see the UK stay in a single customs territory with the EU, and align with current and future EU rules on competition and state aid.

These arrangements would apply until both the EU and UK agreed they were no longer necessary.

Mrs Merkel has argued that the withdrawal agreement does not need to be reopened if a practical solution to the backstop crisis can be found.

The UK is due to leave the EU on 31 October, with no deal being the default option.

Mr Macron said he saw no reason to grant a further delay to Brexit - which has twice been postponed -unless there was a significant political change in the UK, such as an election or a new referendum.

But French officials said if the UK requested an extension in order to hold a new election, the EU would probably grant it.

After his talks with Mr Macron, Mr Johnson will attend the G7 summit on Saturday alongside other leaders including US President Donald Trump.

Mr Corbyn has proposed that in order to prevent a no-deal exit, opposition MPs should help him defeat the government in a no-confidence motion and install him as a caretaker PM.

If he wins the vote, he plans to delay Brexit, call a snap election and campaign for another referendum.

However, the Liberal Democrats, and some potential Tory allies opposed to a no-deal exit, have indicated they will not back a plan that leads to Mr Corbyn in No 10.

The prime minister has said he wants to leave the EU with a deal, but that the UK would be ready for a no-deal Brexit.

We wont be an obstructionist minority

What Are Chinese Communists Striving For?