Migration experts say the UK cannot end freedom of movement from the EU on Brexit day because it has no system to work out who is legally in the country.

The Home Office said on 19 August that EU freedom of movement would end immediately in a no-deal Brexit.

But Oxford University's Migration Observatory said employers will have no way to tell whether EU nationals have arrived after 31 October.

It comes as official figures show EU immigration at its lowest since 2013.

Under the existing system, EU nationals do not have to register their presence in the UK so the Home Office does not have records of when they arrived.

Madeleine Sumption, director of the Migration Observatory, said: "Even if the government knew exactly what it wanted the post-Brexit immigration system to look like, it wouldn't be possible to implement it immediately after a no-deal Brexit.

"That's because any new restrictions on EU migration can't be enforced unless UK employers know which EU citizens have been here for years and which ones arrived post-Brexit and have to comply with the new immigration regime."

The government's only way to assess which EU citizens had a right to be in the UK would be through the settlement scheme, which closes in December 2020, the Migration Observatory team said.

The settlement scheme aims to register EU nationals in the country, but there is no obligation for all of them to take part.

As of July, only a third of the estimated 3.3 million UK-based EU citizens had applied, leaving more than two million unregistered.

The warning comes after the Office for National Statistics conceded that its key migration figures were no longer reliable and should only now be regarded as "experimental".

What are the problems with the migration figures?

The ONS revealed on Wednesday that it had been underestimating EU arrivals and overestimating those from the rest of the world.

It now believes EU net migration - the difference between people arriving and leaving - was 16% higher (29,000) in 2015-16 than previously thought.

Net migration from outside the EU was 13% (25,000) lower, because more foreign students left than previously estimated. 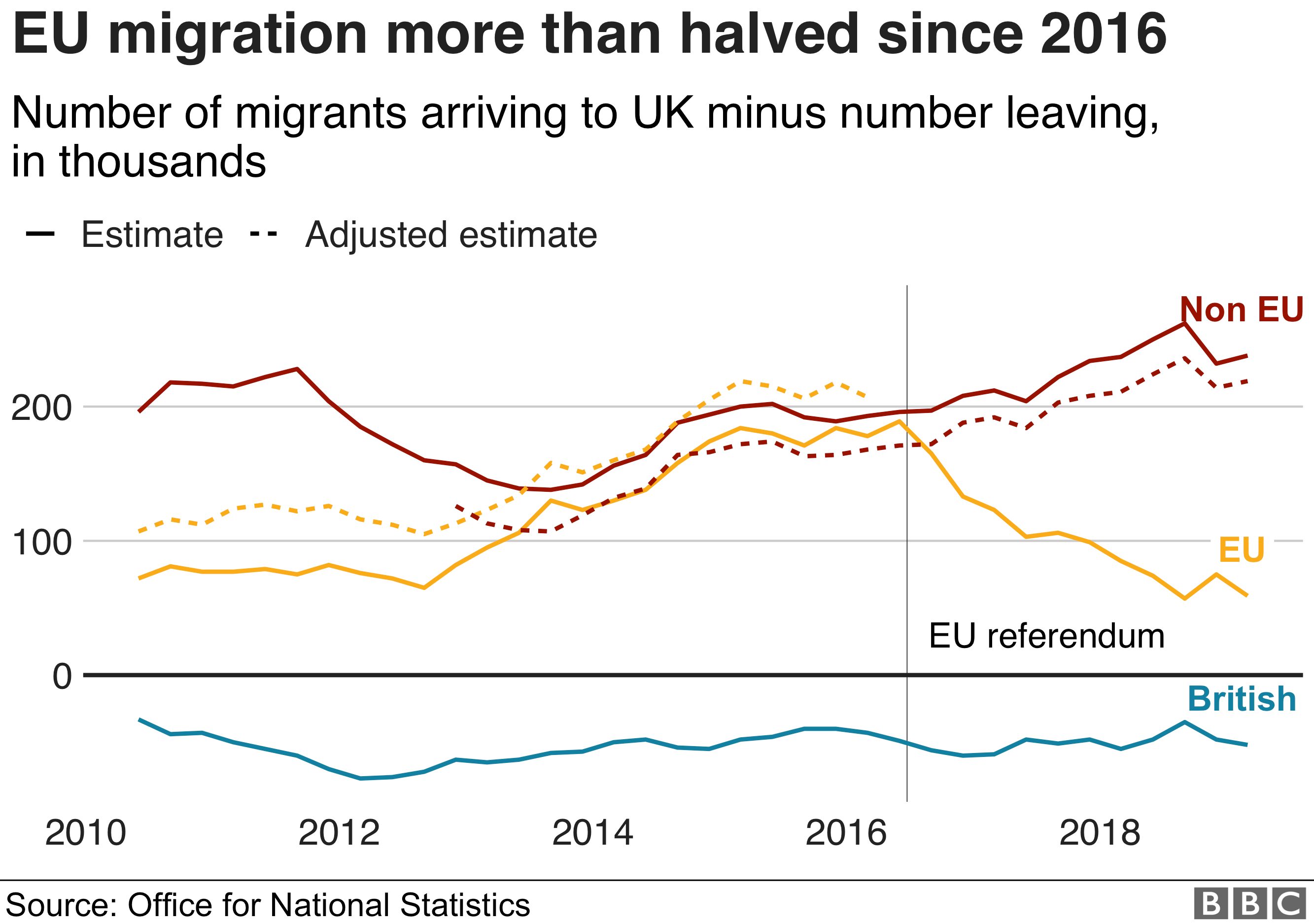 The ONS has used additional data from the Home Office and the Department for Work and Pensions in an attempt to make the adjusted figures more reliable.

But statisticians have not yet adjusted the figures for EU immigration after 2016.

That is partly because EU citizens interviewed for the survey may not be sure if they are staying in Britain for at least 12 months - the cut-off point for inclusion in the data.

What do the latest migration figures say?

The ONS estimates that EU migration is now at its lowest level since 2013, with 200,000 EU citizens arriving in the year up to March 2019 - the original date for Brexit.

It says the main reason for the decline is that fewer people are arriving from the EU to work, with the numbers more than halving to 92,000 from their peak in 2016.

Ms Sumption at the Migration Observatory said: "The drop in the value of sterling has made working in the UK less lucrative than it once was, and continued uncertainty about the Brexit may also have played a role."

More Central and Eastern Europeans are leaving than are arriving - causing a net fall in the numbers from eight countries, including Poland, of 7,000. That confirms a trend that began a year ago. 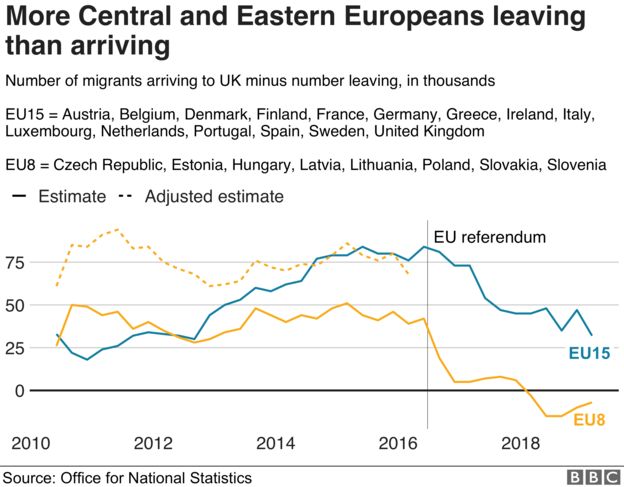 But the overall net migration total to the UK was 226,000 - which includes arrivals from all over the world and returning British citizens. That is more than 100,000 lower than the record figure in the year before the referendum.

'I will beat Titus-Glover easily'
Next Item