The Amazon in Brazil is on fire - how bad is it?

Thousands of fires are ravaging the Amazon rainforest in Brazil - the most intense blazes for almost a decade.

The northern states of Roraima, Acre, Rondônia and Amazonas have been particularly badly affected.

However, images purported to be of the fires - including some shared under the hashtag #PrayforAmazonia - have been shown to be decades old or not even in Brazil.

So what's actually happening and how bad are the fires?

There have been a lot of fires this year

The National Institute for Space Research (Inpe) says its satellite data shows an 85% increase on the same period in 2018.

The official figures show more than 75,000 forest fires were recorded in Brazil in the first eight months of the year - the highest number since 2013. That compares with 40,000 in the same period in 2018. 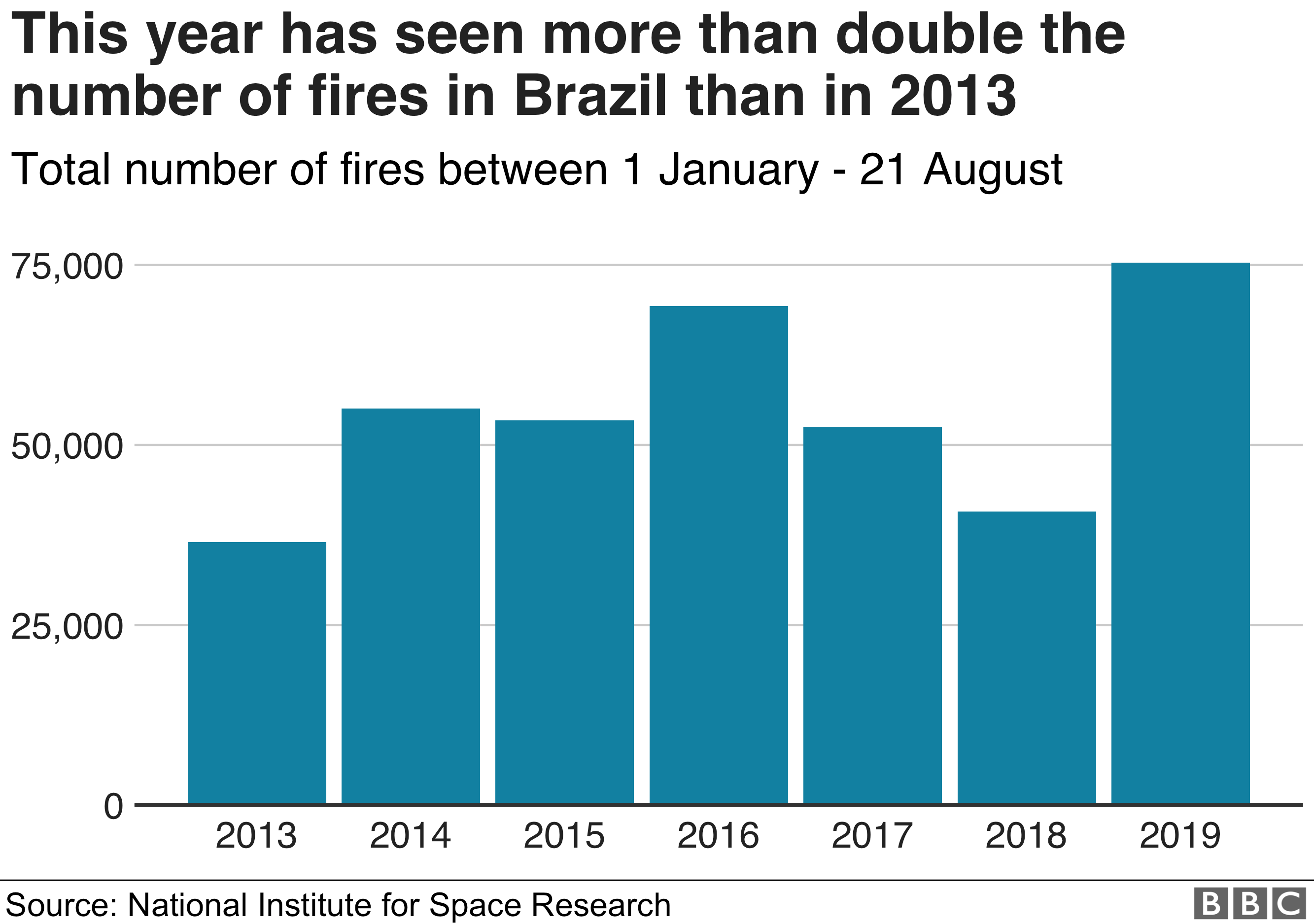 Forest fires are common in the Amazon during the dry season, which runs from July to October. They can be caused by naturally occurring events, such as by lightning strikes, but also by farmers and loggers clearing land for crops or grazing. 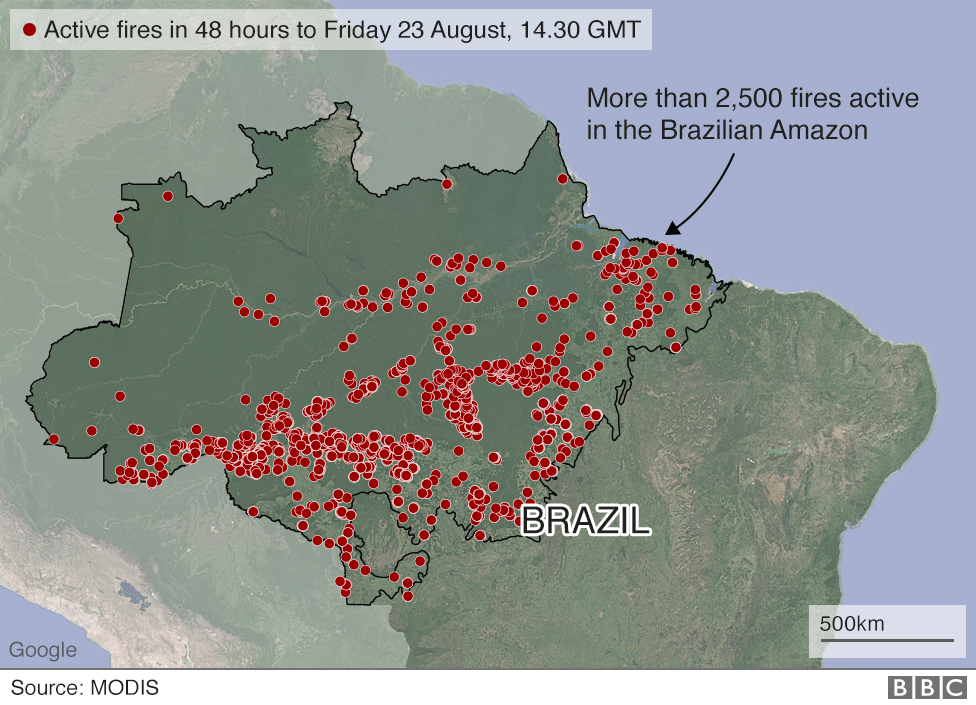 In response, Mr Bolsonaro, a long-time climate change sceptic, accused non-governmental organisations of starting the fires themselves to damage his government's image.

He later said the government lacked the resources to fight the flames.

The north of Brazil has been badly affected

Most of the worst-affected regions are in the north of the country.

Roraima, Acre, Rondônia and Amazonas all saw a large percentage increase in fires when compared with the average across the last four years (2015-2018). 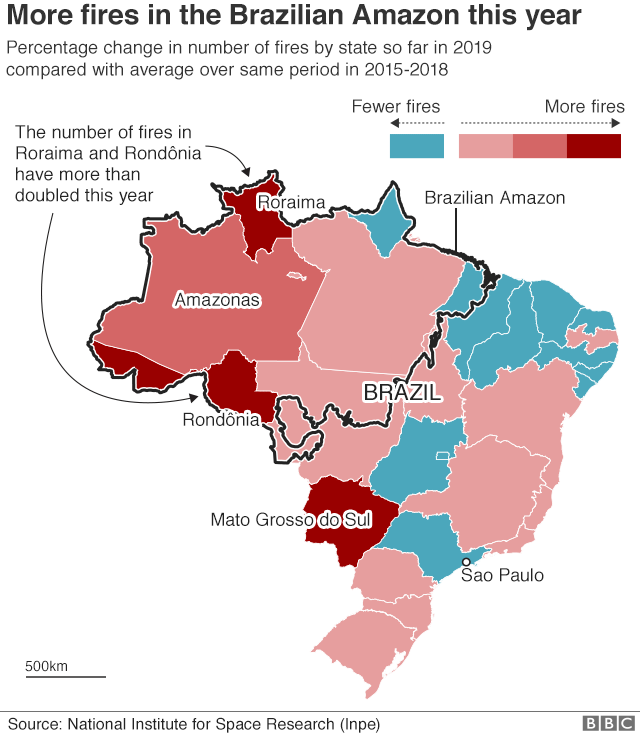 Amazonas, the largest state in Brazil, has declared a state of emergency.

The fires are emitting large amounts of smoke and carbon

Plumes of smoke from the fires have spread across the Amazon region and beyond.

According to the Copernicus Atmosphere Monitoring Service (Cams), a part of the European Union's Earth observation programme, the smoke has been travelling as far as the Atlantic coast. 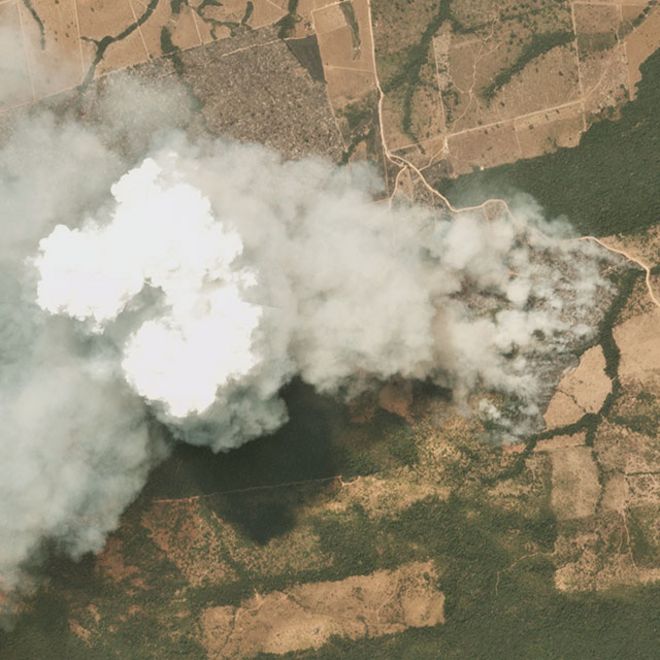 Some of the fires, such as this one in Mato Grosso, cover a number of acres

The fires have been releasing a large amount of carbon dioxide, the equivalent of 228 megatonnes so far this year, according to Cams, the highest since 2010.

They are also emitting carbon monoxide - a gas released when wood is burned and does not have much access to oxygen. 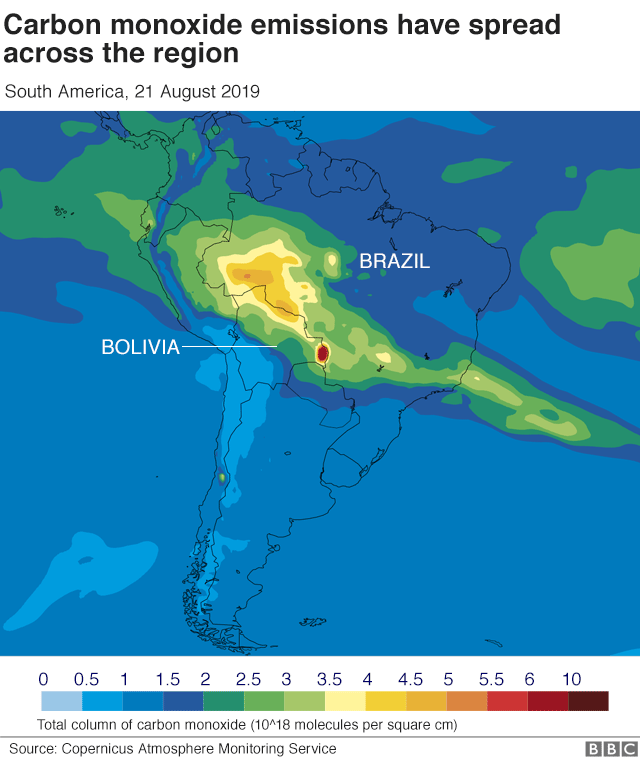 The Amazon basin - home to about three million species of plants and animals, and one million indigenous people - is crucial to regulating global warming, with its forests absorbing millions of tonnes of carbon emissions every year.

But when trees are cut or burned, the carbon they are storing is released into the atmosphere and the rainforest's capacity to absorb carbon emissions is reduced.

The Amazon Environmental Research Institute (Ipam) has stated the recent increase in the number of fires in the Amazon is directly related to deliberate deforestation.

While the exact scale of deforestation in the rainforest will only be certain when 2019 figures are published at the end of the year, preliminary data suggests a significant rise.

The National Institute for Space Research (Inpe) tracks suspected deforestation in real-time using satellite data, sending out alerts to flag areas that may have been cleared.

How bad were fires in the previous years?

While the number of fires in Brazil is at its highest level for almost a decade, the data suggests that Brazil - and the wider Amazon region - may have experienced more intense burning in the past.

An analysis of NASA satellite data last week indicated that the total fire activity in 2019 across the Amazon, not just Brazil, is close to the average when compared with a longer 15 year period.

Looking specifically at Brazil, figures from Cams going back to 2003 show that the total CO2 equivalent emissions, used to measure of the amount and intensity of fire activity, are at their highest since 2010.

But according to the data, emissions in Brazil were higher in the mid-2000s, as the chart below indicates. 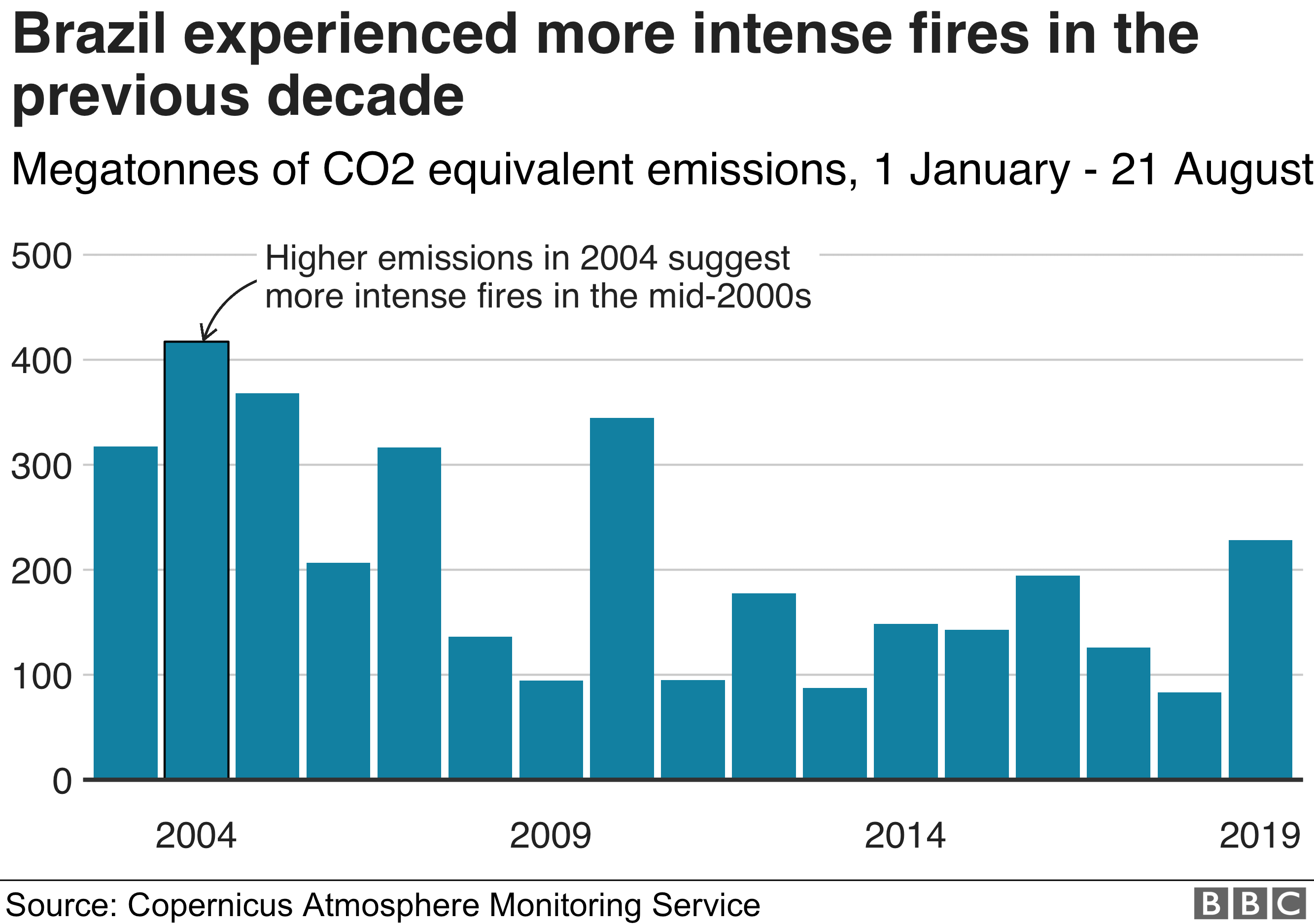 Other countries have also been affected by fires

A number of other countries in the Amazon basin - an area spanning 7.4m sq km (2.9m sq miles) - have also seen a high number of fires this year. 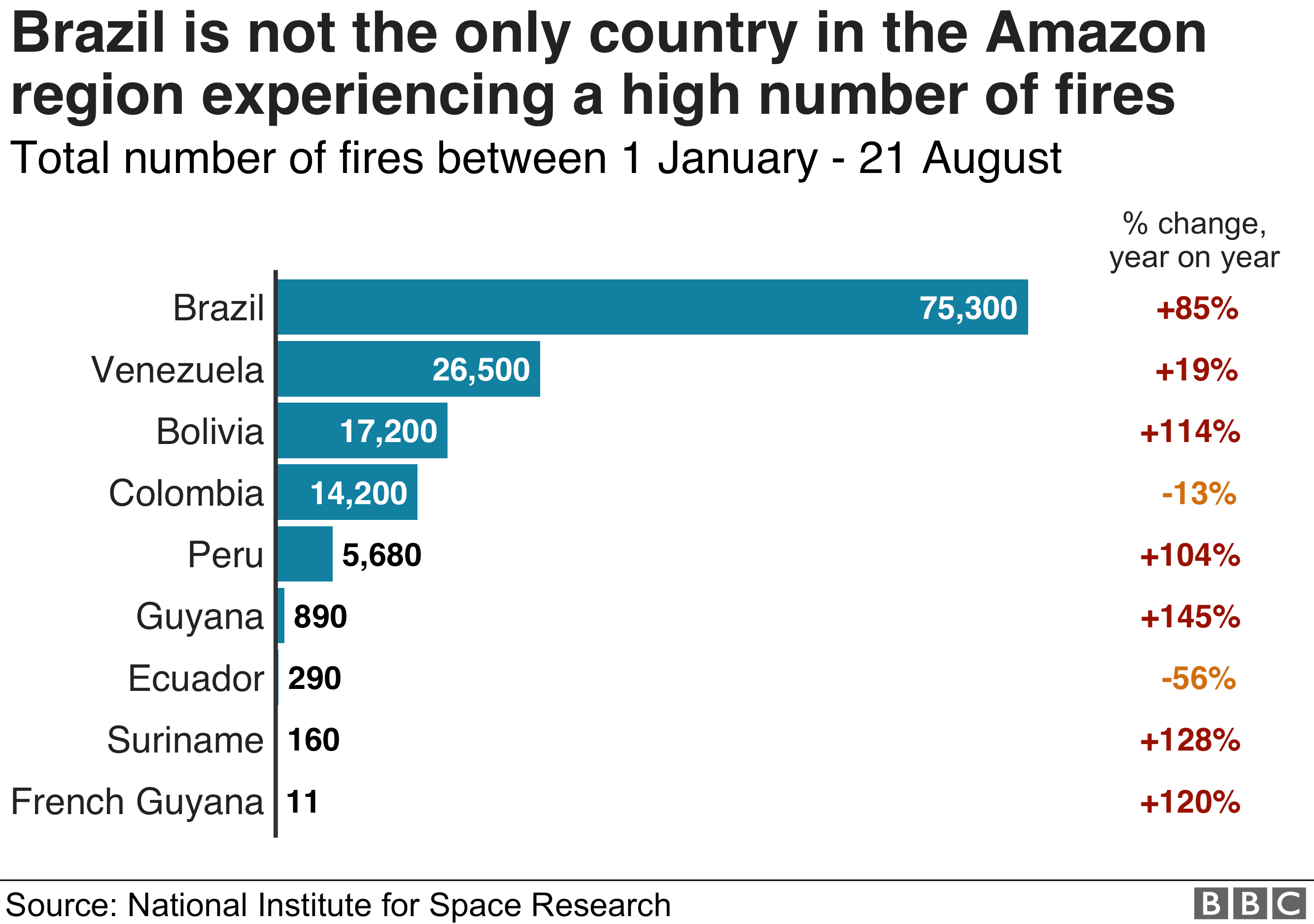 The Bolivian government has hired a fire-fighting airtanker to help extinguish fires in the east of the country.

Extra emergency workers have also been sent to the region, and sanctuaries are being set up for animals escaping the flames.

MMDAs must be part of essential workers

Tanzania: Campaign for education on COVID-19

India to release supply of hydroxychloroquine

US names Nigerians in massive fraud
Next Item