Prosecutors in Sweden have dropped an investigation into a rape allegation made against Wikileaks co-founder Julian Assange in 2010.

Assange, who denies the accusation, has avoided extradition to Sweden for seven years after seeking refuge at the Ecuadorean embassy in London in 2012.

The 48-year-old Australian was evicted in April and sentenced to 50 weeks in jail for breaching his bail conditions.

He is currently being held at Belmarsh prison in London.

The Swedish investigation had been shelved in 2017 but was re-opened earlier this year following his eviction from the embassy.

Separately, the US is seeking Assange's extradition from the UK over his alleged role in the release of classified military and diplomatic material by Wikileaks in 2010.

What did the prosecutors say?

"The reason for this decision is that the evidence has weakened considerably due to the long period of time that has elapsed since the events in question," it added. 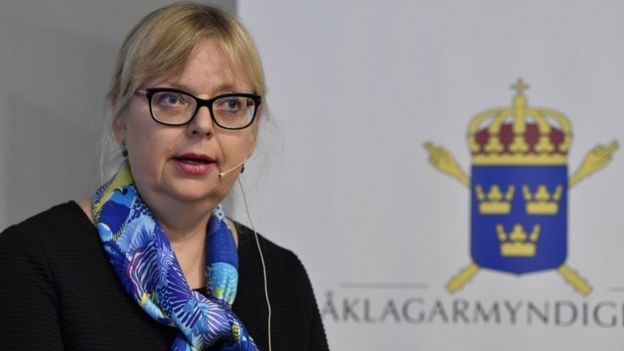 Ms Persson said: "I would like to emphasise that the injured party has submitted a credible and reliable version of events.

"Her statements have been coherent, extensive and detailed; however, my overall assessment is that the evidential situation has been weakened to such an extent that that there is no longer any reason to continue the investigation."

Separately, the prosecutors held a news briefing in the Swedish capital Stockholm, saying that the decision to drop the inquiry had been taken after interviews with seven witnesses in the case.

What was the Swedish investigation about?

Assange was accused of rape by a woman and sexual assault by another one following a Wikileaks conference in Stockholm in 2010. He has always denied the allegations, saying the sex was consensual.

He also faced investigations for molestation and unlawful coercion, but these cases were dropped in 2015 because time had run out.

There was no immediate comment from Assange but Wikileaks welcomed the Swedish move to drop the investigation.

Wikileaks editor-in-chief Kristinn Hrafnsson said: "Let us now focus on the threat Mr Assange has been warning about for years: the belligerent prosecution of the United States and the threat it poses to the First Amendment."

What charges does Assange face in the US?

Australian-born Assange faces a charge of conspiracy to commit computer intrusion in the US.

He is accused of participating in one of the largest ever leaks of government secrets, which could result in a prison term of up to five years.

In June, the then UK Home Secretary, Sajid Javid, formally approved an extradition request from the US.

How close are we to a pandemic?