World leaders are gathering in Jerusalem for the 75th anniversary of the liberation of the Auschwitz death camp in Nazi-occupied Poland.

More than a million people, mostly Jews, were murdered there by the Nazis during World War Two.

The event at the Yad Vashem Holocaust memorial will include speeches by the Russian and French presidents, as well as by the Prince of Wales.

But it has been overshadowed by the absence of the Polish president.

Andrzej Duda is staying away in protest at not being invited to speak unlike his Russian counterpart Vladimir Putin, who he has accused of distorting the history of the Holocaust and the war to attack Poland.

The Fifth World Holocaust Forum is the largest diplomatic event in Israel's history.

The organisers say the focus will be on fighting anti-Semitism today.

"We must use this event as a crucial and defining moment to build a global coalition of leaders who will send a strong and united message that anti-Semitism, in all of its forms, will not be tolerated and those who perpetrate it will be met with zero tolerance," said Moshe Kantor, head of the World Holocaust Forum Foundation.

'Politics of remembrance on display'

This is a big event in a small country: Dozens of heads of state and heads of government are arriving at the site simultaneously.

Each world leader will lay a wreath and the 700-strong audience will hear music composed by Viktor Ullmann, who was murdered in the gas chambers of Auschwitz in 1944. 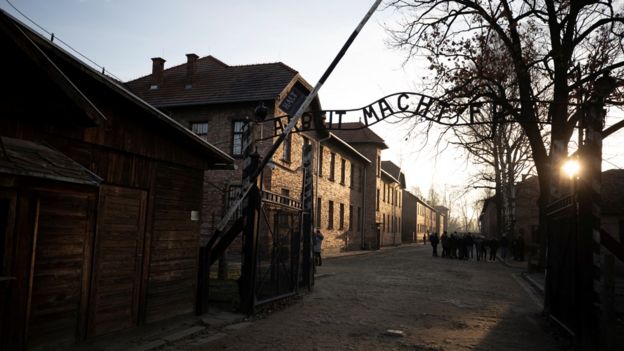 More than a million people, mostly Jews, were murdered at Auschwitz-Birkenau

Yad Vashem was established to preserve the memory of the Holocaust; stories of the industrial scale murder of Jews are all around - some embedded into the stone walls as you walk around.

But the politics of remembrance is on display too.

Outside a banner has been put up reading: "Cease this 'Holocaust party!" - the protesters are angry that too many survivors are living in poverty.

For some, this ceremony is more about the politicians of today than the crimes of the past.

The event will open with an address by Israel's President, Reuven Rivlin.

There will also be speeches by representatives of the allied powers that defeated Nazism - although Germany's president will speak too.

The decision not to give the podium to Mr Duda sparked fury in Poland.

Polish Prime Minister Mateusz Morawiecki told the BBC on Tuesday that it showed "disrespect to Poland and to all the heroes from the Second World War".

Mr Putin claimed recently that Poland was complicit in the outbreak of World War Two, and while excusing Russian dictator Stalin's early pact with Hitler he described Poland's 1930s ambassador to Nazi Germany as "a scumbag and an anti-Semitic pig".

Mr Morawiecki responded with a furious four-page statement that accused Mr Putin of lying about Poland and "trying to rehabilitate" Stalin for his political goals today.