Coronavirus: A Cameroon student on how he recovered

When Kem Senou Pavel Daryl, a 21-year-old Cameroonian student living in the Chinese city of Jingzhou, contracted the coronavirus he had no intention of leaving China, even if that were possible.

"No matter what happens I don't want to take the sickness back to Africa," he said from his university dormitory, where he is now under a 14-day quarantine.

He was suffering from a fever, a dry cough, and flu-like symptoms.

When he became ill he thought of his time as a child in Cameroon when he contracted malaria. He feared the worse.

"When I was going to the hospital for the first time I was thinking about my death and how I thought it was going to happen," he said.

For 13 days he remained in isolation in a local Chinese hospital. He was treated with antibiotics and drugs typically used to treat HIV patients. After two weeks of care he began to show signs of recovery.

The CT scan showed no trace of the illness. He became the first African person known to be infected with the deadly coronavirus and the first to recover. His medical care was covered by the Chinese state. 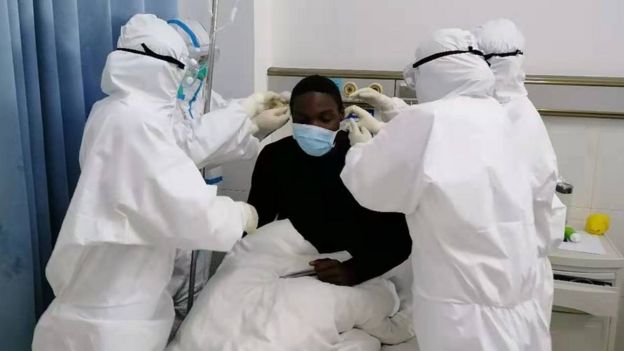 Egypt has become the first country in Africa to confirm a case of the coronavirus. Health professionals warn that countries with weaker health systems may struggle to cope with a potential outbreak of the illness, which has led to more than 1,770 deaths and infected more than 72,000 people, mostly in China.

"I don't want to go home before finishing studying. I think there is no need to return home because all hospital fees were taken care of by the Chinese government," says Mr Senou.

To evacuate or not?

Since late January governments around the world, led by the US, began evacuating their citizens out of Wuhan and neighbouring cities.

But thousands of African students, workers and families, remain in lockdown across the central Hubei province - the outbreak began in the provincial capital Wuhan - and some think their governments should do more to help them.

"We are sons and daughters of Africa but Africa is not willing to come to our rescue when we need it the most," says Tisiliyani Salima, a medical student at Tongji Medical University and president of the Zambian Wuhan student association.

Learn more about the new virus

For close to a month Ms Salima has been living in self-quarantine.

Time has begun to lose meaning for the 24-year old student. She spends her days sleeping and checking updates on Chinese social media apps.

She acts as the liaison between her embassy and the 186 Zambian students living under quarantine in Wuhan. Many worry about food safety, supplies, and lack information in a city that this week has seen an average of 100 deaths a day.

She watched other international classmates evacuated from the city while her countrymen and women were left behind.

"South of the Sahara most African countries have had a similar response," says one student who agreed to talk under the condition of anonymity. 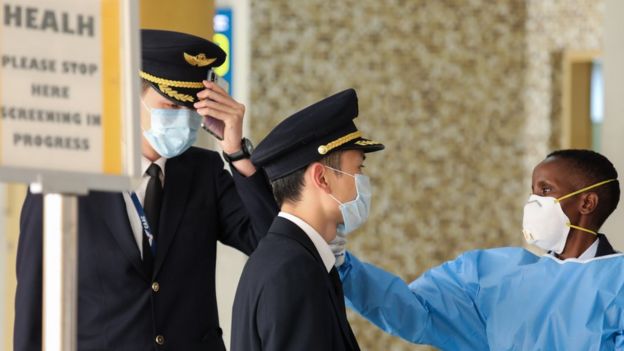 China is currently Africa's largest trading partner and the ties between the two have blossomed in recent years.

In the process China has become home to 80,000 African students, many attracted to the middle kingdom by scholarship programmes. But community leaders say families, young and old are stranded in Hubei province with little aid or assistance from their governments.

"People are saying: 'Don't bring us back because Nigeria can't handle us.' I feel conflicted but at the end of the day I am also human," says Angela, a recent graduate from Nigeria, who only gave her first name.

"I would appreciate if they would recognise that there are Nigerians here but we don't seem to be a priority. We didn't get any response from our government," she says.

Last week, for the first time in 22 days in lockdown, dwindling supplies forced Angela to venture out of her apartment to buy some essentials.

"The city is like a ghost town. When I left my complex I didn't know if I would even be allowed back in. People are checking temperatures outside the gate," she says in a phone interview from her apartment. 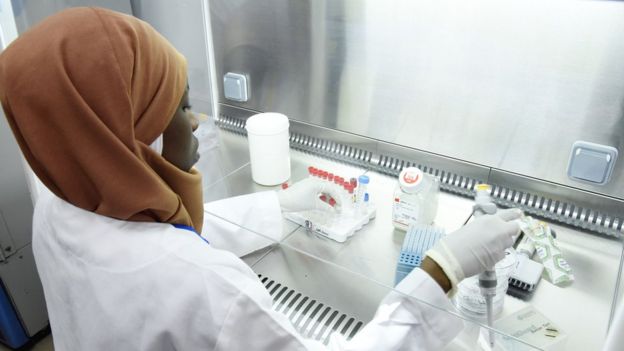 Image caption The Institut Pasteur de Dakar, in Senegal, is one of the laboratories that has the reagents needed to test samples

On 30 January the Cameroonian community penned an open letter to the president urging their government to evacuate citizens stuck in the epicentre of the outbreak.

Weeks on Dr Pisso Scott Nseke, a community leader in Wuhan, says Cameroonians are still waiting for a response.

He accepts that the community is not united in the desire to be evacuated but says they are disappointed by the lack of assistance from the government.

As of mid-February, Egypt, Algeria, Mauritius, Morocco and Seychelles had moved their citizens out of Hubei province.

Other nations such as Ghana and Kenya are reportedly considering evacuating.

Some nations have sent financial support to their citizens.

According to the head of the Ivory Coast student association in Wuhan $490 ($380) was given to the 77 Ivoirians in the city following weeks of discussions with their government. But many are growing increasingly frustrated by their government's stance.

Ghana has reportedly sent financial assistance to its nationals as well.

"Staying here doesn't guarantee our safety. We are just in a country that has better medical facilities," says Ms Salima.

"We feel abandoned. The Chinese clearly were angered by the Americans pulling their people out as they felt it caused panic," said one student who agreed to talk on the condition of anonymity. "There is a lot of distrust here of the authorities," he added.

Some are calling for a continent-wide strategy to help African nationals in China.

"The decision to evacuate is not a question of 'solidarity' with China or the lack of it. It is the responsibility of every country to ultimately look after the health of their citizens wherever they are, including in China," says Hannah Ryder from Development Reimagined, a Beijing-based international development consultancy.

As for Mr Senou, he says has no plans to return to Cameroon.

"It would be a bad and dangerous idea. The biggest fear I had from the virus was psychological and emotional. Going back home is not an option now."

Kabuga wins appeal to be tried

Nigerian soldiers not told to shoot

Getting Africans Ready for 4IR
Previous Item
NEXT

Stop Locusts In East Africa Now Or ...-WFP
Next Item