Pep Guardiola, Rafa Benitez, Mauricio Pochettino, Unai Emery... the list of high-achieving managers spawned by Spanish football is long and illustrious, and in the last decade no fewer than 14 current Premier League teams have been led by a man whose formative years came in La Liga.

But the next great coach to emerge from Spain could well be someone you have not yet heard of: Quique Setien.

The Real Betis boss, who will this weekend attempt to topple faltering Real Madrid, has been earning plaudits not only for his team's results but also for his playing style.

Setien has already been linked with Barcelona, and he could soon be in demand from lots more big clubs.

But who is he, and why is he so highly rated?

Setien might be a new name in the upper echelons of the coaching world, but he is far from a new face - in fact he is 60 years old, and has made a slow and steady ascent up the managerial ladder.

After a long playing career as a cultured midfielder with Racing Santander and Atletico Madrid, winning a handful of international caps in the mid-80s, his managerial days started at former club Racing in 2001.

A few more appointments followed before he truly established himself with a long stint at lowly Lugo, leading the third tier club to promotion in 2012 and then stabilising their position in the Segunda Division.

A couple of top-flight seasons with Las Palmas followed, taking the Canary Islanders to creditable mid-table finishes, before he joined Betis 18 months ago and enjoyed immediate success: they finished sixth last season and have maintained that standard in this campaign, currently sixth in La Liga and into the Europa League knockout stages after topping a group also containing AC Milan.

There have been plenty of eye-catching results, including away victories over Real Madrid, Barcelona and crosstown rivals Sevilla, and now expectations are rising that Setien could lead Betis into the Champions League or to their first trophy since 2005.

But if Betis do achieve anything like that, their coach may not stay around to enjoy it. 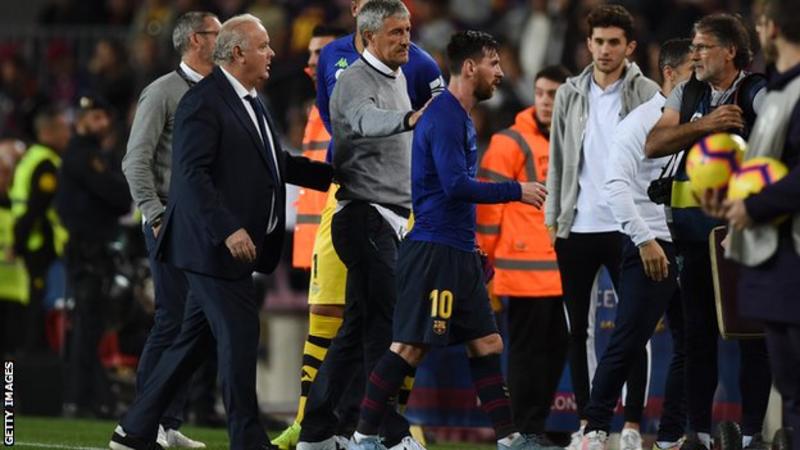 Even more than his notable results, Setien's growing army of admirers are deeply impressed with the playing style he instils, which - in the mould of Pep Guardiola - is heavily focussed upon short passing and high pressing.

Like Guardiola, his football philosophy is firmly rooted in Johan Cruyff's Barcelona teams he faced during his playing days, and right from the start of his coaching career he has remained fiercely wedded to those principles.

The word Setien uses perhaps more than any other is bravery - not in the physical sense, but having the courage to trust your technique and use the ball carefully and positively, whatever your position on the pitch. 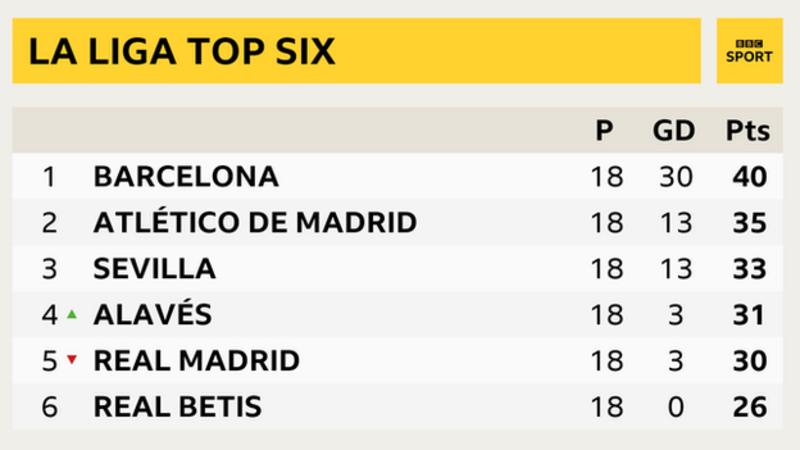 His teams play out from defence in a way that many other managers - and fans who are not used to the sight - would regard as intolerably risky.

The stats illustrate Setien's style: Betis have the second-highest average possession percentage in La Liga (61.1%, just behind Barcelona's 61.7%) and the third-highest pass completion rate (87.4%). Defenders Marc Bartra and Aissa Mandi are both in the top six for passes played, and goalkeeper Pau Lopez has passed more than any other shot-stopper.

His players love getting so many touches of the ball and being given the freedom to express themselves, with veteran winger Joaquin - an idol among Betis fans - capturing the sentiments of the dressing room by stating that playing under Setien has added years to his career.

And a few hundred miles to the north, another group of players appear to approve…

The greatest exposition of Setien's approach came in November, when Betis produced a glorious performance to win 4-3 at Barcelona, handing the reigning champions their first league loss at the Nou Camp for more than two years with a thrillingly daring display which even earned applause from the defeated home fans.

Setien later claimed that his late mentor Cruyff would have been happy to see Barca lose against such an opponent, and the victorious manager was given a significant seal of approval in the form of Sergio Busquets.

The experienced midfielder handed Setien a signed shirt after the game with an effusive personal message: "To Quique, with appreciation and admiration for your way of seeing football."

Of course, Busquets politely giving Setien a signed shirt doesn't mean he is destined to take over the Nou Camp managerial reigns, but it would be a logical stylistic fit - and the position may well become vacant, with incumbent Ernesto Valverde recently raising eyebrows by admitting he doesn't know whether he will be at the club next season. 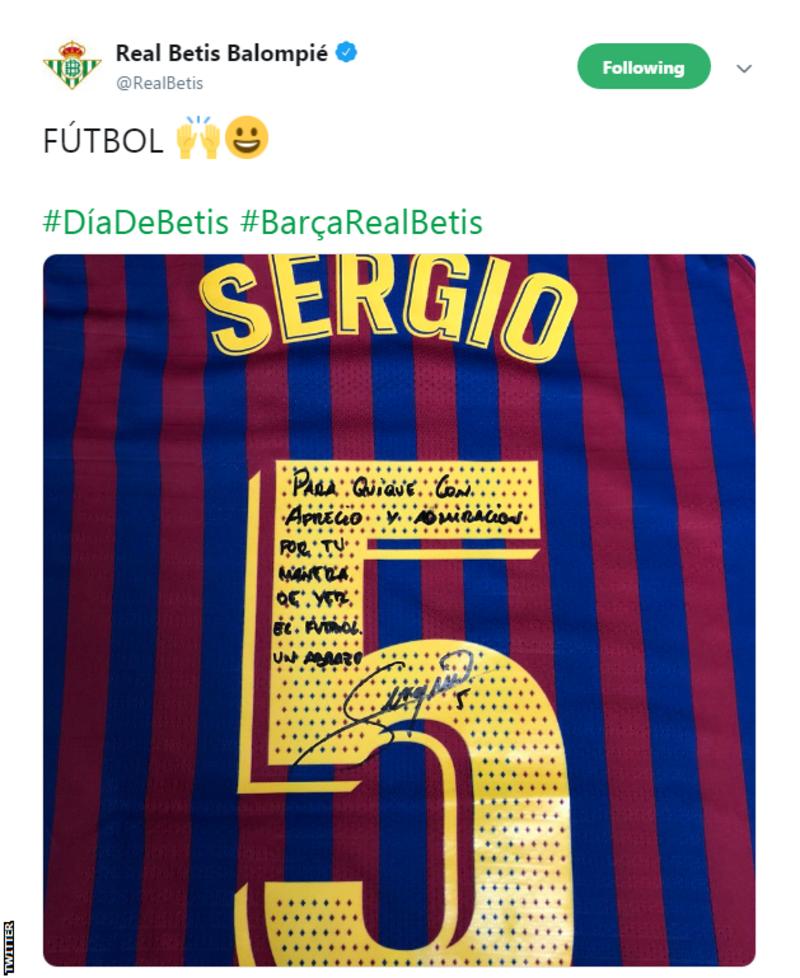 Busquets' message reads: "To Quique, with appreciation and admiration for your way of seeing football. A hug".

Setien diplomatically dismisses the question whenever it arises, but he would surely love to join a club which suits his philosophy more closely than any other. And he perhaps inadvertently let slip his true feelings by noting that his central defender Marc Bartra - a former Barca academy graduate - "must be doing something wrong" if he is playing for Betis rather than a bigger club.

He apologised for the ill-chosen words and the matter was forgotten, but it posed the question: if Setien believes his players could be capable of moving onto better things, surely the same applies to him?

Barcelona is by no means his only possible destination. It seems that Real Madrid boss Santiago Solari will struggle to remain in position beyond this campaign, although a tactically radical coach like Setien would be an unusual move for Real president Florentino Perez.

Setien could also, for the first time in his career, leave Spain. He enjoys other leagues and speaks a decent level of English and Italian, once revealing he communicated with former Tottenham and Portsmouth midfielder Kevin-Prince Boateng in those languages during their time together at Las Palmas.

An outsider for Old Trafford, perhaps…?

It's by no means certain, however, that Setien will choose to leave.

Betis are far bigger than most people outside Spain realise, attracting an average league attendance this season of more than 46,000 - the fourth-highest in Spain.

Setien has repeatedly expressed his admiration for the work undertaken by Diego Simeone at Atletico Madrid, and the idea of attempting to emulate that feat and turning himself into a Betis legend by converting the club into contenders for major honours would be highly appealing.

In any case, he might be deemed too much of a gamble by the biggest clubs because, for all the splendour of his football, he has never won a major trophy.

Enrique Sanchez, a long-standing Betis season-ticket holder, summarised the views of many fans by evaluating Setien's work so far as "excellent" but also expressing a few reservations.

"When there are great victories like at the Bernabeu and the Camp Nou everyone praises him," Sanchez told BBC Sport. "But there are also spells when he's not capable of beating teams like Getafe and Eibar."

Sanchez also points out that Setien's cause at Betis has been greatly helped by serious investment into the squad, with only three players remaining from the 2016-17 campaign.

And he believes the coach may need more time to prove himself worthy of taking over at an elite club like Barcelona, saying: "Another couple of years at Betis would show he can continue to grow. He has no experience of winning anything and we haven't even seen his team in a knockout cup tie."

The problem with that, however, is that Setien is already 60 and time could be running out before he's deemed too old for a major post. If he is to move, this summer could be his last real chance - and another high-profile victory over Real Madrid this weekend would surely convert a few more believers.

We need time to build our players

Rice not daunted by Rangers challenge

Three saves before scoring the winner
Next Item