Diego Simeone: The 'street fighter' and eternal optimist with 'a knife between his teeth'

Diego Simeone is obsessed with winning at all costs.

But Atletico Madrid's 48-year-old manager is also driven by something more profound than results at the highest level.

"En la vida, hay que creer" is his motto. In life, you have to believe.

Even with the tallest odds stacked up against him, he has always had the power to convince himself and all those around him: success is possible.

Take this story from almost three decades ago.

When a 17-year-old Simeone was called up to Argentina Under-20s for the first time, he was asked to report for training at the football association's head office in downtown Buenos Aires.

He arrived early. And waited. Five, 10, 30 minutes. Something did not add up.

The young Simeone, worried, went to buy a newspaper. He asked the seller if he had seen his team-mates.

"They've already left. At 7am!" Simeone and another young player with him, Antonio Mohamed, began to panic. It was their first call-up and they had blown it.

"We went pale, of course we immediately realised we'd got the meeting time wrong," recalls Mohamed.

"We rushed down into the metro, got off at the central station and from there had to take two buses to catch up with the team. We got the first OK, but then we realised we had run out of money.

"We got on the next bus anyway, Diego flagged it down and said to the driver: 'Take a good look at this face. One day I will be a professional footballer. I will play for Argentina. I will be a star. Remember my name, and also his. Don't forget us. We need just a small favour...'"

Mohamed remembers every detail of that motivational speech. Naturally, the driver agreed to take them for free.

But the stop where it left them was still 6km from the training ground. They had no option but to run.

Every time Mohamed wanted to give up and stop, Simeone rallied him on. There was still a chance they could make it, he would say.

When they arrived, training was over.

Soaked in sweat, they explained to under-20 manager Carlos Pachame about what had happened, how they had got there.

Pachame spoke to Argentina manager Carlos Bilardo, who was instantly charmed by the two kids' attitude. He invited them to play with the senior players, whose training session was about to start.

One week later, Bilardo took both boys to Germany as sparring partners for a team getting ready for the 1990 World Cup in Italy.

By 1991, Simeone and Mohamed were both making the starting XI themselves under new manager Alfio Basile. They were part of a generation who won the Copa America in 1991 and 1993, Argentina's two most recent major titles.

Simeone quickly became a key figure for his country, one of the best of his generation alongside fellow midfielder Fernando Redondo and prolific striker Gabriel Batistuta.

He played in three consecutive World Cups between 1994 and 2002 under three managers with three completely different football philosophies: Basile, who played 4-2-2-2; Daniel Passarella, who favoured 3-5-2; and the 3-3-1-3 of now Leeds United boss Marcelo Bielsa.

He would go on to earn more caps than the legendary Diego Maradona.

"Simeone was always a leader," says Bruno Amasino, who was his music teacher in primary and secondary school.

"Once I instructed him to take charge of the band while I played the piano. He was to give signals to the other pupils on the percussion instruments. He liked to say that he was the conductor, even if it wasn't exactly an orchestra. But Diego was exceptional at leading the group.

"'Profe, don't doubt me, I will be a footballer,' he answered. My first reaction was to tell him he would not make a living out of it. Now when I see him, I still laugh about my lack of belief."

There has never been any place for doubt in the Atletico squad. They are first believers, then footballers.

While many of Europe's top sides seek to base their success on dominating the ball, Simeone has looked elsewhere.

"Football is like hunting," he wrote in his first book El Efecto Simeone, a small edition published in Spain.

"One second can change it all, but it's not just any second, it's a flash. The prey is there and suddenly then it's not. In an instant it's over - you won't have the chance again.

"You need to know which one precise second to train for, and to understand that moment. That's something that comes with instinct, with the intelligence or experience of a player."

If a team like Barcelona might look to subdue Atletico - their prey - through superior possession, Atletico would work in resistance while waiting for that rare opportunity to transform from hunter into hunted.

It is a strategy that has paid dividends against Real Madrid, too. Before Simeone became Atletico boss in 2011, they had not beaten their city rivals in 14 years. In 28 matches since, they have won nine, drawn 10, and lost nine. They meet once again on Saturday.

True, Real beat them in two Champions League finals, in 2014 and 2016, but reaching that stage of Europe's elite club competition was unthinkable before Simeone's arrival.

And it was underdogs Atletico who triumphed in the Spanish Cup final of 2013, played at the Bernabeu, while another victory at Real's expense came in the European Super Cup in Tallinn this season.

That secured Simeone's seventh trophy in charge. When he arrived, they were closer to relegation zone than the top four.

Atletico, back then hardly seen as sleeping giants, have been transformed into major players in elite European football under his watch. Simeone has led them to two Europa League titles, one Copa del Rey, one Spanish Super Cup, one La Liga title and two European Super Cups.

"When I see this team in action, you can tell that it is Diego Simeone's team," said former Portugal and Real Madrid forward Luis Figo - who played against 'El Cholo' in La Liga - before the 2018 Europa League final in Lyon, when Atletico outclassed Marseille 3-0.

"They have his same willpower and strength."

The nickname El Cholo comes from a namesake, Carmelo Simeone. He was a right-back for Boca Juniors during the 1960s, famous for booting the ball outside the club's stadium when clearing his lines.

As a player, Simeone enjoyed unlikely success with Atletico - a taste of what was to come - winning the league and cup double in 1995-96.

He followed that with the old Uefa Cup with Inter Milan in 1998, before also winning the Italian league and cup double with Lazio in 1999-00, under ex-England boss Sven Goran-Eriksson.

But he never had it easy.

Football, as Simeone played it, was war. On the pitch, a soldier, he embodied a general. Now, as a general, he embodies the soldiers, fighting every battle from the side-lines.

Simeone played professionally for almost 20 years, from his 1987 debut with Velez until his retirement at Racing Club back in Argentina.

But really, the whole time he was also an undercover coach. Until he was forced to become a real one, that is.

In 2006, Racing were in the middle of a crisis and it seemed nobody wanted the hot seat. Enter Simeone, who traded his captain's armband for the tailored black suits he has been wearing ever since.

"It wasn't the way I had dreamed of retiring, but in the situation I felt I couldn't wait. And in football, the train comes only once. Either you get on or you miss it. And I always prefer to be on the train," Simeone said in an interview with El Grafico.

"It was the best decision I could have made. Regrets? Never."

Quick decision-making has always been a distinctive part of Simeone's personality.

It all started the day his agent locked him in Velez Sarsfield's office and asked him whether he wanted to play in Italy.

Simeone, then 19, had only a 15-minute window to answer. Yes or no. Now. Otherwise the deal with Pisa could collapse.

"There were no mobile phones or anything, so I couldn't even call my parents to hear what they thought about it," he said.

"In the end, I thought about all the pictures I'd seen in the newspapers with Argentines playing in Serie A and I accepted.

"But I didn't have a clue of where I was going. I didn't even realise that in Europe it was winter while in Argentina it was summer - so I didn't pack properly."

Simeone had made his name in the game as an 'all-fielder'. At least, that was the term former Argentina manager Carlos Bilardo coined to describe him.

He was the example of a player without borders, at home on the right, in the centre or out left, a player who attacked well, who defended better and scored a lot of headers.

He became the orchestra conductor after all. He was perhaps not the most talented player, but one with a gift for understanding what the game needed, where to find the little details to make the difference.

Once, before a match against Uruguay, Simeone put words to a style that had been familiar in South American football for decades: "To play with the knife between the teeth."

Every game was a conflict. Only the most courageous, and also the most cunning, emerged as victors.

In Simeone's mind, there is no place for good manners. You either fight to eat or are eaten.

Take the famous David Beckham red card at the 1998 World Cup in France. An energetic Simeone brought down the England midfielder and then tapped his head while he lay on the turf, igniting Beckham's reaction in front of referee Kim Milton Nielsen.

When Simeone felt the contact, he instantly exaggerated it and fell, knowing there could be an advantage to be won.

"I relate football with boxing, with a street fight," Simeone wrote in his second book, Creer (Believe), which is more a powerful self-help manifesto than a collection of football memories.

"In both cases there is always one moment, a second, in which someone shows fear in their eyes, in their body.

"In football it's exactly the same. When the opposition team sense that there is fear, they take advantage without mercy.

"Maybe the key aspect of imposing fear to the opposition is to make them understand that we have no fear." 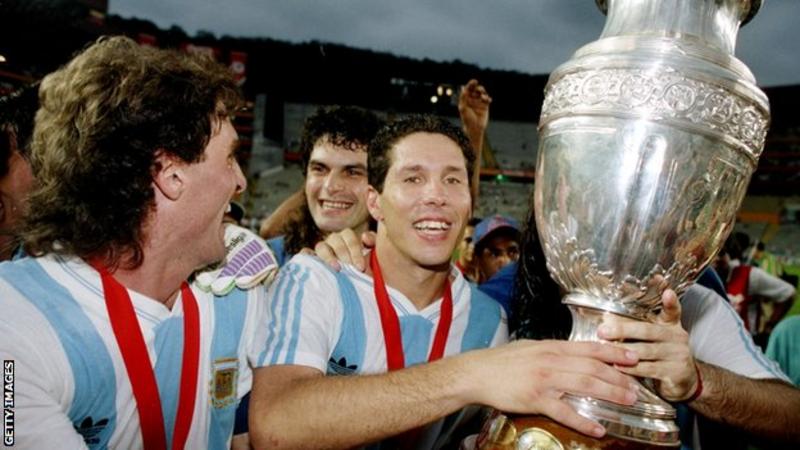 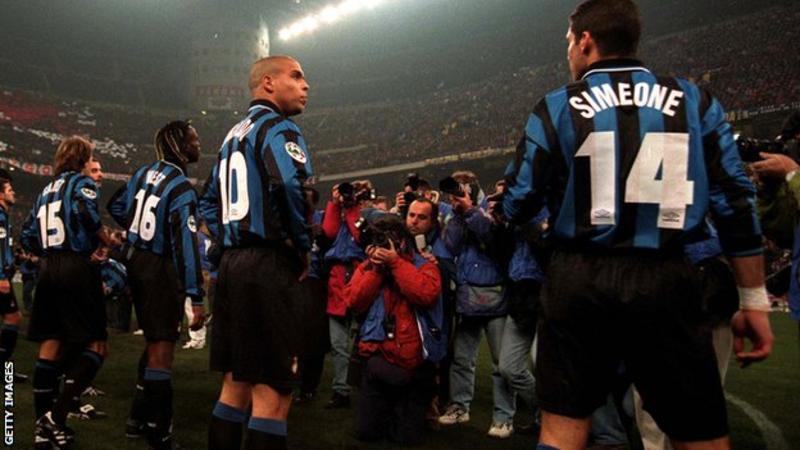 In Italy, Simeone played with Ronaldo at Inter Milan and under Sven-Goran Eriksson at Lazio 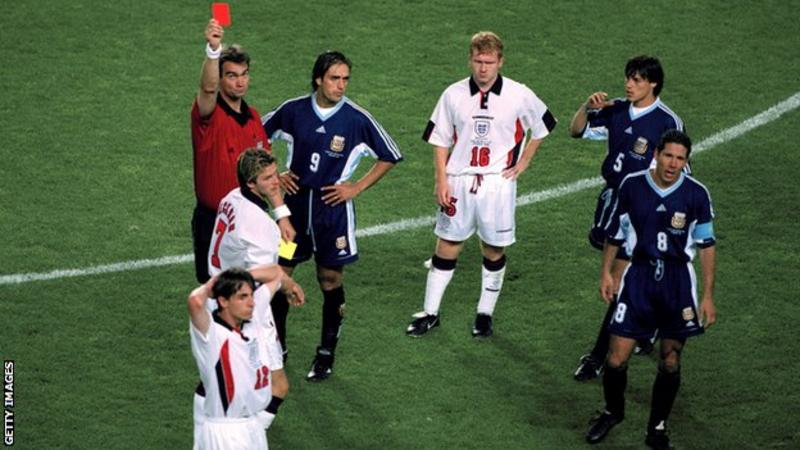 Simeone played a key role in Beckham's sending-off in the last 16 of World Cup 1998. Argentina won the match on penalties. 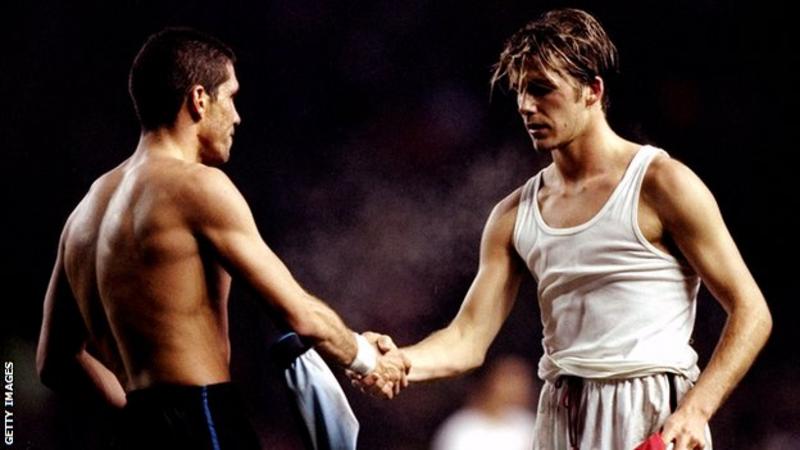 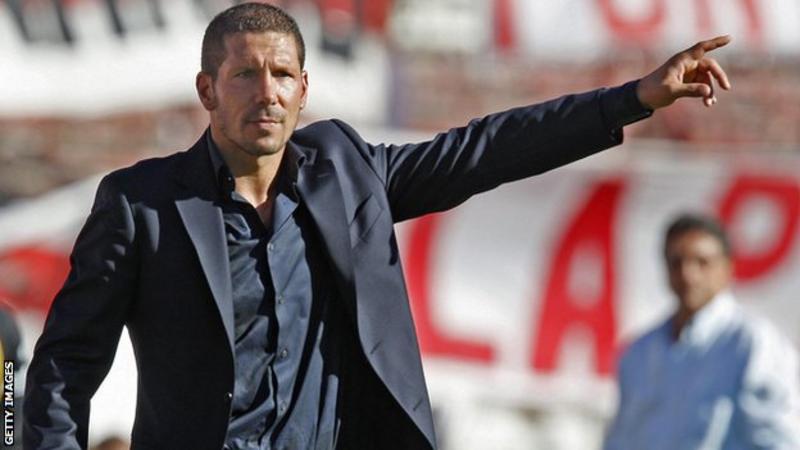 Simeone's preference for slick, smart suits dates back to the early days of his managerial career in Argentina 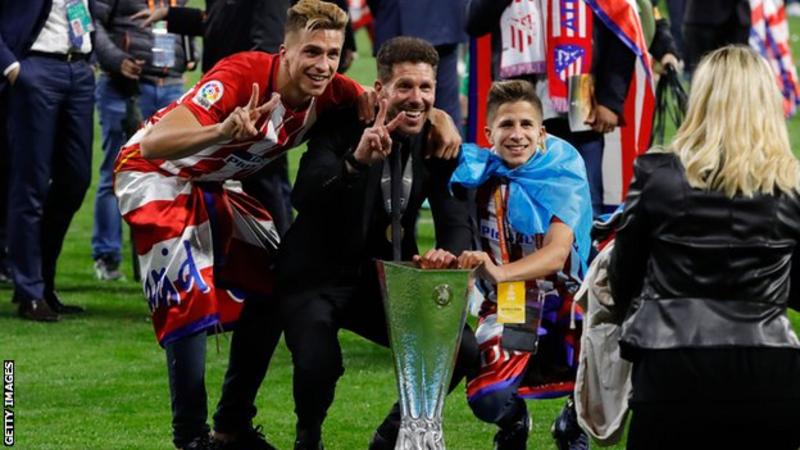 What does future hold for Barcelona captain?

'Celtic must learn to cope under pressure'

Who will win race for fourth and fifth?

Mings could have avoided me - Oliveira
Previous Item
NEXT

Naomi Ogbeta on the Edinburgh Festival,
Next Item