It's the goal that defines Ole Gunnar Solskjaer's career.

He made 366 appearances for Manchester United. He scored 126 goals. He is now the manager, given a three-year contract after an impressive three-month period as caretaker.

But think of the Norwegian and one image comes to mind: his 1999 Champions League final-winning goal in the Nou Camp for United against Bayern Munich to complete a historic Treble. "And Solskjaer has won it," goes the commentary.

Now, 20 years on, Solskjaer's side take on Barcelona on Tuesday, 1-0 down after the first leg of their Champions League quarter-final but hoping for a similar, iconic comeback.

"That goal has been mentioned a few times, yes," the 46-year-old told BBC Sport.

"So many people have congratulated me and talked to me about that night. They say 'it was the best night of my life but don't tell my wife' - that kind of thing.

"Funnily enough, I have never seen the full game. I did watch the 15 minutes that I actually played once. Of course, the goal I have probably seen a million times. I don't mind being remembered for something like that."

Solskjaer has only been back to the Nou Camp twice since 1999. He went with his youngest son, Elijah, as a paying fan to watch an El Clasico against Real Madrid, while the second visit was a spying mission to see Barcelona's 2-0 defeat of Atletico Madrid on 6 April.

However, he does not expect to be distracted by nostalgia on Tuesday.

"I will have my last little gut feeling on who to play - sometimes you do get those hunches. Against Paris St-Germain I had a team in mind when I travelled in the morning, walked out into the stadium, saw the stadium and thought: 'No, I will change.'

'If you're not the best, do not sulk' - Solskjaer's philosophy forged on the bench

Solskjaer has transformed United's season, dragging the club back into the race for a top-four Premier League finish with 10 wins from his first 11 games, then overseeing that dramatic comeback against PSG in the Champions League last 16 in March.

But an FA Cup defeat by Wolves and stuttering league form have taken some of the gloss off Solskjaer's permanent appointment, although they did beat West Ham 2-1 on Saturday at Old Trafford.

Solskjaer spoke to BBC Sport at a girls' football coaching event to promote a legends Treble reunion match on 26 May - when he will play under former boss Sir Alex Ferguson again. The Old Trafford rematch of that famous game against Bayern is in aid of the Manchester United Foundation. Most of his team-mates from 1999 will be alongside him.

"In 1999 the manager instilled this hunger and humility to work hard, to win. The culture came from him but he let the players drive it. He made us accountable for our own performances," added Solskjaer.

"It was about work-rate. It was about coming in on time. It was about doing all the extras that can give you those little percentages that win you games. They are the things that are easy to do, but also very easy not to do. Do we go all in, or don't we?

"If you want to play at Manchester United you have to have a personality. You have to be able to stand up for yourself against big boys. We were going to play against top players in the world. You can't look round and always ask for help." 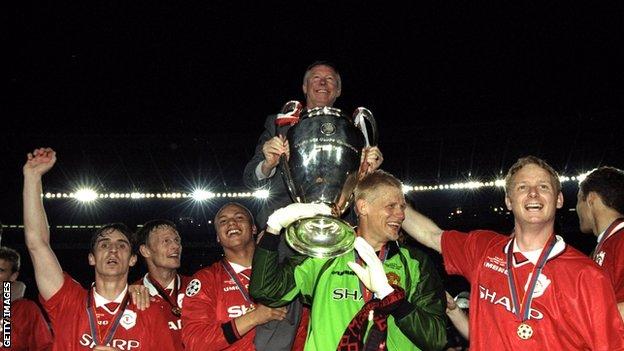 In that 1999 Champions League final, Solskjaer was brought on for Andy Cole in the 81st minute with United 1-0 down, having trailed to Mario Basler's free-kick since the sixth minute.

They were still behind into injury-time when Teddy Sheringham equalised. Extra time seemingly loomed only for Solskjaer to stick out his right boot from Sheringham's flick-on for one of football's most iconic moments.

"I wasn't happy to be on the bench," Solskjaer says, offering an insight into his managerial philosophy.

"If you are not one of the best players, you have to be selfless.

"Ronaldo plays. Messi plays. They are the best players.

"You don't live off talent any more because there are so many good players around. Football is improving. Athleticism, pace, everything. If you want to win, you have to have the best mentality as well.

"It is about creating an environment of world-class, elite performance. We cannot accept mediocrity."

If Solskjaer has one regret from the Nou Camp in 1999 it is that he did an immediate post-match television interview and missed the start of the celebrations.

For this charity rematch, he wonders if his regret will be agreeing to play at all.

"I am nowhere near fit," he laughs. "The last time I tried it both my calves went bang.

"I am looking forward to it, and it will be great to see everyone again - but I am dreading it as well."

Communique of AIPS-Africa at its 6th Congress
Next Item