But, just as much as Dwight Gayle's red card proved crucial at Villa Park, so did the 80th-minute sending-off of Albion captain Chris Brunt as they finished with 10 men for the second time in four days.

They held on for penalties and, although Albert Adomah's miss in the shootout briefly gave them hope after Steer had saved from Mason Holgate and Ahmed Hegazi, Abraham kept his nerve to book a play-off final meeting with either Leeds or Derby at Wembley on 27 May.

They meet in the second leg of their semi-final at Elland Road on Wednesday, with Leeds 1-0 up from the first leg.

The main sub-plot of a tight two-legged play-off semi-final concerned Albion's two red cards, with top scorer Gayle sent off on Saturday and captain Brunt dismissed at The Hawthorns.

If the Baggies were a bit unlucky at Villa Park over the controversial Gayle incident, this time there was no doubt at all.

Brunt stepped on John McGinn's arm in their first tangle before the break, but referee Chris Kavanagh either did not see the incident or deemed it accidental. 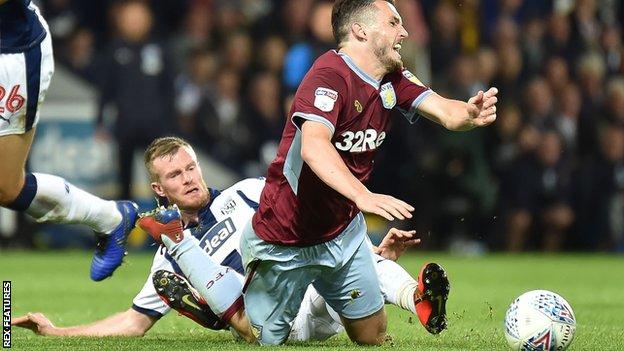 Brunt was then booked early in the second half for a late challenge on McGinn, which could easily have been interpreted as a sending-off offence in its own right.

When he brought McGinn down again on the edge of the box, Brunt's resulting red card was inevitable.

It might have been a different story if Albion had stayed with 11 men, given what a force they had been when roared on from even before kick-off by their raucous home support.

They had already looked a threat before they finally took the lead after 29 minutes, not surprisingly from an aerial set-piece.

Albion won a throw close to the corner flag and, when Holgate hurled in a long one to the near post, it did not immediately seem that dangerous, but Dawson got in first - as he has done so often in such set-piece situations during his career - and steered in a flicked header which crept in at the far post.

Albion had other chances too - Tyrone Mings blocked a Jacob Murphy shot on his own goal line, Jay Rodriguez sent a powerful effort straight at keeper Steer, Matt Phillips powered a close-range header just over and Brunt shot just wide from long range.

But, although it took a fierce low shot from Anwar El Ghazi to test Sam Johnstone properly for the first time after the break, Villa were already starting to turn the tide before Brunt's departure.

And, once they had a man advantage, they were hard to hold back.

Adomah had a left-footed shot from 12 yards superbly saved by former Villa keeper Johnstone, while Conor Hourihane had an effort deflected over and then Adomah fired just wide.

Two tired sides then got through extra time as Villa still failed to break down the door before the drama of spot-kicks.

And in Steer, Villa's third-choice goalkeeper at the start of the season, Dean Smith's side had just the man for the occasion.

Smith - who left Brentford to succeed Steve Bruce as Villa boss in October - has guided Villa back to Wembley for the second time in 12 months.

Having experienced the disappointment of play-off final defeat by Fulham in last season's play-off final, they will get another opportunity to return to the Premier League following relegation in 2016.

As for the Baggies, they have ultimately failed in their bid to bounce straight back to the top flight after one year in the Championship and are likely to start next season with a new boss.

How the penalties unfolded 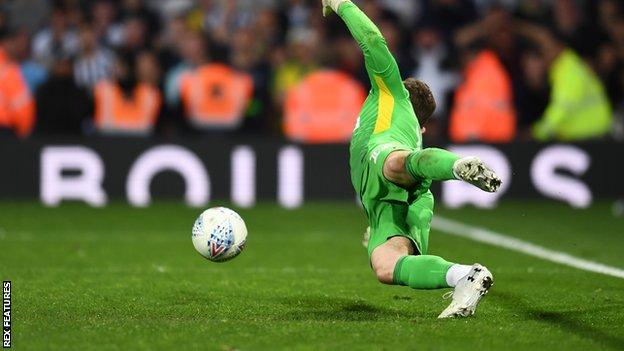 'We prepared for penalties'

"I'd have taken this 15 games ago and we have cause to be very proud.

"We deserved it, but the disappointing for me was not winning. I couldn't believe we'd lost the game. That's our first defeat since losing at Brentford in February.

"They were always going to be threat from set-pieces but we had enough chances to have scored ourselves.

"We'd done our preparations though. We had prepared for penalties since the day we qualified for the play-offs. We had a lot of rehearsals and of course we had the inspired substitution of bringing on Mile Jedinak, who has never missed a penalty."

"We've been on the end of some unjust decisions over the course of the two ties but you just have to accept it.

"The momentum was with us. But for the lads to go down to 10 men again and perform they did was a credit to them.

"Their work ethic has been excellent since from the moment I took over and we can be proud of the effort that has been put in.

"The fans were magnificent too. They can be proud of the way they got behind their team. The atmosphere was electric."

Shan gets assurances over West Brom future
Next Item