Mr Ahmad has been the president of Caf since March 2017

Confederation of African Football (Caf) president Ahmad is coming under growing pressure as Fifa investigates allegations against him.

Separately, an investigation by the BBC can reveal that Mr Ahmad received two sets of expenses, claiming to be in two different countries, for the same nine-day period during the 2018 World Cup.

According to documents seen by the BBC, the Fifa vice-president twice claimed for payments from African football's ruling body, Caf, for work carried out between 23 June and 1 July.

First, the documents indicate he signed for daily allowances that stated that he was in Egypt for this spell - before later adding his signature to a document claiming he was in Russia at the same time.

As a vice-president of football's world governing body, Mr Ahmad should have been paid his daily World Cup allowance of $450 by Fifa since they organise the tournament - meaning he may have received three sets of payments for the nine-day spell in question.

Caf, whose headquarters are in the Egyptian capital Cairo, has no role in organising the event.

"President Ahmad took [sic] contact with the Fifa administration to support him in its action for Caf's reforms and to get the process more transparent," Caf replied to BBC Sport in a statement.

"The details of this cooperation will be announced very soon. For now, as the President have [sic] a very deep respect of the institutions, he keeps his answers for Fifa's teams, which will lead the future audit."

In June, Fifa and Caf announced that the former will install its own Secretary General to oversee administrative reform in the governance of African football's ruling body from 1 August.

The decision to appoint Senegalese Fatma Samoura as a General Delegate to Caf is unprecedented in the 115-year history of Fifa, which has never had recourse before to help guide the administration of a confederation.

Mr Ahmad, who took charge of African football in March 2017, is currently being investigated by both Fifa's Ethics Committee itself and by French anti-corruption authorities - with an unusual kit deal involving a French gym equipment supplier among the lines of inquiry.

The 59-year-old from Madagascar, whose organisation is currently hosting the Africa Cup of Nations in Egypt, has strenuously denied any wrongdoing in previous statements.

In early June 2018, Mr Ahmad travelled to Moscow to attend both the Fifa Congress on 13 June and the World Cup, which ran between 14 June and 11 July.

Documents seen by the BBC indicate that Mr Ahmad flew from Russia to Egypt on 23 June for a four-day stay before heading back to Moscow after a trip home to Madagascar between 27 June and 1 July.

Nonetheless, the documents suggest that, on 28 September last year, Mr Ahmad collected $18,450 from Caf for a 41-day stay in Russia between 7 June and 17 July.

His signature can be seen at the bottom of a page detailing the expenses, which came under the heading 'Mission: World Cup Russia 2018.' 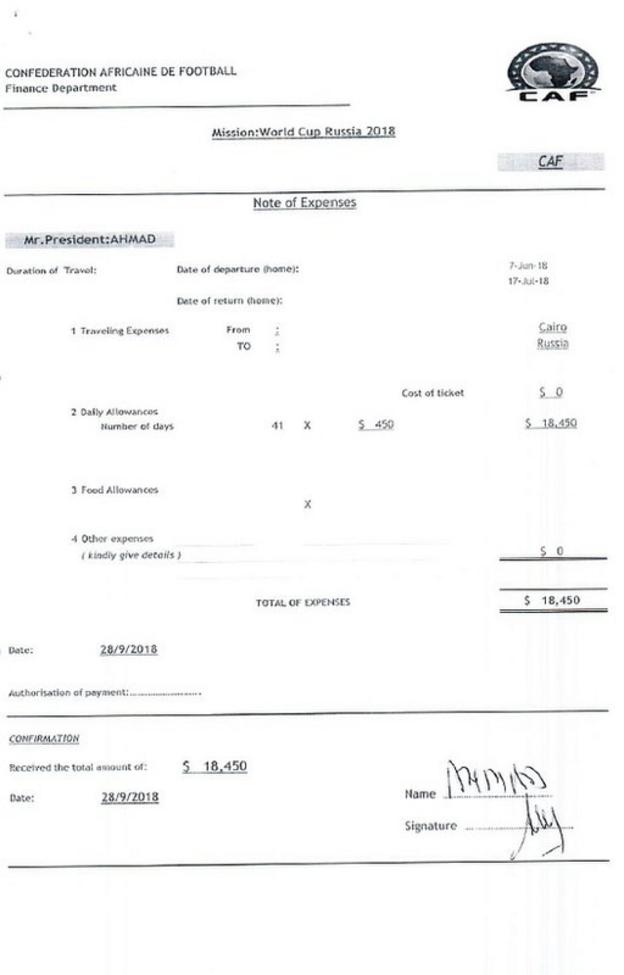 The receipt for Ahmad's June trip to Russia, as paid by Caf

Three weeks earlier, on 9 September, Mr Ahmad had collected $4,050 from Caf for a nine-day period between 23 June and 1 July, which came under the heading 'Visit to Caf Bureau'.

Mr Ahmad left Moscow on 23 June to fly back to Caf headquarters in Egypt, landing the following day. 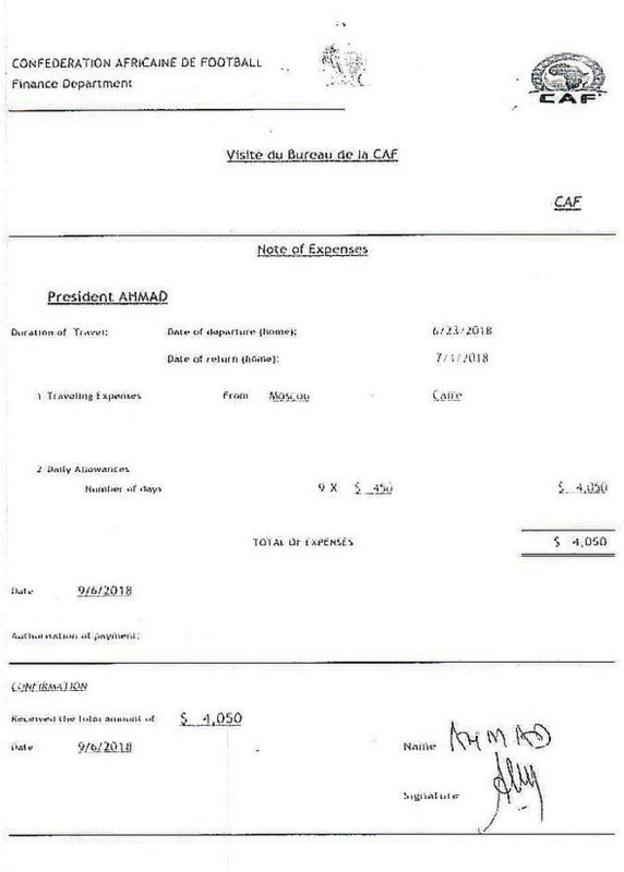 The receipt for Ahmad's June 2018 trip to Cairo, as paid by Caf

The BBC understands Mr Ahmad may have been in neither Egypt nor Russia for the period 27 June to 1 July but in Madagascar, as documents suggest he intended to travel home at that time.

The BBC specifically asked Mr Ahmad and Caf if it could confirm that he was in the island nation at the time but received no response in the statement it was given.

BBC Sport also sought comment from Fifa to ask if it paid Mr Ahmad for the same 41-day period, as per convention, but has also yet to receive any response.

Nor did Fifa answer a question about whether it paid Mr Ahmad for work undertaken on behalf of Fifa in Qatar between 23-25 October 2018.

Despite travelling to the host nation of the next World Cup on behalf of Fifa - with these expenses labelled 'Mission FIFA - Qatar' on a Caf document - it appears that Mr Ahmad claimed expenses, amounting to $1,350 from the African football body once again.

Mr Ahmad also failed to respond to the question in his statement despite being specifically asked by the BBC.

Shortly after taking charge of Caf in March 2017, Mr Ahmad told the BBC that he would not be taking a salary from Caf "for the simple reason it doesn't respect good administration".

"The salaries of all Caf employees, from administrators to the executive committee and president, all have to be transparent," he said in May 2017.

While this figure may have been determined by Executive Committee members without his input, Mr Ahmad did not reject the salary nor make it public.

Once again, no response was given when a question on this specific topic was put to both Mr Ahmad and Caf. 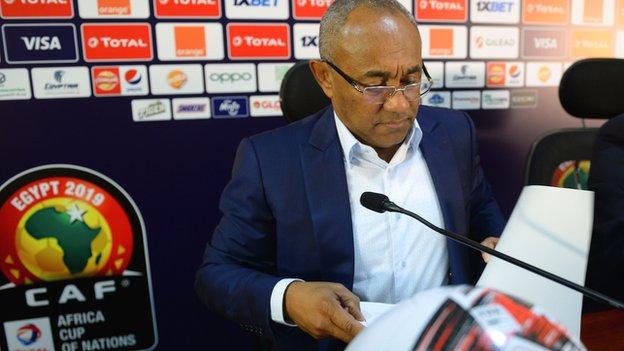 Ironically, the man whom Mr Ahmad displaced - Issa Hayatou - had gone without a salary for most of his 29-year reign.

The Cameroonian, who ruled Caf with an iron fist, took charge in 1988 but only accepted a salary, equivalent to $30,000 per month, in July 2016 - just eight months before the end of his decades-long rule.

He had however received a 'representational payment', which had grown to $90,000 per year by the time he left office.

Mr Ahmad, who took charge of Caf in March 2017, has two years left of his four-year term.

Boateng joins Serie B side Monza

Man Utd in talks with Porto over Telles

Can anyone live with 'irresistible' Liverpool

'Sharing trophy should be considered'
Previous Item
NEXT

Nigeria coach in no hurry to decide future
Next Item