British sprinter James Ellington is determined to make his comeback from a motorbike accident this weekend despite suffering a reaction to a bee sting.

The double Olympian is racing in the 100m at the Anniversary Games in London - but has yet to sprint more than 60m since the crash in January 21017.

But he says the sting had left him "in the most pain" since the accident.

He announced his return to the track on Monday but a day later was stung on the finger, with the reaction causing pain throughout his body.

"I woke up on Wednesday morning and felt like I had flu," he told BBC Sport.

"All the nerves in my pelvis are sensitive anyway, but suddenly my pelvis was killing me.

"I'm a few days out from returning to the track and I'm in the most pain I've been in since the accident.

"But this is just a test on top of a test. It is my own challenge.

"I know that I haven't sprinted over 60 metres, but I'm confident that on Saturday I'll be able to get through a decent race. I can't let a bit of pain stop me." 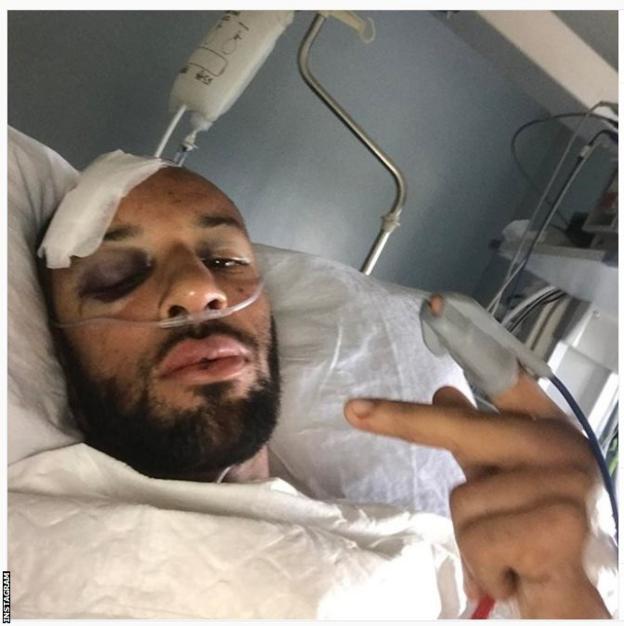 Ellington hasn't competed in almost three years and takes up to six days to recover after sprint training.

"It's just a race at the end of the day - what's the worst that can happen? I've survived a crash on a motorbike," he said.

"I'm physically vulnerable, but my body is slowly adapting and the window for how long it takes me to recover is slowly closing."

His rehabilitation has involved learning to walk again, then to jog and, slowly, to run faster.

"I was happy to be alive. There have been bad weeks where I physically couldn't move," he said.

"But it didn't cross my mind that I wouldn't compete again. It wasn't if, it was when."

The Briton has now set his sights on the Tokyo 2020 Olympics, saying he will "make the team for sure".

"If I get to the Olympics, there's no reason why I can't make the final and challenge for a medal," he added.

"I don't want to curse it - but with no Bolt, I reckon 9.9 seconds will get you a medal at the Olympics."

Shape up or get out

Okoye set for discus return in London
Next Item