Gerrard says the atmosphere will "change full circle" in Glasgow next Thursday as they attempt to reach the group stage in consecutive seasons.

"The crowd need to be with us from the start because this game won't be dead because of the away goal," he said.

"Hopefully that support can help get us over the line."

Rangers dominated the ball for large spells in Poland and created good opportunities to grab an away goal, Alfredo Morelos missing the best of them when clean through after the break.

But Legia came to life in the second half and threatened on several occasions.

Gerrard, who has only lost twice in 21 matches in the Europa League since taking charge at Ibrox, was pleased with the display in Warsaw but wants to see a greater threat from his side next week.

"I'd like to see us be a bit more brave and a bit more positive in the final third - but I'm sure that'll come," he told Rangers TV.

"I hope and expect we can score the goals to get us through. But because we haven't scored an away goal we need to defend really well as well." 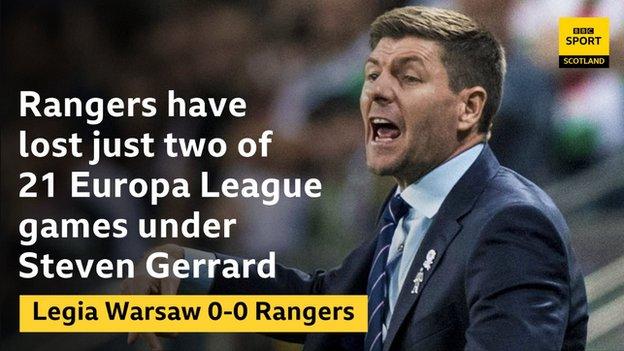 'The Poles aren't out of it' - analysis

Legia pride themselves on clean sheets so if they can do that and counter-attack Rangers and get an away goal at Ibrox, then there could be problems. I don't see it myself, as Rangers have better players and are a better team. But the Poles aren't out of it.

Is Konsa the man to replace Van Dijk?

Vinicius can play with Kane - Mourinho