England captain Owen Farrell has changed his tackling technique to get on the right side of World Rugby's clampdown on dangerous play at the World Cup, which starts on Friday.

On two occasions in autumn 2018 Farrell escaped punishment for what appeared to be no-arms tackles.

"But he has made some adjustments based on last autumn."

Mitchell added: "John Carrington, our strength and conditioning coach, is also my support on defence and he's very good at working on tackle technique.

"There can be mitigating circumstances, but if your hands are in front of your shoulder you've got a better chance of making a proper wrap tackle.

"If your shoulder is ahead of your hands, then the law doesn't look after you very well."

World Rugby is trying to rid the game of contact to the head and issued new directives at the end of last season about what constitutes a legitimate tackle.

At the recent World Under-20 Championship in Argentina there were 13 players sent to the sin bin and four dismissed, and England coach Eddie Jones is worried there might be a flurry of cards in the early weeks of the tournament in Japan. 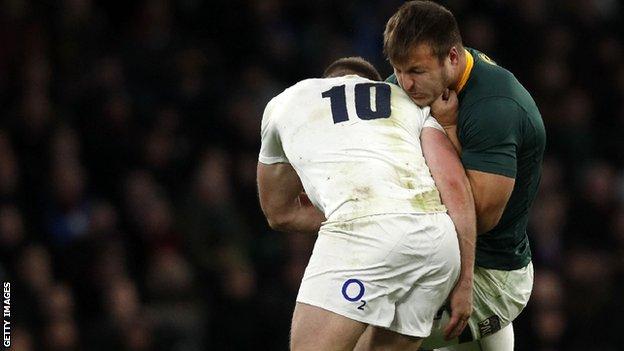 "It's at the back of everyone's mind and there is some apprehension around it," confirmed Mitchell.

"You are just going to have to deal with whatever happens.

"You would like to think that since then [the World Junior Championship] there has been learning, as little bit more common sense, and you do hear the words 'mitigating circumstances'."

England are in Pool C in Japan and begin their campaign against Tonga in Sapporo on 22 September.