Slade is fit to start if selected against Tonga in the Sapporo Dome on Sunday, with coach Eddie Jones due to announce his team on Friday.

"Manu is so good to play with - the way we can use him to get is over the gain-line or to run decoy lines is a massive weapon," Slade said.

"It gives me a lot of time to play out of the back of that and elsewhere."

He added: "We have very different strengths and really different weaknesses, and I think we complement each other and cover up each other's weaknesses."

Jones used Slade and Tuilagi together throughout the Six Nations outside Owen Farrell at fly-half, having earlier in his regime preferred to use George Ford at 10 and Farrell at inside-centre.

And Slade says his on-field understanding with the 28-year-old Tuilagi has been boosted by how much the two enjoy each other's company off the pitch.

He told BBC Radio 5 Live: "We've always got on really well ever since we've known each other.

"We were in camps together for a few years but never really regularly - he was always fit when I was injured or I was fit and he was injured.

"I feel like I get on really well with him, and that bond off the pitch does play a big role on it.

"It can take time learning to play with each other, but he and I have managed to pick it up pretty quick.

"Manu's in very good shape. He's got through the whole of this pre-season, which has been tough, a real grind, but very good.

"He looks like he's hungry to do well. I'm excited to see what he does." 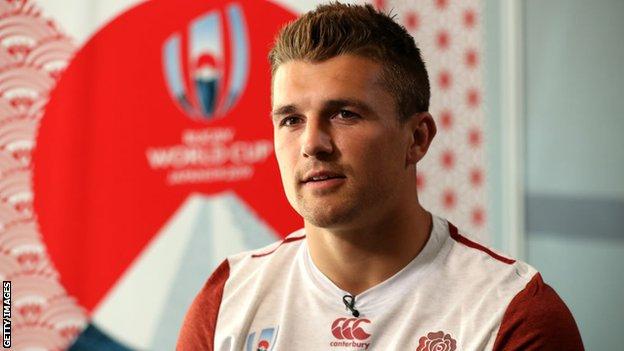 England travelled north from sub-tropical Miyazaki to Sapporo in the far north on Wednesday, conditions in the far north 12 degrees cooler than they had been on the southern island of Kyushu, the wet, fresh weather on arrival much more reminiscent of autumn back home.

While Mako Vunipola and Jack Nowell continue to be on track for a return from injury later in the group stage, short-term injury doubts back-row forward Mark Wilson and winger Joe Cokanasiga have returned to fuller training.

Coach Eddie Jones has so far kept the players in the dark about his selection plans for Sunday, the short turnaround before England's second match against the USA suggesting he will look at all his options before the stiffer tests of Argentina and France.

Slade said: "You can never really tell with Eddie. We like to try different combinations in training, and we have so many talented players, especially in midfield.

"What's good about our midfield options is that everyone's got different strengths, so whatever the coaches want to go with, they've got an option to pick.

Slade was a regular alongside Tuilagi during England's Six Nations campaign earlier this year, scoring his third international try in the 32-20 win over Ireland in Dublin.

He touched down again against France a week later, that burgeoning centre partnership one of the highlights for England in a campaign that then decelerated with defeat by Wales in Cardiff and that extraordinary draw against Scotland.

A knee injury kept the 26-year-old out of all four of England's warm-up matches for this World Cup, but after training solidly since arriving in Japan he is ready to reignite that explosive midfield combination.

He said: "The knee's good - I've had a few weeks now to rehab it and get it better.

"I'm feeling more and more confident every day, and hopefully I get the chance to test it out at the weekend.

"Initially I was worried. You don't know what it could be until you get your scan results back. It could have been a lot worse, so it was a massive relief."

Four years ago Slade was a last-minute bolter for Stuart Lancaster's squad, impressing in the final pre-tournament warm-up against France but then left out of match-day action until the final group game against Uruguay, when England had already gone out.

"Last World Cup I was just over the moon to be selected," he said.

"I had no expectations going into that camp, whereas this time I've had quite a lot of quality game-time, and feel a real part of the squad.

"I've had a massive drive from the last World Cup to wanting to play a much bigger role in this one.

"I feel like the last Six Nations was a real step in the right direction for me. I was very frustrated before that, maybe not having played as well as I could have for England.

"Hopefully if I get the chance I can keep improving on that."

'The closer we get, the more I fancy England'
Previous Item
NEXT