Calciopoli: The Italian football scandal that 'erupted like a volcano' and left Juventus in Serie B

Juventus played Rimini in their first Serie B game. Players such as Pavel Nedved and Giorgio Chiellini appearing in the second division became a familiar sight for supporters during the course of the 2006-07 season.

Juventus played Rimini in their first Serie B game. Players such as Pavel Nedved and Giorgio Chiellini appearing in the second division became a familiar sight for supporters during the course of the 2006-07 season.

Tucked away in north-west Italy in September 2006, Italy greats Gianluigi Buffon and Alessandro del Piero step out in front of 10,000 fans for the opening league game of the season.

Juventus are embarking on their first campaign in Serie B, Italy's second tier, and the 1-1 draw against minnows Rimini was another low point in a scandal that shook European football.

"That humiliation quickly became anger and we had the desire to show we were stronger than what had happened to us," Juve season ticket-holder Maurizio Giovannelli tells BBC Sport.

"It ultimately gave us the power to build a fantastic winning era which is not yet finished today, to be playing in Champions League finals and become, once again, one of the top five teams in the world.

"The main driving factor for this amazing winning cycle is definitely that sense of humiliation we felt going down to Serie B."

Part of that humiliation was having two first-place finishes stripped from them - including the 2006 Serie A title, which was handed to Inter Milan, the team they face on Sunday. This week, Juventus made another appeal to have that trophy taken away from the Nerazzurri.

So, how did the 35-time Italian and two-time European champions end up being relegated 13 years ago?

Alongside AC Milan, Fiorentina and Lazio, Juventus were one of the biggest clubs in Italian football to face allegations.

In scenes which would not look out of place in a gangster movie, transcripts from phone taps were revealed.

At one end of the line were key figures in Italian football, at the other were refereeing officials. They were allegedly being pressured to favour certain clubs, with the claims only uncovered by chance as prosecutors investigated claims of doping at Juve. 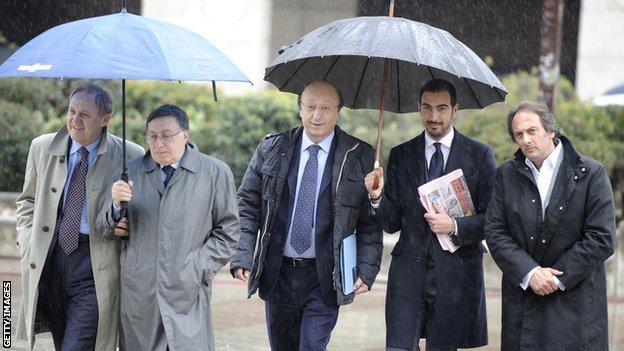 Juve general manager Luciano Moggi was at the centre of the scandal, though he has always denied any wrongdoing. He, Italian football federation (FIGC) president Franco Carraro and vice-president Innocenzo Mazzini ended up resigning from their roles.

"The story was like the eruption of a volcano," Roberto Beccantini, who worked as a correspondent for La Stampa newspaper in Italy during the scandal, tells BBC Sport.

"Juventus is a club that divides Italy more than any other, and one that always had power with the Agnellis as owners.

"And do not forget that 2006 was the year of the World Cup in Germany. Many of the politicians, journalists and showmen decided to cheer against our national team."

The Azzurri made light of the troubles and went all the way that summer, lifting the World Cup for the fourth time.

The story of Moggi and Juventus chairman Antonio Giraudo being investigated by prosecutors is quite remarkable.

They had allegedly detained referee Gianluca Paparesta and his two assistants in a changing room after Juve's 2-1 loss at Reggina in November 2004, and were said to have berated the officials for not favouring Juve during the game. They deny this was the case.

Italian newspapers also printed wiretaps of Moggi allegedly attempting to put pressure on the vice-chairman of Uefa's referees' commission and of calls made to government minister Giuseppe Pisanu. 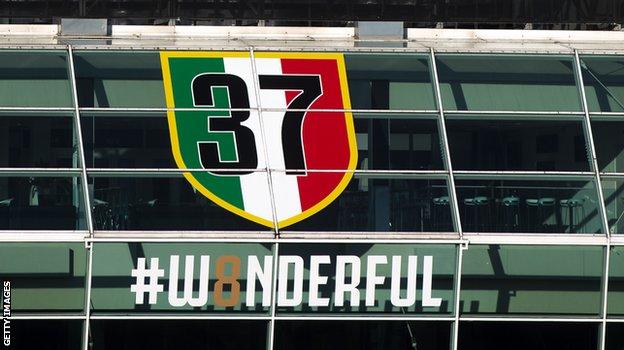 Last season's title was Juventus' eighth in a row. Though they have officially won 35 top-flight titles, the display on their stadium includes the two stripped from them because of Calciopoli.

"The shock at the time is easy to imagine. Half the country was happy that Juventus had been punished, while the other half - the Juventina - was angry and spoke of conspiracy.

"Even though we have had scandals like doping, false passports and betting, I think this is the biggest sporting scandal the country has seen."

For his part, Moggi was handed a life ban from Italian football.

While Buffon, Del Piero, Giorgio Chiellini, Pavel Nedved and David Trezeguet - all international stars and among the best of their era - decided to stay with Juve in the second division, a number of big-name players were picked off by Europe's elite clubs.

Zlatan Ibrahimovic and Patrick Vieira joined rivals Inter Milan for a combined £23m, Fabio Cannavaro and Emerson went to Real Madrid for a total of £13.7m, Lilian Thuram and Gianluca Zambrotta joined Barcelona for £13m, while Adrian Mutu went to Fiorentina for £5.5m.

Despite starting bottom of the table on minus nine points, Juve lost just four of their 42 matches all season, climbing to the top to become champions and return to Serie A at the first attempt. 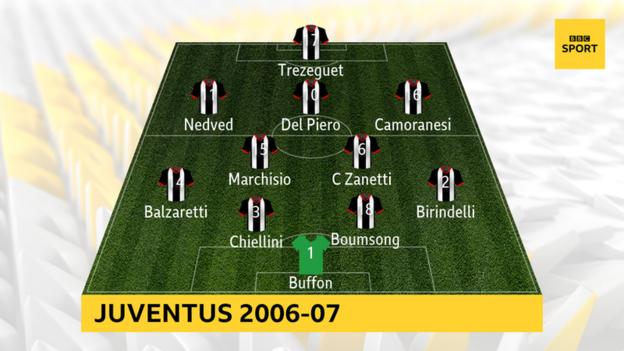 This would have been Juventus' strongest XI in their Serie B campaign. Boss Didier Deschamps could also call on the likes of Jonathan Zebina, Valeri Bojinov, Robert Kovac and Nicola Legrottaglie.

They will play table-topping Inter Milan on Sunday (19:45 BST) in a match with an intriguing backdrop after Juve's decision this week to make a new pitch to the Italian Olympic Committee's Collegio di Garanzia dello Sport tribunal to strip Inter of the 2005-06 title.

Giovannelli says Inter were awarded the "cardboard Scudetto" and that they were "never punished" for claims made against them in later years. They deny any wrongdoing.

Beccantini adds: "The rivalry between the two is very tough and runs very deep. Inter didn't deserve the Scudetto of 2006.

"This did not necessarily mean guilt but it would have been enough to avoid the awarding of the championship to Inter.

"Juventus does not ask for the Scudetto of Calciopoli to be returned. They only ask for it to be removed from Inter, who do not deserve it."

King shortchanged me in Rigondeaux fight