Scotland set up a World Cup showdown with Japan with a comfortable bonus-point win over Russia in Shizuoka.

Adam Hastings got a second string side rolling with two early tries and George Horne was gifted an intercept score.

Horne completed a hat-trick after the interval, while George Turner, Tommy Seymour, John Barclay and Stuart McInally also got in on the act.

Now the Scots must take four more points from Sunday's Pool A finale than the hosts to reach the quarter finals.

Russia end their World Cup adventure with four defeats and a tired-looking team seldom troubled a Scottish defence that kept the opposition scoreless for the second win in a row.

Scotland had steeled themselves for a brutal battle, a pursuit of five points that they expected would be long and hard, as it had been for Japan and Ireland when they played the Bears. It was nothing of the sort. This was a clinical hit on a proud but out-classed and over-powered team.

As a preparation for the big one against Japan - Typhoon Hagibis permitting - it was just about perfect. As they did against Samoa in their last game, Scotland married power and creativity. As a team, they can put pressure on themselves by trying to play too much rugby too soon in games but they had control from the get-go here, albeit against opponents who had to be scraped off the floor at the end such was their exhaustion.

George Horne will be love-bombed in its wake - and no wonder. The scrum-half was a riot of movement and tries. His scoring record for club and country is astonishing, his tries to minutes played stats up there with the very best. His hat-trick was quite something, but Horne was surrounded by players who hit their stride.

They were sent on their way by Hastings, who played wonderfully not just in getting two tries - he was one narrow forward pass away from getting three - but also with his game management and deadeye goal-kicking.

A simple move off the back of a scrum and the fly-half went through a gap to score. Hastings got a second five minutes later after Pete Horne's tackle on German Davydov forced a turnover which Hastings made the most of. He chipped ahead, brushed off big Tagir Gadzhiev and then got monstrously lucky when the covering Vasily Artemyev misjudged the bounce of the ball in his in-goal area.

Hastings had the simplest job in touching down. With a 14-0 lead inside 18 minutes this was an explosive beginning. No panic, no hint of a difficult night.

A third went in just after the 20-minute mark and it was the first of Horne's three. A cheeky one, too. Hastings put Scotland deep inside Russia's 22. The underdogs had a line-out but made a hash of their exit, Dimitry Perov, the scrum-half, having his pass plucked out of the air by his opposite number. 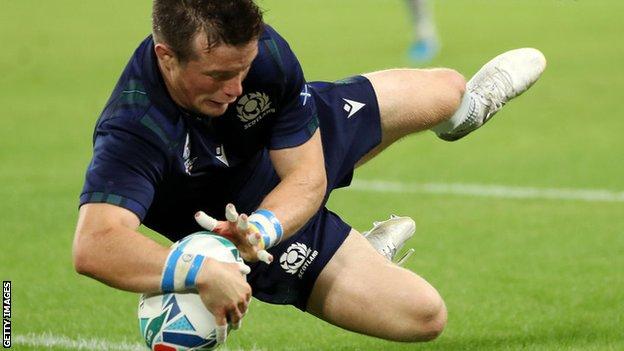 A third conversion went over and it was 21-0. Russia were fortunate not to ship a fourth just before the break, but no matter. It came just after instead. Horne got it, but it was really all about Darcy Graham, that whirling dervish of a winger. Russia kicked loosely to Graham - a very bad idea - and the wing scampered downfield, evading one opponent and then another. It was a brilliant break from Graham who could have finished it off himself but kindly presented it to Horne. Hastings banged over a fourth conversion and Scotland had what they came here for.

They got a whole lot more before the end. Turner broke free from a line-out maul and ran in a fifth, Seymour finished excellently from Blair Kinghorn's chip through and Horne got his hat-trick before an hour had been played. His big brother had a hand in it. Henry Pyrgos, too.

Pyrgos had come on for Graham early in the second half, the wing being given a rest before the Japan game. Two more tries came and it could have been four. Horne looked to have got his own fourth but referee Wayne Barnes ruled it out for a forward pass from Magnus Bradbury.

Scotland struck again, though, when Barclay ran free and strolled around a static Davydov. McInally got the ninth two minutes from time after terrific work from Kinghorn. There would have been a tenth - and a third for Hastings - but the officials saw another forward pass and the man-of-the-match was denied his moment.

Not that he would been all that bothered. This was as resounding as Scotland had hoped for in their dreams. All eyes now turn to the potential epic against Japan at the weekend. Scotland will go into it in good heart.

What do Scotland need to reach the last eight?

Morocco’s Referees Whistle to the Bank

'Timing all wrong' with Budge plan

No Addison regrets over fitness gamble