"You get a rush when you do something dangerous and pull it off," admits livewire British BMX rider Charlotte Worthington. "That buzz, it's addictive!"

The Olympics are changing, with new 'urban' sports like freestyle BMX - as well as skateboarding and 3v3 basketball - being introduced to future Games, beginning with Tokyo 2020.

"Riders push themselves to the limit, take massive risks and pull off tricks you just don't think could be possible, so people are going to love watching it," she adds.

Last month Worthington became the sport's first ever European champion and as such the 23-year-old former chef arguably represents one of GB's best Olympic medal hopes in the new 'youthful' sports.

First though, Worthington must qualify and she can take a considerable step towards achieving that target at the World Championships in China this week.

'People at school thought I was weird'

Worthington received a scooter for Christmas in 2009 when she was 13 and became hooked, before moving on to BMX, although few of her peers appreciated her passion.

"People at high school would call me stupid names like 'Scoots McGee' and people just didn't 'get me'," recalls Worthington. "They thought I was weird.

"I suppose everyone in this sport is a little different, but I loved being at the skate park where there were other kids like me who lived for that adrenaline rush, pushed their limits, had fun and liked getting hot and sweaty.

"I'm definitely not a 'girly-girl'," adds the rider while laughing.

'I was a chef and had no time to ride'

After leaving college, Worthington's father found her a job working in a Mexican restaurant close to the family home in Chorlton, south Manchester.

"I started as a glass collector, then I was a food runner and when people began talking to me and realising I was a bit of a tomboy they thought I'd do well in the kitchen," says Worthington, who believes she created "quite a reputation" with her speciality pies.

"I had some pretty fun times and although it was never meant to be permanent I was working as a cook in various restaurants for about three years.

"I was sweating it out in the kitchen for over 40 hours a week and barely had any time or energy to ride, but then the sport went into the Olympics and last year I was picked up by British Cycling." 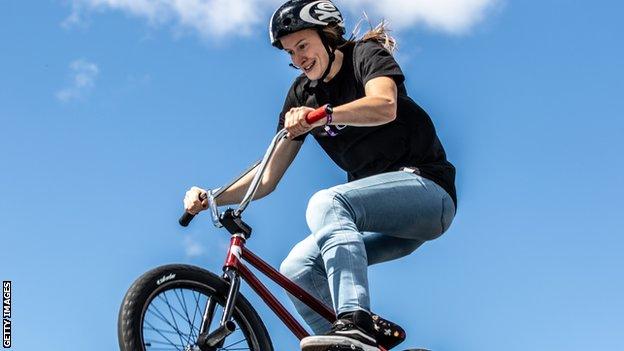 Less than two years on, Worthington has now relocated to the Midlands and trains full-time at 'Adrenaline Alley' in Corby, which is regarded as one of the best skate parks in Europe.

"My lifestyle before this was not the lifestyle of an elite athlete," she admits.

"After being a chef for three years I was on minimal sleep, poor diet and never working out, then I had a wake-up call with a bad result in France last year.

"British Cycling know how to make champions and I realised I needed to buckle down, make changes, get more sleep, improve my diet and hit the gym."

'The Olympics has changed the sport'

The addition of 'freestyle' sports into the Olympic movement has not always been a universally popular move.

Many freestyle skiers and snowboarders raised concerns before boardercross, halfpipe, slopestyle and big air events were added to the Winter Olympics.

High profile climbers and skateboarders are also worried that new competitive regulations, introduced before the sports' Olympic debuts, could damage the 'free' nature and tradition of their events.

The BMX community is also split, but Worthington insists she has witnessed the positives first hand.

"I've only been competing in the female BMX freestyle events for two years, but in that time there's more than double the numbers competing and the standard has increased massively too," she tells BBC Sport.

"So many people will see the sport through the Olympics and it's going to bring in a whole new generation of riders who are inspired by people performing unimaginable tricks.

"The sport may be divided in terms of who's into the Olympics and those who think it isn't good, but ultimately I don't see the negatives."

With British and European titles already secured in 2019, Worthington is well placed to claim a place at Tokyo 2020, but she wants to boost her global standing further at the World Championships this week.

"Ideally I'll be able to complete the triple of national, European and World [gold], but a lot of people want that title, and a top-five or top-10 would be beneficial," says the rider, who missed the 2018 edition through concussion.

"In the short term it's just about qualifying [for the Olympics], but once we're there we're definitely looking at a podium, if not that number one position."

'It will be hard not to celebrate,'

Nettey, 2 others return to Hearts training

Mourinho made me more 'savvy' - Rashford

What questions still remain for the ex-Team
Next Item