Cesar Azpilicueta scored from close range and thought he had snatched a late winner, but it was ruled out by the video assistant referee

Chelsea mounted a stirring fightback from 4-1 down to earn a crucial Champions League point as Ajax ended with nine men on a night of high drama at Stamford Bridge.

The Dutch champions, semi-finalists last season, were in calm control and looked on course for victory when Donny van de Beek gave them a three-goal lead 10 minutes after the break - but in a chaotic closing period Chelsea completed a remarkable recovery as the visitors lost their discipline.

Having pulled one back through Cesar Azpilicueta's close-range finish to make it 4-2, the game turned on its head in 60 seconds of high drama in the 68th minute.

Jorginho scored from the spot for the second time in the game to set up a frantic finale.

Substitute Reece James, 19, pulled Chelsea level and became the club's youngest Champions League goalscorer with a low strike from a rebound after Kurt Zouma had headed against the bar.

With the hosts pushing for a winner and backed by a buoyant crowd, Azpilicueta thought he had scored their fifth goal, only for the video assistant referee to intervene and detect a handball by Abraham.

It was an ending to match the game's opening, which featured two goals in the first four minutes, Abraham flicking Quincy Promes' free-kick into his own net before Jorginho equalised with his first penalty after Christian Pulisic was fouled.

Ajax retook the lead when Promes headed in a brilliant cross from Hakim Ziyech, whose free-kick from a tight angle led to the third goal as the ball came back off the post and went in after hitting home keeper Kepa Arrizabalaga in the face.

Van de Beek looked to have settled matters, finishing off from 12 yards when unmarked, only for Chelsea to rally in stunning style.

Both sides had chances in the closing moments but in the end settled for a draw which leaves them both level on seven points with Valencia, who beat Lille 4-1 in this extremely tight Group H.

One look at the Group H table shows how important this point might be to Chelsea before a potentially decisive visit to Valencia next, on 27 November.

For the first 55 minutes, Chelsea looked naive and exposed at this level as they were cut apart by Ajax's slick approach work and lethal delivery from out wide, which was instrumental in their first three goals.

What this emerging Chelsea side under Frank Lampard does not lack is heart and fighting spirit. It was all on display in those final 30 minutes as Ajax wobbled and they took advantage.

Once Azpilicueta's close-range tap-in made it 4-2 and opened the door, Chelsea barged through it as Ajax found themselves pinned back and suffering a numerical disadvantage.

When James levelled it up at 4-4 with 16 minutes left, all the smart money would have been on Chelsea completing the turnaround with victory.

It almost came as Azpilicueta saw his goal overruled by VAR, with the refreshing sight of Rocchi actually consulting a screen to decide for himself, and with two late chances for substitute Michy Batshuayi, one of which brought a superb save from Ajax keeper Andre Onana.

In the end, Chelsea had to settle for a share of the honours - something they would have readily accepted after 55 minutes but which they might have taken with slight disappointment at the end.

This was a thrilling spectacle in which both teams deserved some reward. 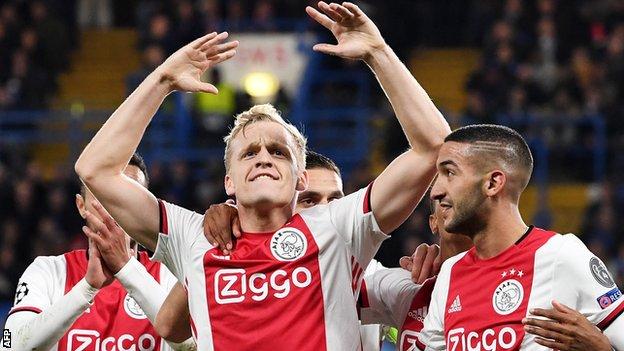 Erik ten Hag's young Ajax side graced the Champions League last season with a series of virtuoso performances before losing the semi-final to Tottenham in the dying moments of the second leg in front of their own supporters.

The campaign delivered a clear signal that this great old club was back among the elite and, despite losing two outstanding young players in Matthijs de Ligt to Juventus and Frenkie de Jong to Barcelona, they have moved on impressively.

Ajax were determined to make amends for their 1-0 loss to Chelsea in Amsterdam and were hugely impressive as their pace, movement and lethal delivery established a stranglehold in their first hour.

Yes, it fell apart for a 20-minute period but the closing phases demonstrated this is a team built and coached in the great traditions of the club, shrugging off the fact they were down to nine men to actually push forward in search of a winner.

They almost got it when Arrizabalaga had to save from Edson Alvarez, but the point pleased their small group of supporters inside Stamford Bridge.

Ajax may have lost the lead and might feel a sense of injustice about losing two players, but they earn full marks for entertainment value and their purist approach to the game.

Chelsea are the third English side in Champions League history to come from three goals behind to avoid defeat and the first since Liverpool in the 2005 final against AC Milan, which the Reds won in a penalty shootout.

Man of the match - Jorginho (Chelsea) 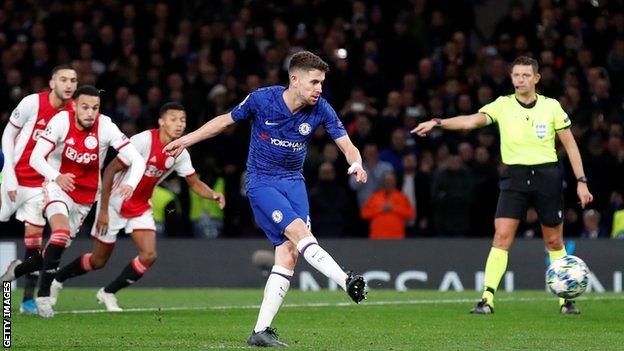 'Madness' - what they said

Chelsea boss Frank Lampard told BT Sport: "I can't explain the game. For all the things we might analyse back, the madness of the game, we are here for entertainment I suppose and anyone who watched that has to say 'what a game of football'. Respect to Ajax, what a spectacle.

"We looked dangerous and I felt we would build momentum. I'm not happy overall, this is the Champions League and we made too many mistakes.

"The biggest pleasure is the spirit the whole stadium showed. I can't give you much on the red cards, I didn't really see what they were for.

"At half-time I would have taken a draw, for sure. Let's take it as what it was. I was expecting somewhere towards 10 minutes of added time, not sure where four came from."

Ajax manager Erik ten Hag was asked on BT Sport about the two red cards within a minute of each other and said: "False, it was handball, but what can he [Joel Veltman] do with his hand? It's no handball, no booking, but we have to accept it.

"I'm proud of this team, it was a magnificent development and we take it as a positive.

"Everyone will have the same opinion from the stands and from the television. We dictated and we are very bitter that one decision could change everything."

Chelsea's next game in the Champions League is away to Valencia (17:55 GMT) on 27 November, before Lille take on Ajax at 20:00 GMT. The final round of matches happens on 10 December with Ajax at home to Valencia and Chelsea entertaining Lille.

Before then, Chelsea return to Premier League action on Saturday when they face Crystal Palace at Stamford Bridge (12:30 GMT).

Williams bounces back to win on return

The Masters to take place without fans

Blitzboks regroup with on eye 2021 Olympics

How Red Bull built a league side

The downfall of Heckingbottom at Hibs
Previous Item
NEXT