Champions League holders Liverpool collected another victory in their relentless campaign by sneaking past Genk at a subdued Anfield.

Jürgen Klopp's side lost to Napoli in their opening Group E game - their only loss in any competition this season - but have picked up three straight wins to move towards the knockout stages.

Georginio Wijnaldum stabbed into the roof of the net from close range after captain Sebastian Dewaest made a mess of clearing James Milner's low cross.

With the hosts failing to build on their 14th-minute lead, Genk's Tanzanian striker Mbwana Samatta powerfully headed in the equaliser at the near post from a corner five minutes before half-time.

But having scored twice in Belgium when Genk were beaten 4-1 on 23 October, Alex Oxlade-Chamberlain was the match-winner early in the second half, spinning and converting a low strike into the bottom corner.

Liverpool move top of the group ahead of Serie A side Napoli, who were held to a 1-1 draw by Red Bull Salzburg.

Signs for Man City to exploit?

Liverpool ultimately edged this test against Genk but know their sternest challenge of the season will come on Sunday against Premier League champions Manchester City.

Despite the victory, Liverpool's biggest concern will be a lack of clean sheets - now just one in their past nine games in all competitions - given that their defence provided such a solid base last season as they agonisingly missed out on the title to City, but became champions of Europe for the sixth time.

The Reds lacked their usual fluency and zip at times, and that seemed to permeate into the stands, as the usual fiery Anfield Champions League cauldron was lukewarm for large periods, sporadically bursting into life and after both goals.

The hosts dominated the ball with 72% possession and fired off 28 shots - with Mohamed Salah's low drive from an angle and curling effort both struck wide.

Divock Origi, who scored decisive goals in the semi-final and final for Liverpool last season, dragged a shot off target, while his low, skipping drive was pushed away by 21-year-old goalkeeper Gaetan Coucke at full stretch.

After Oxlade-Chamberlain had made it 2-1, Genk could have equalised for a second time late on, but Bryan Heynen's thumping effort was pushed away by Alisson, extending their run without a victory in the Champions League proper to 16 games - a competition record.

Fixtures piling up for Reds 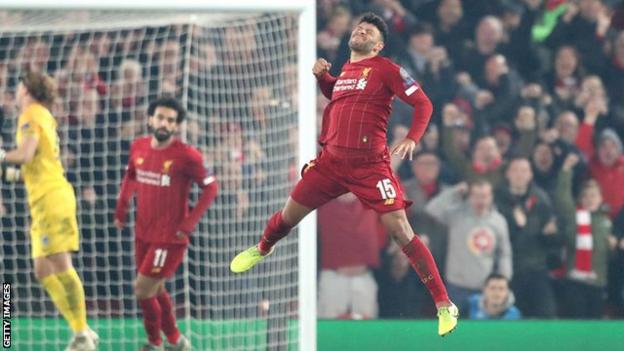 The biggest talking point a couple of hours before kick-off was Liverpool's decision to play their Carabao Cup quarter-final at Aston Villa and Club World Cup semi-final in Qatar within 24 hours of each other, fielding two separate teams.

Klopp had previously ruled out this possibility but the club said in a statement that although it was "not an ideal scenario" the outcome was reached in "the best interests of the competition".

Liverpool have won 14, drawn three and lost only one of their games in all competitions this season, though that winning habit and squad depth will be severely examined after the international break.

That is the price they have to pay for success.

From 23 November to 2 January, the Reds face an arduous period of 12 games in 37 days across three competitions - the Premier League, Champions League and Club World Cup - with an FA Cup third-round tie still to be determined in the first week of 2020.

That suggests there will be plenty more rotation. Of the six players brought into the starting line-up here, Oxlade-Chamberlain was on the scoresheet once more, Naby Keita worked hard in midfield beside him and Joe Gomez contributed four clearances and three interceptions at the back.

More of the same will be required from the fringe players over the coming months.

'We didn't finish our situations'

Liverpool manager Jürgen Klopp to BT Sport: "We didn't finish our situations in the way we could have done. We had a lot of shots and some really big chances that we usually use. We didn't do that and it kept the game open. That gave them a lot of energy.

"The players came through but you saw after a while it gets hard to get that rhythm and at the end of the game it was not there.

"We got a little bit of trouble but not really. It was job done. If we had scored two or three in the first half, nobody would have thought that couldn't have happened. But it went 1-1 and then it got tricky. Now we are all good."

Man of the match - Alex Oxlade-Chamberlain 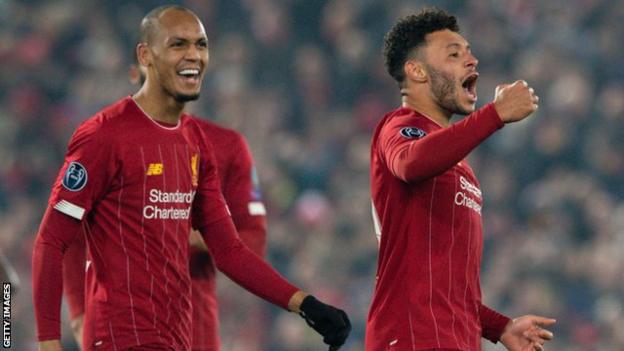 Leaky at the back - the best of the stats

Liverpool host Premier League rivals Manchester City in a huge game at Anfield on Sunday, 10 November (16:30 GMT). They take on Napoli in their next Champions League game on 27 November, also at home.

'I don't think I've seen a game like it'
Next Item