If England's sold-out game against Germany at Wembley wasn't big enough already, the team's recent results have raised the stakes even higher.

Since the World Cup there has been a greater focus on the Lionesses, meaning Saturday's friendly could set an attendance record for a women's match in the United Kingdom.

But it has also brought increased criticism of the team, which I don't think is a bad thing.

It shows that interest has never been higher, and although it can be difficult to deal with, it's almost like you cannot have the heightened interest without a bit of extra flak.

The media spotlight helps bring a potential 90,000 fans to London on Saturday, which is what everyone behind the scenes has been working towards for the last five or six years.

It will be a huge occasion for everyone.

But we have to accept that if results aren't going our way, as they have been in the build-up to the game, then there will be some negativity. That's just part of a massive sport like football.

From a players' perspective, the desire to win never changes. Every time you put on an England shirt, you want a good performance both for yourself and the team.

And for those who are new to the sport, I'd urge them not to judge too quickly.

Are you basing your criticism on one match?

You have to remember that England reached a World Cup semi-final where they were narrowly beaten by the eventual champions, and since then the context of games has changed.

And if you are criticising the players, have you watched them play each week at their Women's Super League teams?

Some players will be motivated to prove their critics wrong, and what better opportunity than facing Germany in a historic game to move forward with even more fans on board.

Past six months have been 'real struggle'

Unfortunately, I won't be in the England squad to face the two-time World Cup winners on Saturday, and it's largely been out of my control.

Having missed out on the World Cup, I am now fully recovered, fit and desperate to get back in an England shirt again, but I haven't been playing many games for my club Lyon this season.

A few weeks ago, England head coach Phil Neville came over to France to check on me and my other England team-mates here - Lucy Bronze, Nikita Parris and Alex Greenwood - and told me he was extremely pleased with how I was training.

He said I looked like I wanted to be out on the training pitch until it's dark, which is true. After the injury, I don't take being out on the grass for granted.

But he said that I need to be playing more minutes for Lyon before I can get back into the England squad and the manager at Lyon is the only person who can control that.

I've only played in six games this season, and all but one have been as a substitute so it has been frustrating.

Part of it is because the competition for places at Lyon is so high. This is a team which is arguably the best female sports team in the world, with six Champions League titles, including the past four in a row.

So training is ruthless - you cannot give the ball away, you cannot miss a chance.

I'm not going to lie, it has been a real struggle over the past six months.

All I can do is empty the tank in training every day and be ready when I'm called upon. Hopefully those chances for Lyon and England will come soon. 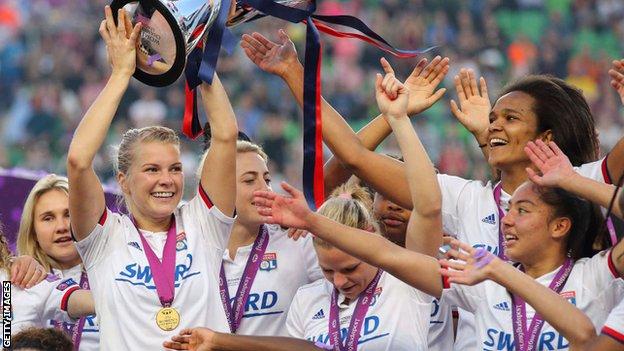 Despite the ups and downs, I have no regrets signing for Lyon in July 2018.

I left Manchester City craving for a new challenge but it has been more challenging than I expected. I get the feeling the benefits from this period might come wherever the next chapter may be.

There has been plenty to get my head around from the language, to fitting in at Lyon, and even how football is played in France, which is a lot different too. There are so many turnovers.

But I'd like to think I'm quite level-headed about it all. Even though there have been disappointments, I also feel much richer with knowledge and experience.

One of the things I'm most proud of is how I've learned to speak French, that's a life skill that should help me in the future.

In some ways, it was a necessity because it was quite hard to fit in at first.

Lucy was here already but I was conscious not to bombard her with questions or impose on her when I first arrived, and I struggled to find a connection with many of my team-mates. I guess it's the same as any workplace, but I felt like I lost my identity a bit because I withdrew into myself and wasn't my normal, bubbly self.

The best way to solve that problem was to learn the language and engage with people in the common tongue. With Alex and Nikita coming in too, this season has been much better and I feel a lot more like myself which has helped with my football too.

I've become friends with Ada as well, and speak French with her even though she is Norwegian. She speaks it fluently and it helps because you have to work on it every day. Reading the sports sections in the newspapers helps too.

I've never met anyone who believes in them self as much as she does.

Her drive and confidence are really prominent but it doesn't come across in a negative way. Sometimes I sit on the bus and I look at her and she has her music on and you can just tell that she will score that day. She has that aura about her but is extremely humble as well.

She is down-to-earth and has good human values as well, so it's understandable why she is a role model to many. The way she delivered her speech and dealt with some of the comments when receiving her Ballon d'Or says a lot about her.

She is a class individual and player.