Liverpool struck a potentially decisive blow in the Premier League title race as victory over reigning champions Manchester City at Anfield opened up an eight-point lead at the top of the table.

The confrontation between the two domestic superpowers had been billed as a defining moment in Liverpool's 30-year quest to land the title - and this outcome leaves them with a commanding advantage over Leicester City in second place.

Liverpool took the lead after only six minutes when Fabinho flashed a 25-yard drive past keeper Claudio Bravo, deputising for injured Ederson, the goal given after a video assistant referee check for handball against Trent Alexander-Arnold.

Manchester City were threatening in possession but Jürgen Klopp's team are ruthless in attack, as proved when Mohamed Salah doubled their lead six minutes later, heading in at the far post from Andrew Robertson's superb cross.

Raheem Sterling missed a headed chance and Sergio Agüero saw a shot deflected on to the post as City tried to find a foothold but it was all over six minutes after the break when Jordan Henderson's pinpoint delivery lured Bravo into a critical moment of hesitation and Sadio Mané headed in.

Bernardo Silva pulled one back with 12 minutes left but it was too late for City, who will rue not making the most of their plentiful possession and opportunities as they now lie nine points off the top in fourth place.

Guardiola was fuming at the final whistle, appearing to thank referee Michael Oliver sarcastically before leaving the pitch, shortly after being enraged when another penalty claim against Alexander-Arnold was waved away.

Liverpool, meanwhile, celebrated a victory that gives them a real hold at the Premier League summit.

The manner in which Klopp and Anfield celebrated this victory said everything about its magnitude - if self-belief was not surging through them before, then it surely is now after last season's champions were overcome.

A huge roar went up from the Kop as Liverpool's players gathered in front of it after the final whistle. Such is their form this season, with 11 wins from 12 league games, that it is surely their title to lose now. This is a team who have lost one of their past 51 league games - where will the numerous slips needed for them to lose this lead come from?

Liverpool's defence was actually seriously troubled by City, but Klopp's side can score from anywhere at any time makes them so dangerous - as it proved here.

City opened well but were stunned by Fabinho's superb strike and once Robertson provided that terrific arcing cross for Salah, Liverpool were in control of what may well come to be seen as a pivotal moment in the season.

Liverpool were relieved when City missed what opportunities they had and the scoreline was flattering - but Klopp and his players will not care.

They have game-changers in all areas of the pitch and carry an ominous threat even when under pressure.

There is a growing sense of destiny about Liverpool's season, although they will still look in the direction of Brendan Rodgers' excellent Leicester City side and Chelsea after seeing off Manchester City at an exultant Anfield.

Pep Guardiola's touchline rage late in the game, after referee Michael Oliver had ignored another claim for handball against Alexander-Arnold, was a mirror into his mood.

Guardiola will know this may well be the moment when a third successive Premier League title was pushed out of reach.

Yet he will also feel City had the chance to take something from this match, with chances created and missed, especially by Sterling and Agüero.

This was not a poor performance but City's defence is vulnerable without Aymeric Laporte and the loss of Ederson to injury not only robbed them of his outstanding goalkeeping ability but also his important contribution to their overall possession game.

Bravo was not at fault for Liverpool's first two goals but he was suspect for the third. He simply does not give off the assurance and confidence of City's Brazilian first choice.

David Silva's midfield influence was also missed but the bottom line is that over the season so far Liverpool have looked the more driven and less flawed team, a fact reflected in the league table.

Manchester City and Guardiola will not give up the fight, as it is only November after all, but it looks a long way back now to catch a Liverpool team that will feel the force is with them.

Man of the match - Fabinho (Liverpool) 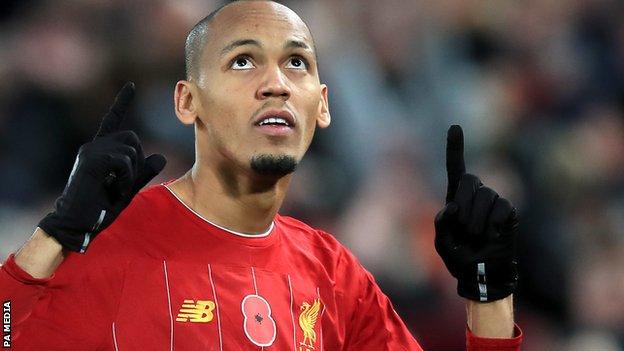 Fabinho's stunning shot set Liverpool on their way, and the Brazilian midfielder excelled throughout

'What a game' - manager reaction

Liverpool manager Jurgen Klopp, speaking on BBC 5 Live: "What a game. If you want to win against City you have to do something special and we had to be intense.

"When City started to control it more in the last 15 minutes, it was tense, but then you saw the quality and what the boys can do it. The boys did 75 minutes of unbelievable stuff."

Manchester City manager Pep Guardiola, speaking on BBC 5 Live: "We lost - we'd liked to win but now we have to rest and prepare for Chelsea next.

"We played an incredible performance, I don't know how many teams can come to this stadium and play the way we did. They scored with the first shot on target, but we played incredibly well.

"There are three teams that have more chances to win the Premier League than us. We're in November so let's see what happens."

Anfield continues its hold over Man City - the stats

Liverpool travel to south London to play Crystal Palace on Saturday, 23 November at 15:00 GMT, while City are at home to Chelsea at 17:30 later that afternoon.

Sam Bird signs for Jaguar for next season

Muntari: FIFA must do more to fight racism