Rafael Nadal's bid to end the year as world number one faltered with a straight-set loss to defending champion Alexander Zverev at the ATP Finals.

The Spaniard, a fitness doubt before the season-ending event in London with an abdominal injury, was beaten 6-2 6-4 in their opening round-robin match.

Nadal, who has not completed a tournament since September's US Open, was out of sorts and error prone.

Novak Djokovic, who can overtake Nadal at the top of the world rankings this week, leads the other group after winning on Sunday.

The top two players in each group after the round-robin stage progress to the semi-finals on Saturday.

The men's season-ending event, which is taking place in London for the penultimate year, features the top eight players of the year.

I was not good enough - Nadal

Nadal had never lost to Zverev in five previous meetings but against the German on Monday he was comprehensively outplayed.

The Spaniard had not completed a tournament since September's US Open, withdrawing from Shanghai (left hand) and the Paris semi-finals (abdominal), and he had only started serving "very slowly" on Thursday.

He was broken in the fifth game of the first set, netting a routine forehand, and then lost the next five games as 22-year-old Zverev took charge with Nadal failing to carve out a single break point in the entire match.

The Spanish 19-time Grand Slam champion refused to blame injury for a below-par performance, where he managed 13 winners compared to 29 for Zverev, and said he had not been in any pain.

"The physical issue was not an excuse at all," he said. "The only excuse is I was not good enough tonight.

"What really matters is I need to play much better in two days. That's the only thing. We knew that it was going to be tough, because the period of time since the injury until today is very short, but we are here trying."

Nadal has never won the end-of-season showpiece, with injuries often plaguing his attempts. He did not play last year and pulled out after his first match in 2017, with the Spaniard having been unable to participate fully in seven editions of the event.

Djokovic will finish the year as world number one if he wins the tournament and Nadal does not reach the semi-finals.

Alternatively, if the Spaniard fails to win a round-robin match, the Serb will overtake him if he wins two group-stage matches and reaches the final.

Seventh seed Zverev has now beaten Roger Federer, Djokovic and Nadal in consecutive matches at the venue, where last year he claimed the biggest title of his career.

Since stunning Djokovic in last year's final, the German has won just one title and failed to make deep runs at the Grand Slams - with his best showing a French Open quarter-final.

"It is obviously great," he said. "Everyone knows how much I have struggled the whole season. It means so much to be playing here again where I won my biggest title last season. It means everything to me."

'We won't go for dinner together' - Tsitsipas on Medvedev rivalry 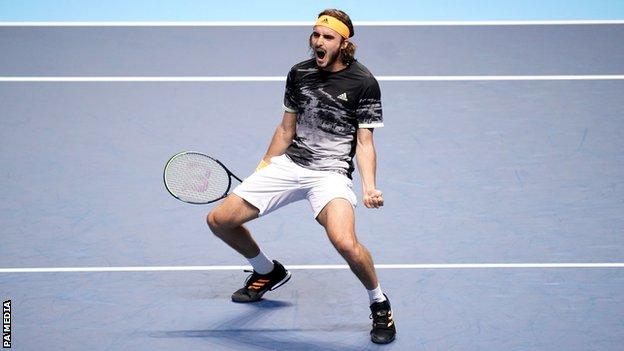 Tsitsipas has won two titles this year in Estoril and Marseille

Tsitsipas, the youngest player in the tournament, had lost all five of his previous meetings with US Open runner-up Medvedev and the pair have had a difficult relationship since a row over a net cord in Miami last year.

Tsitsipas then called the Russian's playing style "boring" after a defeat at the Shanghai Masters last month.

The pair are two of the most highly-rated young players in the game - two of four singles players aged 24 or under at this year's championships - but Tsitsipas was rewarded for being the more aggressive of the two players in a match that featured just one break of serve.

Asked whether beating Medvedev meant extra to him, the Greek said: "It means more than extra.

"It's a victory that I've craved for a long time now and it's great that it came in this moment.

"Our chemistry definitely isn't the best that you can find on the tour. It just happens with people that it's not that you can just like everyone.

"It's not that I hate him. I guess, as he said, we will not go to dinner together." 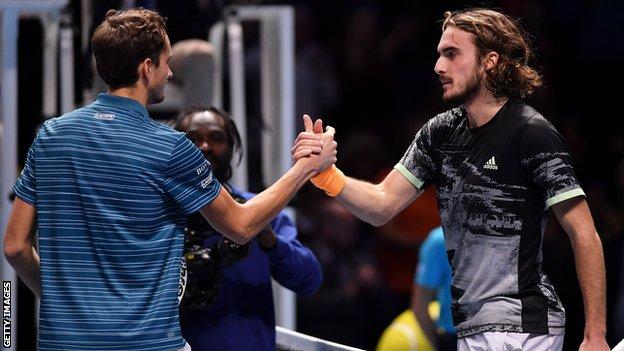 There were no breaks in the first set but Tsitsipas played better in the tie-break, earning the crucial mini-break to move 6-5 ahead by winning a gruelling point at the net with a volley.

The second set was similarly tight but Tsitsipas remained immaculate on serve - he did not face a break point in the match - and eventually broke serve to go 5-4 in front, helped by the Russian choosing not to volley a return at 30-30 that landed in.

Tsitsipas served out the match in the following game, and celebrated enthusiastically after the final point as he moved top of the early group table.

Tsitsipas, who beat Federer en route to the semi-finals of this year's Australian Open, won the Next Gen event a year ago - the season-ending tournament for players aged 21 or under.

He said he had "goosebumps" when making his debut in London.

"I watched this event for the first time in 2010, I used to watch on TV dreaming of potentially playing on these courts," he said.

Alonso to point to No To Racism badge

Shiels to call on youth against Latvia

Black Stars get another cup of Milo?

'I never thought I would get cancer'
Next Item