John Cooney spoke of his relief after his shocking first-half penalty miss did not cost Ulster victory in their Heineken Champions Cup victory at Bath.

Ulster led 7-6 in first-half injury-time when Cooney, who had scored an earlier breakaway try, missed from in front of the posts.

However, Cooney's late penalty helped seal a dramatic 17-16 win at The Rec.

"I knew if we came out and we lost by point, I would be pretty heartbroken," Cooney told Channel 4.

"I was kicking myself at half-time. [But] It's about how you respond." 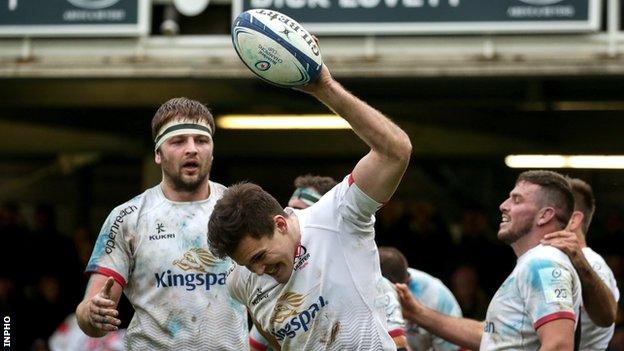 Cooney paid tribute to team-mate Jacob Stockdale after the Ireland wing produced a sensational intervention to prevent a last-gasp Bath try as he intercepted Zach Mercer's pass to Semesa Rokoduguni with the line seemingly at the wing's mercy.

"They nearly scored at the end. That was a collective [effort today]. How hard we worked for each other. To see Jacob get back and stop the try," added Cooney.

"We won those big moments that we didn't win last week against Munster [in the Pro14].

"We talked about that several times in the game. 'Win that moment and try and get back into the game'."

Cooney said Saturday's "huge" victory backed up their European away victories in England over Leicester and Harlequins in recent seasons.

"We've actually had a bit of purchase away in England over the last few years.

"These are games we really enjoy and we create our own atmosphere and when you look at the fans we have here today, it's incredible."

'Frustrating' hosts 'not far off' best -Dave
Next Item