2021 Africa Cup of Nations: Morocco held at home by Mauritania

Morocco were skippered by new captain Hakim Ziyech in the 0-0 draw with Mauritania in their first group match of 2021 Africa Cup of Nations qualifying on Friday night.

A poor start by Bosnian Vahid Halilhodzic as coach of Morocco continued on Friday when lower ranked Mauritania forced a 0-0 draw in their first Group E match in 2021 Africa Cup of Nations qualifying in Rabat.

Morocco are ranked 42nd in the world, 63 places above Mauritania, and the barren deadlock left Halilhodzic with only one win from five matches since succeeding Herve Renard three months ago.

Also on Friday, Tunisia thrashed Libya 4-1, Tanzania were late 2-1 winners over Equatorial Guinea and it was 0-0 between Zimbabwe and Botswana.

Morocco's draw with Mauritania was a disappointing start to the campaign for Halilhodzic who has been tasked with taking Morocco to at least the semi-finals of the 2021 Nations Cup in Cameroon.

Failure to overcome Mauritania, who competed at the finals of the tournament for the first time at Egypt 2019, suggests much hard work lies ahead for the 67-year-old former Ivory Coast and Algeria boss.

There will be little time for Halilhodzic and his team to reflect on where they went wrong, however, as Morocco are away to bottom Group E side Burundi in Bujumbura on Tuesday.

Central African Republic, who have never qualified for the Cup of Nations, top the table after a 2-0 home win over Burundi on Wednesday.

Tunisia, who finished fourth at the 2019 tournament in Egypt, made an impressive Group J debut by beating north African neighbours Libya 4-1 in Rades near Tunis on Friday night.

A couple of players from French Ligue 1 clubs inflicted the damage with Wahbi Khazri of Saint-Etienne and Saif-Eddine Khaoui of Marseille scoring two goals each.

Khazri missed a penalty before putting the Carthage Eagles ahead on 35 minutes and Khaoui doubled the advantage before Hamdou Elhouni halved the deficit in first half stoppage time.

Khaoui claimed his second goal eight minutes into the second half and Khazri completed the rout in the final minute.

It was a demoralising start for veteran Tunisian coach Faouzi Benzarti in his second stint as Libya boss.

Tunisia lead on goal difference from Tanzania, who came from behind to score late to beat Equatorial Guinea 2-1.

The National Stadium in Dar es Salaam was about half full for the Group J fixture.

Tanzania enjoyed most of the ball in the first-half and created several good chances but it was Equatorial Guinea who scored first after 15 minutes.

Former West Ham midfielder Pedro Obiang scored after 15 minutes when he hit a powerful yet speculative effort from 35 yards that keeper Juma Kaseja should have tipped over the bar. 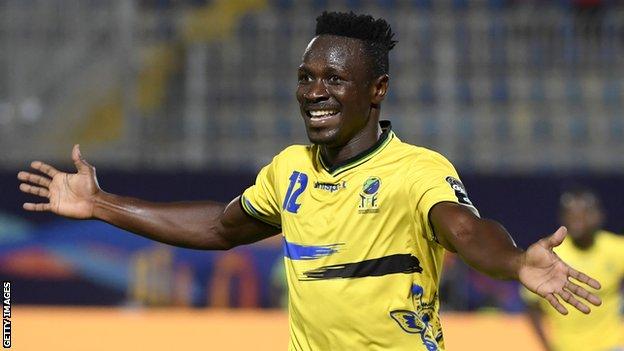 Tanzania's Simon Msuva, who plays in Morocco, scored the equaliser

Captain Mbwana Samatta was the hosts' biggest threat and he will feel he should have scored just before half-time but keeper Felipe Ovono denied him with the second part of a smart double-save.

Simon Msuva grabbed the equaliser on 68 minutes with a cheeky move to nip in front of Ovono, who was poised to catch a cross, and head the ball against the post before hooking the rebound into the net.

Salum Abubakar scored a spectacular winner in injury time with a fierce shot from outside the area that flew past Ovono.

Abubakar's celebration saw him run down one of the exits and it almost looked as if he was going to run out of the stadium.

Hosts Zimbabwe dominated possession in the first half of their Group H game at the National Sports Stadium in Harare but Botswana held firm.

The closest the Warriors came to scoring in the first-half was a long range free-kick from Knowledge Musona whose effort was tipped over the bar on the half hour mark.

Zimbabwe's dominance continued after the break but some poor passing and some resolute defending by Botswana ensured the game ended goalless.

Kouame out of Ivory Coast's U-23 campaign
Previous Item
NEXT

Nigeria miss out on Olympic place
Next Item