Inter Milan striker Romelu Lukaku says the 'Black Friday' headline used by Italian newspaper Corriere dello Sport is "one of the dumbest" he has seen, while Roma's Chris Smalling condemned it as "wrong and insensitive".

The headline accompanied pictures of Lukaku and Smalling prior to Friday's match between their two sides.

"You guys keep fuelling the negativity and the racism issue," Lukaku said.

Smalling urged the newspaper's editors to "understand the power they possess".

Roma, along with Inter's rivals AC Milan, announced later on Thursday they will not work with Corriere dello Sport until January.

A joint statement released at the same time by Roma and AC Milan said: "We have decided to ban Corriere dello Sport from our training facilities for the rest of the year and our players will not carry out any media activities with the newspaper during this period.

"Both clubs are aware the actual newspaper article associated with the 'Black Friday' headline did portray an anti-racist message and for this reason we have only banned Corriere dello Sport until January.

Smalling is on loan from Manchester United, whose Ole Gunnar Solskjaer said the club had been in touch with the England defender.

At a news conference on Friday, Solskjaer said: "When you see that paper, you say: 'Wow. Really? Is that possible?' It's the worst front page I've ever seen. It has to be.

"Of course we have been in touch with Chris, just so he knows that we'll back him and we support him, and with Romelu as well."

"It was only a way to celebrate diversity," the newspaper said.

Earlier on Thursday, Roma's chief operating officer Francesco Calvo said he did not think the headline was a "clear case" of racism, but called on people in positions of authority - including clubs, players and media - to be more careful with the language they choose.

"This isn't like the racism we've experienced many others in Italy in the recent period, this is superficial and unfortunate of people not understanding of how messages can be mixed up in words and perceived in a bad way," Calvo told BBC Radio 5 Live.

"All of us who work in football have a bigger responsibility, which is giving the right message to people, being a role model and trying to educate people.

"This is what everyone should do, including this newspaper. We should be very careful with the words we use.

"This only allows people to talk about racism in Italy instead of giving a message against racism because people will only read the headline and not the article."

All 20 Serie A clubs made a united pledge last week to combat Italian football's "serious problem" with racism because there is no more "time to waste". 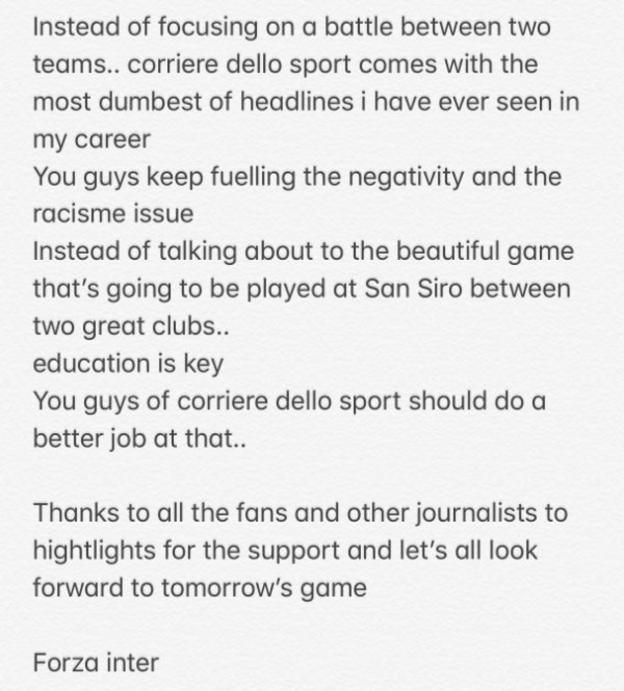 Dygert has leg surgery after crash