An 88th minute penalty converted easily by Naby Keita of Kumasi Asante was all that the Porcupine Warriors needed to claim the maximum points from arch rivals Accra Hearts of Oak at their own backyard at the Accra Sports Stadium during their fifth week Premier League encounter.

In one of their attacks in the 88th minute, a hard pressed defender of Hearts of Oak, Robert Addo Sowah, was adjudged by referee Emmanuel Eshun to have propelled the ball with his hand in the vital area of Hearts, causing the referee to whistle and point to the spot.

The referee’s decision ignited outrage by Hearts players, as they rushed on him to protest vehemently, but the referee stood his ground until sanity prevailed for Kotoko’s Keita to slot in the ball to give Kotoko a 2-1 victory over Hearts to claim the maximum points at stake. 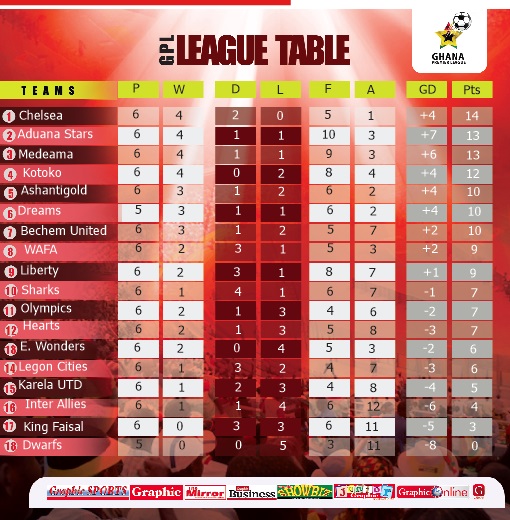 Earlier in the 11th minute, Kotoko’s Justice Blay, who was adjudged the best player of yesterday’s match, had soared above his markers to nod home a beautiful free kick outside Hearts vital area.

The goal, which was scored against the run of play, caused a spontaneous celebrations among the Kotoko fans who before then had sat on thorns as Hearts relentlessly bombarded their goal area with shots from all angles.

It started in the second minute when Hearts striker Daniel Afriyie Barnie was put through in the box but with only Kwame Baah at his mercy, the striker shot wide.

Hearts continued their dominance early in the match and created glorious goal scoring opportunities in the fifth and seventh minutes but Kofi Kordzi and Joseph Esso, who had those opportunities, wasted them to the detriment of the Hearts fans who were busily singing their anthem to goad them on.

It was not until the ninth minute that Kotoko managed to settle down and started surging forward into the vital area of Hearts and in one of their attacks, Patrick Yeboah was put through but he messed up the chance to put Kotoko into the lead.

Two minutes later, Justice Blay taught his teammates how to convert chances when he soared above his markers to nod a free kick past bemused Richard Atta in post for Hearts.

While the early goal caused the Kotoko fans to jubilate, it fired up the Hearts players to get their act together as they fought gallantly for the equaliser but were unable to do so and went into the dressing room with a goal down.

The second half saw both teams introduce new players as they continued to probe for goals, but it was not until the 63rd minute that Hearts brought their fans onto their feet through a sublime goal scored by Joseph Esso whose header caught Kwame Baah in post for Kotoko flat footed.

South Africa to Attend CAF Meeting in Morocco
Next Item