I am still confident Liverpool will get the result they need at Anfield against Atletico Madrid, but we saw on Tuesday night just how tough that will be to achieve.

The final pass was just not there for the Reds in the first leg, which is something that will have to change if they are going to turn the tie around and continue the defence of their Champions League title.

But, as I said during my co-commentary of the game on BBC Radio 5 live, the main reason Liverpool drew a rare blank in their 1-0 defeat was Atletico's brilliant defensive performance.

As a former defender myself, it was exquisite to watch.

When you saw it from the vantage point myself and John Murray had in the stadium, you could see the effort and organisation that went into it - the lines Atletico keep, how compact they are, and the space they close down so the gaps in midfield are so small.

Their team-work was absolutely phenomenal, and their manager Diego Simeone was like the conductor on the touchline.

Whether he was pushing his players up, or dragging them back, they did exactly what he asked them to do.

A masterclass from Atletico 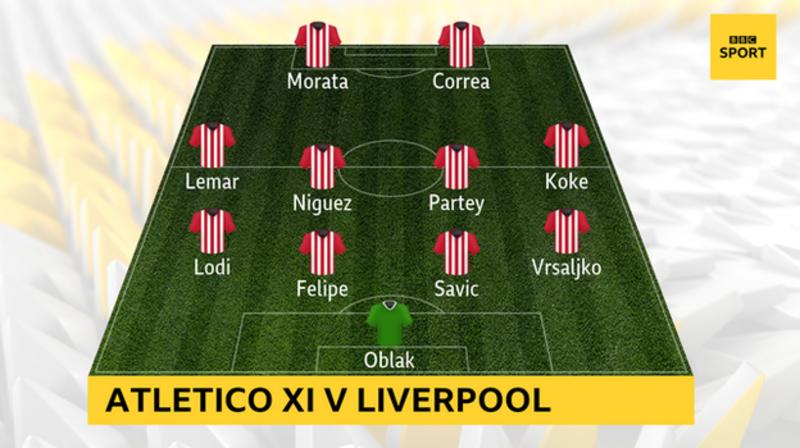 "Atletico lined up in a 4-4-2 formation but Koke always tracked Liverpool left-back Andrew Robertson so he was sometimes playing as a right-sided full-back in a back five. If not, he was pushing inside, on to Georginio Wijnaldum," said Stephen Warnock. "Saul Niguez went high and tight on Fabinho, and there were times when Atletico were almost going man-for-man and leaving a three versus three situation at the back, although reinforcements were never far away."

What Atletico did especially well against Liverpool was maintain their discipline, especially during the long spells of the game when they did not have possession - they had just 27.5% of the ball.

Their midfield and defence kept their shape throughout, which was the key to them keeping Jurgen Klopp's side out for 90 minutes.

This Liverpool team score a lot of goals because they play through the lines very quickly. They have their wingers cutting in from wide and get their full-backs forward down the sides to get the ball into the box.

If you wanted to write a coaching manual about how to stop them, then you would watch a video of this match first.

This was a masterclass in how to defend against a superior side and, to carry it out, the Atletico players needed discipline and a clear understanding of what was expected from them.

They also had to follow the instructions Simeone was barking throughout the game.

Inside the stadium, you could see the Atletico players looking at their manager all the time - asking 'what do you want from me?', 'what have I missed?' or 'what haven't I done?'.

If you have that belief in your manager, you believe his game-plan is going to work - and Simeone's worked to perfection.

The worry for Liverpool was always going to be conceding first, because Atletico are the worst team you could go a goal down to in a tie like this. The way they set up and the way they play is ideal for knock-out football.

Atletico knew that, if they got a goal, they could sit back on it. They did not have to push forward for more because they know that over two legs they are capable of frustrating Liverpool.

So, the way the first leg went, with them scoring after only four minutes, was perfect for them. It gave them a lead to defend, and they love doing that - they are the masters at it.

But what also helped Atletico was that Liverpool's final ball was so poor - often it was simply over-hit - and that too many of Liverpool's players had an off-night. 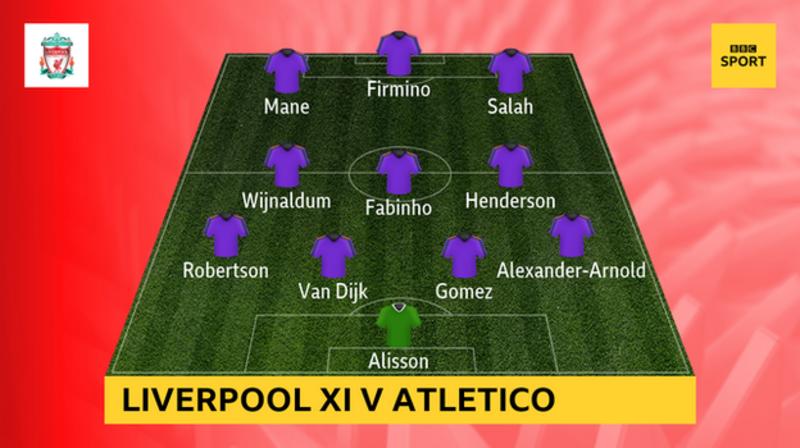 I thought the front three were lethargic and even Virgil van Dijk looked a bit uneasy, which is not something I would often say about him.

Trent Alexander-Arnold was another player who did not produce the quality we know he can, and his deliveries were disappointing.

We saw a couple of his early crosses go over the bar from open play and, even in dead-ball situations, he too often failed to beat the first defender.

I think a few of Liverpool's players will be disappointed with their performances, but I also think they will deal with any criticism in the right way.

If you look at the team's rise in the past few years, they have always dealt with any setback in the right way, and I don't think things will be any different with this defeat.

Why it will be different at Anfield

The question now is whether Atletico can do the same at Anfield on 11 March, and shut Liverpool out again.

I am sure Simeone and his players will be confident they can do it, but there are plenty of reasons why I think the second leg will be very different.

The Anfield atmosphere is one of them. Barcelona said last year that it would not bother them, but look what happened to them.

I think a European night there in a situation like this is one of those occasions the Atletico players will not understand until they play in it.

They have players who have played at Anfield before - the likes of former Chelsea strikers Diego Costa and Alvaro Morata - but these Champions League knock-out games bring a different atmosphere now.

The supporters understand the importance of the role they play and the impact they have on the players - that was evident on their way to winning the Champions League last season, when the support behind the team was just incredible.

They will need that again against Atletico, and I don't think there is any doubt they will get it. The crowd will be ready, just as Klopp says.

Of course Liverpool's record at Anfield - where they are unbeaten in the Premier League since 2017 and in Europe since 2014 - will build confidence too.

Like Atletico's players with Simeone, their results under Klopp mean they believe in their manager and his playing style, which does not often change.

Liverpool look to smother teams, and suffocate them, and they know how to make life difficult for any opposition who come to Anfield and try to shut up shop.

Yes, Klopp's side failed to get a shot on target in Madrid but there is no way I see a repeat of that statistic when the teams meet again on Merseyside.

I am expecting a 10-20% rise in Liverpool's tempo as they look to move the ball around quicker and draw the Atletico players out of position.

They will have to be patient, of course, but I am confident they will find a way through.

Plans to reduce Oval capacity to 6,000

How successful has the league's return been?

GFA to submit a proposal to the MoE

NPC submits proposal to the government