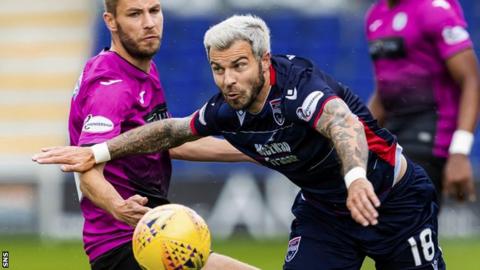 "There's one there," says Richard Foster, reaching for his books just out of shot on the video call. "'Study the layperson's understanding of gender and sexuality in the 'Me Too' era'."

Where do you start with that? "Exactly."

Foster is not having much trouble filling the days of lockdown. A final-year student of psychology with the Open University, he has 9,000 words of reports and essays to get through, interspersed with sessions on his wife's Peloton spin bike.

He's also writing his second novel. It's enough to be getting on with.

Those familiar with the 34-year-old's 17-season career to date might feel psychology an apt choice of subject. Those in the game he has clashed with - the likes of Jimmy Calderwood, Mark McGhee, Danny Swanson, Tommy Wright - might even have a laugh at the thought.

"It's an interesting subject," Foster says of his chosen degree. "I think it's something that transcends probably every workplace but also more specifically I like the idea of the relationship between a coach and a player, between the players themselves and how that works."

So how would he handle someone like himself? After all, he did once call Calderwood stupid.

Despite their recent bust up which led to his switch from St Johnstone to Ross County at the start of the season, Foster cites Wright alongside Walter Smith as characters who got it.

"Tommy and my gaffers now at Ross County, brought me into the squad knowing that I expect training to be at a good standard, I expect everyone to work as hard as they can, and if they don't I call them out on it. But they like that aspect of my personality because it's something I bring to the squad. So they allow me to be myself more.

"Sometimes people would go 'oh you lose your temper and shout'. Well, yeah, but sitting here just now, I can speak about anything and I won't get angry, I can say quite eloquently what I'm wanting to say.

"On a football pitch, I don't have time to hold someone's hand and be nice to them, it's got to be done now and then afterwards we can deal with it.

"But it's always the same. You always look back and think you could have done things better, or differently. But if you take away that aspect of my personality it probably takes away from me as a player."

'I'd be sacked for bullying in a normal workplace'

At 34, Foster is in the twilight of his career, with his deal at County due to expire this summer. He still feels fit and strong enough to keep playing, while acknowledging the end is nearing.

And though he - with his coaching badges and university education - is better placed than many players to cope with the difficult transition, life after playing still scares him. But not in the way you might think.

"My workplace is a lot different to your workplace," he explains. "The way you behave in a football dressing room, I'd probably be sacked for bullying within a week in your workplace.

"If you come in wearing the wrong shoes, jacket, or you've got the wrong haircut, everybody's on you all the time. If I walked into your workplace and said 'look at the state of your hair', people might get really offended by that. But for us that's just normal.

"So I probably need a smooth transition into regular workspaces, and that's what scares a lot of players. Football is all they know, even when they study, they want to reinvest themselves back in football in some capacity.

"I would probably make a joke - not through badness - that someone would find offensive and I find that it's just a bit of a minefield. Moving to nine-to-five in an office, I would just have to sit quietly the whole day, just in fear of upsetting the wrong person."

'My wife finds the abuse difficult'

Foster is no stranger to getting stick himself. He falls into the love-to-hate category for many supporters in Scotland, as his wife - singer-songwriter Amy Macdonald, seller of 12 million records - reminds him.

At Aberdeen, where he started his career, he played in two of the club's greatest European nights of the last two decades against Dnipro and Copenhagen, scoring in the latter.

But the loan move to Rangers in 2010 - which was not of his own choosing - and subsequent return as captain was worthy of crucifixion in the eyes of some. Now? He is such a pariah at Pittodrie that his nine-year-old son and dad don't go to watch him there because of the abuse.

"I met so many nice people there and had a lot of good career moments there, and it's almost like I'm not allowed to enjoy those moments," he says.

Foster was signed by Smith at Rangers during his last spell as manager and played in the Champions League during the 2010/11 season, the last time they clinched the title.

By the tail end of his second spell, when the club failed to gain promotion to the top-flight, he was outside a snowy Ibrox surrounded by seething fans trying to get into his car and screaming he wasn't good enough to wear the shirt.

Even this season, playing for County against St Johnstone, he says his wife was subjected to derogatory chants. 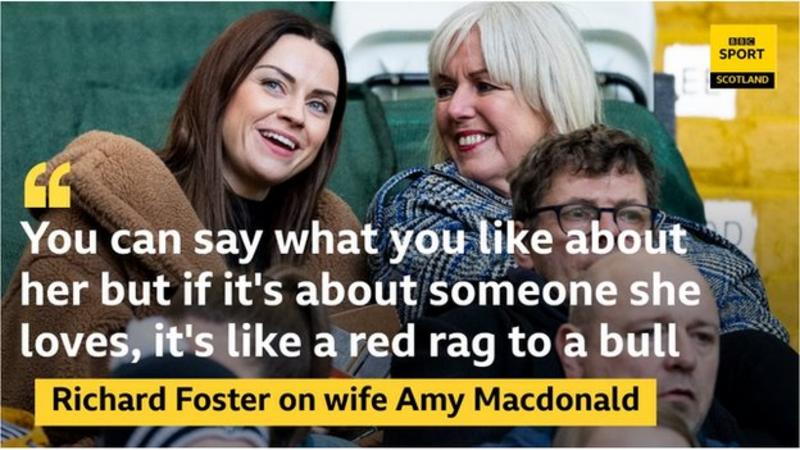 "My wife certainly struggles," Foster says. "I think she's one of those where you can say what you like about her, but as soon as you say something about someone she loves it's like 'woah' , it's like a red rag to a bull. So I think she finds it difficult."

The abuse doesn't affect Foster, though that doesn't mean it's easily shrugged off. What it does mean is that some victories are sweeter than others.

"The best one I had was a guy at Aberdeen," he says, giggling. "So the ball went into the crowd and I went to get it for a throw-in and he's got it. And I can see it's as if he's going to throw the ball at me as hard as he can.

"He goes to put his hand on the wall for leverage but he puts his hand on the gate, which opens out the way. And as he pushes, the gate opens and he falls forward, lands on his face and just hands the ball to me. I'm thinking 'that serves you right, I hope it hurt.'

"Little moments like that you take so much joy from just because of what you deal with game to game. And, yeah, there are times when I've probably overstepped the mark, but there's nothing better than seeing the incredulous look on someone's face when they're abusing me for 90 minutes and I just turn round and give them some back."

'Is my book any good? I don't really care'

The ultra-competitive, outspoken and sometimes combustible character on the field is what is often judged by the footballing public. But Foster is engaging and intelligent, an avid reader, and a writer of a crime-based novel.

His passion for reading started when he won a book voucher in second year of high school in Elgin.

He went into a book shop and didn't have a clue where to start, but spotted 'Green Mile' by Stephen King and, having seen the film adaption, plumped for it. Twenty years later, he has used his regular train journeys from his Glasgow home to Dingwall to pen his own story.

"I decided that I would get the train and I had an idea for a book," Foster says. "So I thought I may as well just write it down, and it kind of snowballed and I got into it. I'd be sitting on the train for three hours and before I knew it I was at my destination.

"I just got so caught up in what I was doing. And then I enjoyed the challenge of remembering the characters you've put in, the storyline, and how it all fits together. It has to have a natural flow to it, and it just interested me. It was a thing I used as a hobby, and when I got to the end I was super proud of myself."

But is it any good?

"Even if it's an absolute pile of rubbish, I don't care," he says. "I've got no illusions of getting it published or anything like that. It was just a hobby that I really enjoyed doing and it was just a little achievement. So much so now that I'm on to another one and I'm looking to develop that.

"My wife's too afraid to read it in case it's rubbish and she has to tell me. I also listen to podcasts, one with [author] James Patterson on writing a book. He says you need to give it to people you know are going to be honest. Because if you have any aspirations to get it published, it's a harsh world.

At least Foster is used to criticism.

Rangers could face Inter or Getafe