Square Roots is bringing more transparency to its produce

If you’re concerned about what you eat, there’s a good chance you’ve looked at the food in the supermarket, or in your fridge, and wondered where it actually comes from. Now urban farming incubator Square Roots is introducing a new way for you to check full history of the produce that you’re about to purchase.

To do so, you just scan the QR code or type in the lot number that the company says will be included in the packaging of all its produce moving forward. Either way, you’ll be taken to to what Square Roots calls a Transparency Timeline. You can actually try this out on the QR codes included in the announcement — the timelines show where and when the produce was planted, grown and harvested, and when it was delivered to the store.

To do this, Square Roots says it’s taking advantage of its indoor growing system, which involves refurbished, climate-controlled shipping containers, as well as “software that enables us to monitor and control every aspect of the process” — that’s supposed to help the farmers who are being trained at Square Roots, but apparently it gives the company data that it can package for consumers too. 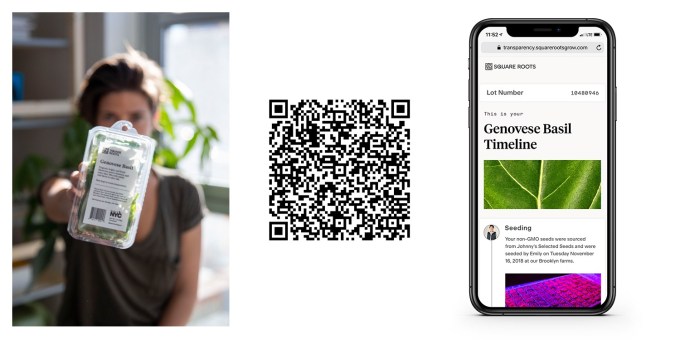 In the announcement, Kimbal Musk (who founded Square Roots with Tobias Peggs) laid out the reasoning behind the Transparency Timeline:

Consumers across the world are demanding greater transparency into where and how their food is grown?—?and with good reason. As mentioned above, this past Thanksgiving, another ecoli outbreak resulted in the recall of all romaine lettuce grown in the US. This was the third such outbreak in the last two years. It put millions of consumers at major risk of foodborne illnesses. The situation was compounded by opaque supply chains in the Industrial Food System, making it ridiculously difficult to accurately trace the source of guilty pathogens. To their credit, the big lettuce producers did eventually react, and agreed to start labeling their products with a mark of the state in which their products are grown. But that’s not enough. Consumers demand?—?and deserve?—?to know more.

Musk acknowledged that some companies are trying to use blockchain technology to introduce more transparency to the food supply chain, but he suggested that the results have been “underwhelming,” and that the solution is more straightforward: “What people want to know, simply, is where and how was my food grown and who grew it? With that information, they can make their own informed choices about whether to trust the food and whether to buy it.”

Square Roots produce is only sold in select New York City locations, so the rest of you probably won’t get a chance to try this out in your own supermarket anytime soon. But it sounds like Musk has expansion plans, and he said, “As we scale, we will keep building local farms in the same neighborhood as the consumers?—?so we can always own the supply chain end to end.”

SoftBank to invests in Grab
Next Item