Samsung unveils TV that can switch to vertical mode

How would you like to watch TV? Landscape or portrait?

Samsung has unveiled a TV that switches from a horizontal, landscape-style orientation to vertical - so it can easily display smartphone content.

The 43in device is called Sero and comes with an integrated easel-like stand upon which the screen pivots.

One TV analyst said it was an interesting concept - but might have limited applications.

Sero will come with a microphone and Samsung's virtual assistant Bixby built in. It can also be set up to display photographs, a clock face or other images.

Among the content users might choose to watch on it may be a new series of shows by Snapchat, designed for mobile consumption and set to be launched in May. 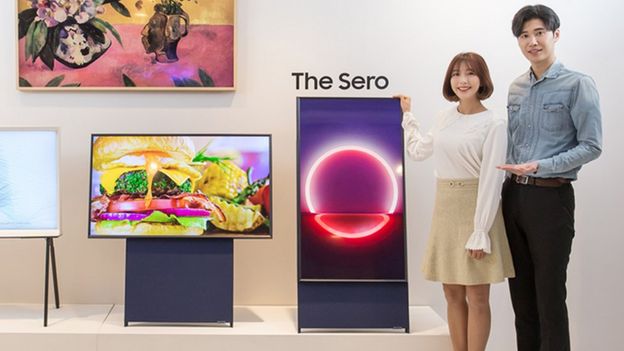 The Sero will initially be sold only in South Korea

It was an interesting design but faced challenges in the TV market, said Matthew Rubin at market research firm Futuresource.

"The use case for the Sero, beyond that of a regular landscape position TV, is limited, especially with a relatively high price tag," he said.

"It is telling that the TV will initially launch in South Korea, which is a market with very high mobile phone usage, so the likely success can be gauged quite early."

The South Korean tech giant is known for its sometimes experimental TV designs. In 2017, it showed off a TV with a wooden frame that is designed to display artwork and look more like a painting when not in use.

And earlier this year at the CES tech trade show in Las Vegas, the firm unveiled a 75in (190cm) television made of modular micro LED panels.

The BBC has asked Samsung whether the Sero is likely to be released outside South Korea and is awaiting a response.

SAIC to have several new EV models by 2025

Is your startup the next TikTok?