Drone owners to be charged annual fee under new proposals

Every drone and model aircraft owner in the UK could be charged £16.50 a year under plans by the aviation regulator.

The Civil Aviation Authority (CAA) is consulting on introducing a licence fee to cover the costs of operating the new drone registration scheme.

From November, drone owners would have to register their details on a database and drone flyers would complete a free online safety test.

But a drone membership organisation claimed the charge was "far too high".

The plans would affect anyone who owns a drone that weighs more than 250 grams (8oz).

Only those aged 18 would be able to register as the official drone owner. There would be no fee for "remote pilots" - those who fly the drones but are not registered owners.

The CAA has launched a consultation on the proposals, with a final decision expected by the regulator in July.

The number of drone users in the UK is unknown, but the CAA estimates 170,000 people will register. 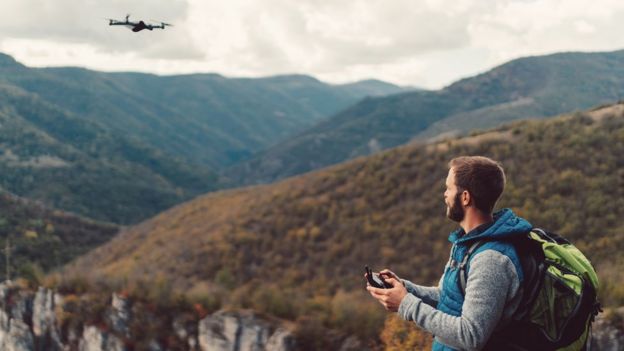 New EU rules will mean each member state will have to hold a national register of drone users from next year.

A similar registration scheme in France is free, in the US costs $5 (£3.84) and in Ireland costs €5 (£4.31). But the CAA says these schemes are part, or wholly, subsidised by the taxpayer.

The government has provided funding for the development costs of the new drone registration scheme, but the CAA said it would have to recover the expense of running, maintaining and updating it.

The regulator said it was keeping the charge "as low as possible" and that it may increase or decrease in future years, depending on the number who register.

But the FVP UK Association, which represents 4,000 flyers, said it "strongly opposes" the charge, which it said was "far too high".

"Criminals aren't going to register, so the safe and compliant people are the ones listed on the database," the group's chief executive, Simon Dale, said.

He added that the group would be calling on members to write to their MPs, the aviation minister and the CAA to oppose the plans.

Drone enthusiast Paul Jaggers, from Twickenham in west London, believes the cost of the licence is "extremely overpriced".

The 33-year-old, who runs a club in which members race around an indoor course, said the cost could put people off flying drones.

"If anything this fee will deter people. I think they are trying to make it not so popular because of the commercial opportunities.

"That air space is so valuable for the commercial drones, whether that's delivery, agriculture, or security, and it will be important for policing and any of the emergency services.

"By charging unjustifiable pricing they're trying to suppress it because otherwise it'll be chaos."

Under the CAA's plans, a single owner would be able to register multiple drones.

Four of the largest drone associations, which represent 40,000 users between them, are understood to be exploring whether they are able to act as the registered operator for all of their members' drones and model aircraft.

The FVP UK Association says the move could help prevent people from the quitting the hobby.

"This would seem to meet the government's requirements and it would give the advantage of increasing the number of insured flyers, too, as all of our members are covered under our public liability insurance," the group said.

How other licence fees compare

The Association of Remotely Piloted Aircraft Systems (Arpas UK), which represents the drone industry, welcomed the online safety tests for flyers and said it would consult members before responding to the proposals.

The proposals do not affect the CAA's existing charges for commercial operation permits.

A public consultation on the proposals closes on 7 June.