Apple has unveiled its iPhone 11 range of handsets, featuring more cameras and more battery life. But will it be enough to capture one of the world's only growing smartphone markets?

Samsung has traditionally held dominance in the Indian "premium smartphone" segment, which refers to mobiles that cost 40,000 rupees (£451; $558) or more.

But this year, for the first time ever, Apple surged ahead of the Korean electronics giant in India. It swept up 41.2% of the premium smartphone market in the second quarter of 2019, according to research firm International Data Corporation.

"The Indian smartphone market is a game of changing fortunes," technology journalist Mala Bhargava told the BBC. "There isn't a company, no matter how dominant a position it commands, that can afford to sit idle."

And the iPhone 11, Ms Bhargava added, is primed to find success in the Indian market.

In recent months, Apple dropped its price for the iPhone 11's predecessor, the iPhone XR, from 73,900 rupees to 53,900 rupees. The 20,000 rupee price drop was significant enough to make an impact.

"Consumers in India are known to be discount and deal-oriented," Ms Bhargava said. "Seeing the iPhone as an aspirational product, many snapped up the mobile once prices were slashed."

This, she said, is also what gave Apple the lead for the first time in India in the smartphone market.

The latest iPhones feature more cameras than before and a processor that has been updated to be faster while consuming less power. There are two Pro models, which the company said would last between four to five hours longer than their XS predecessors.

The entry-level iPhone 11 is the "perfect successor" to the iPhone XR, Ms Bhargava said.

It will start at a price of 64,900 rupees - which is not drastically higher than what the iPhone XR currently sells for.

"The discounted iPhone XR played a big part in bolstering sales in India, so its likely that with such a price for the iPhone 11, the company can really extend its market share," she added. 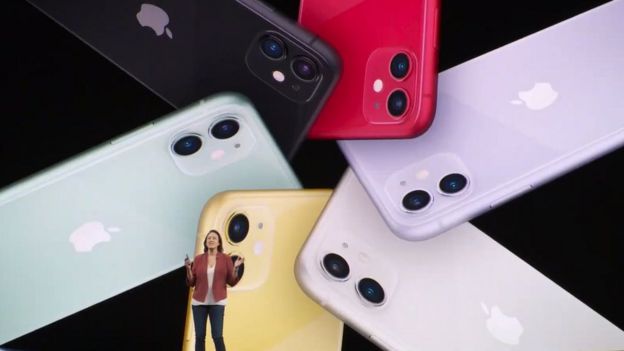 Apple also launched the iPhone 11 Pro and iPhone 11 Pro Max, which at 99,990 rupees and 109,900 rupees a piece, will not be a key attraction as consumers will find that unaffordable.

"But at the same time, this gap could still benefit the company, leaving the field open for older iPhones and for the new iPhone 11 to increase Apple's share in the country," Ms Bhargava said.

The company is still selling the iPhone XR, along with the older iPhone 8, which will give consumers more choices and prices to choose from.

"With the sales of smartphones falling in the rest of the world, Apple can't help but look to consolidate its position in India - it is almost the only market growing at an enthusiastic pace," she added.

In comparison, the premium global smartphone market collapsed 8% in the first quarter this year, with much of the decline pushed by a 20% drop in Apple's shipments.

"India still has millions of first-time phone buyers," said Ms Bhargava, "and many of those who have been using budget phones are read to buy something better."

Morgan has uni award named after him
Next Item