Ethiopian Airlines probe: What do we know?

Ethiopian Airlines flight 302 crashed on Sunday morning killing all 157 people on board.

It's led to a serious crisis for Boeing. The company manufactured the 737 Max 8 plane that was involved. The model has now been grounded globally as the pressure mounts in a search for answers.

Current estimates of the number of 737 Max 8 and 9s grounded ranges from 350 to 370. That represents a significant cost for airlines using the plane as routes, schedules and passengers are affected.

The race is on for investigators to find answers - and fast.

What do we know?

The flight data recorder (FDR) and cockpit voice recorder (CVR), or black boxes as they are often called, arrived in France on Thursday morning for inspection by the Bureau of Enquiry and Analysis for Civil Aviation Safety (BEA), the French version of the UK's Air Accident Investigation Branch.

Ethiopian inspectors chose to send the black boxes to France even though there are similar facilities in Nigeria, Dubai, Singapore, Germany and here in the UK at Farnborough.

But it is the country where the accident happens that makes the decision on where the black boxes go.

The BEA in France is a highly respected organisation with considerable expertise in this area.

In addition, part of the engines on the Boeing 737 Max 8 are manufactured by a French American conglomerate so this may have played a part.

How did they find the black boxes?

One of the biggest challenges in air accident investigation is locating the black boxes after a crash.

In modern aircraft, the black boxes are fitted at the back of the aircraft as history has shown that this area tends to sustain crash impact better.

In the instance of Ethiopian Airlines flight 302, the plane is reported to have hit the ground nose first at high speed. The rear of the aircraft was therefore closer to the surface which made it easier to find and retrieve the black boxes.

Now they've got the black boxes, what comes next?

Firstly, what state are they in?

Black boxes are engineered to withstand huge force in order to protect the all-important data chips inside. But the casing could be crushed which means soldering it open.

Connectors inside could also be damaged which means starting the analysis could be delayed further.

Once data chips are in hand, the information stored needs to be interpreted. 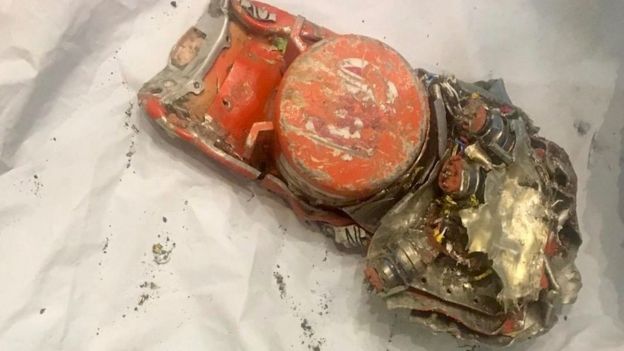 But the way that data is stored is not the same across the industry. Recording differs between specific aircraft models, operators and airlines.

For completely accurate data, conversion information held by Ethiopian Airlines will be necessary. It is hoped that conversion detail is readily available.

The last flight will be the prime focus but previous flights (over the 25 hour period of the recording) are also likely to be looked at to see if there were any anomalies.

What about the investigation in Ethiopia?

The investigation in Ethiopia will be led by an investigator from that country, but will be assisted by teams from around the world, all with an interest in the crash.

The US will have sent investigators from the National Transportation Safety Board, as the Boeing 737 Max-8 was manufactured there.

It is also thought French investigators are on site due to the black boxes making their way to France.

Three investigators from the UK arrived in Ethiopia on Tuesday to provide assistance, but plans are being made for them to return to the UK. 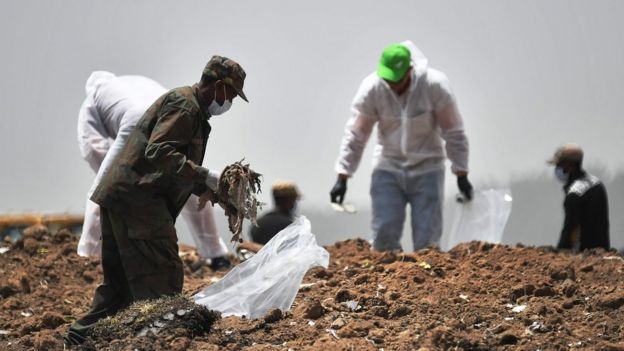 Investigators in Ethiopia are continuing to search for evidence

What are the investigators on the ground looking at?

How investigators work on the ground differs from country to country dependent on the lead investigator. But generally, separate teams will focus on different disciplines.

The investigation in the field is only the start of a very long process.

Once everything has been documented and photographed, and witnesses have been contacted, the wreckage is usually recovered and transported to a secure facility for extensive analysis.

Timing - what can we expect?

Work on the black boxes will begin in Paris on Friday.

The first image of a black box reveals the damage it sustained after the crash and subsequent explosion. 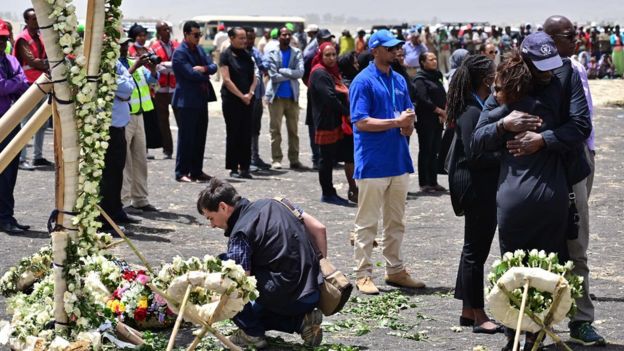 Bereaved families have been paying their respects at the crash site

When any data has been extracted, it will then be passed back to the lead investigator in Ethiopia, who will decide on the course of action and what information to release.

A former investigator told me that the team in Paris will work day and night because of the global interest in this crash and the impact it is having on airlines, passengers and, most importantly, the bereaved families.

Interest in the what happened with Ethiopia Airlines flight 302 has been heightened because of reported similarities with a Lion Air crash in Indonesia in October 2018. Both flights were using the Boeing 737 Max 8.

But it could be tomorrow, the weekend or next week before we start to get the first answers.

US sues Volkswagen over 'massive fraud'
Previous Item
NEXT

Total closes with 50 per cent
Next Item