Why US firms are desperate to retain ageing workers

Why US firms are desperate to retain ageing staff

When Roger Klug told his employer he was retiring, there was a shiver of panic among the bosses. Now 70 years old, Mr Klug is in his 47th year at Alexandria Industries, an aluminium company in rural Minnesota.

After almost five decades manufacturing industrial products for such diverse industries as solar power and defence, the company could ill-afford to lose Mr Klug's expertise.

Like a number of US states, Minnesota has a labour shortage - specifically a skills shortage - and seeing his valuable experience disappear overnight would have left Alexandria's management with big shoes to fill.

According to the US Department of Labor, since March 2018 US monthly job vacancies have outnumbered unemployed job seekers. As the baby boomers reach retirement, it seems there are not enough millennials in the jobs pipeline ready to step in.

"We have a labour shortage and it's going to be a problem for the next couple of decades as the boomers leave the workforce," says Mark Zandi, chief economist at Moody's Analytics.

So, one answer for companies struggling to find staff is to ask workers like Mr Klug to put off retirement. He did. 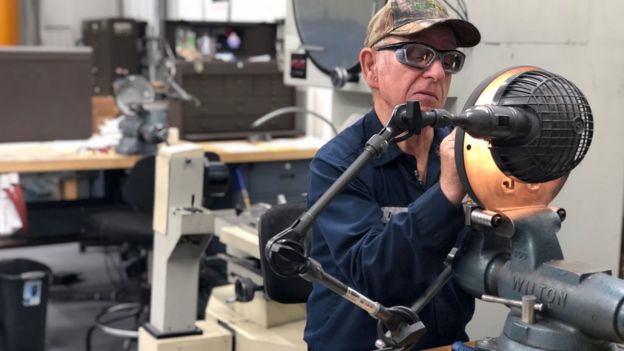 "I only work two days a week, and I wanted to do something after I retired and it was just a no-brainer to stay. It's not about the money. I enjoy the work," he says.

Mr Klug still turns out high precision parts at Alexandria, and also fills in on other jobs at the company when necessary. But a key role is to pass on his skills to a new generation of staff at the company. It's a trade-off that suits both sides. Mr Klug gets to stay active; Alexandria Industries gets valuable training for new workers.

It does mean, though, that companies have to incentivise their mature employees through flexible hours, healthcare benefits, and keeping wages competitive.

"Our biggest challenge is the ability to staff the organisation so we can grow the business," says Lynette Kluver, Alexandria Industry's director of organisational development. 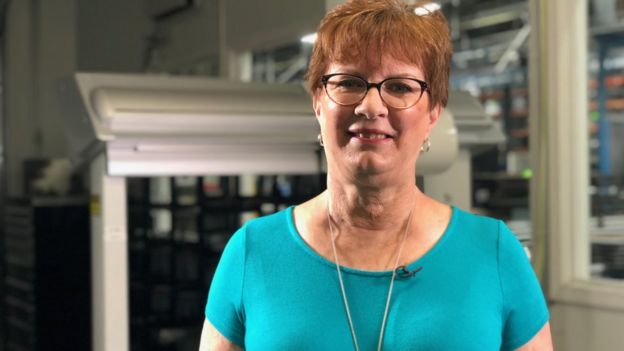 But it's not just the skills shortage that has extended the job prospects for ageing workers. Some employers seem to prefer them.

He has nothing but praise for the older workers, even running job adverts targeted at the baby boomer generation. For a start, Mr Johnson says, older employees are more reliable.

"They don't have kids to take care of or hectic social lives," he says. And his elderly new recruits bring with them valuable experience from other fields.

Johnson & Sons' oldest employee is Tom Slagerman, who does a variety of maintenance roles and helps wrap the flower bouquets. Aged 86, he used to own a print shop, but could not continue after suffering cancer.

Mr Slagerman said it took four to five years for him to feel well enough to return to work. His wife thought he was crazy for applying for a job at his age. But the work is fun and "keeps me active".

He and Mr Klug are far from unique. The US Bureau of Labor Statistics (BLS) estimates people aged 55 and older are expected to have the fastest growing labour force participation rate - that is, in work or actively seeking work - over the next five years. And within this age group, those aged 65 and above are expected to see the fastest expansion.

But despite the growth in opportunities for older workers, it's not just about "staying active" or companies' wanting to retain skills. Regardless of the expanding US economy, the reality is that many baby boomers who wish to retire simply cannot afford to. 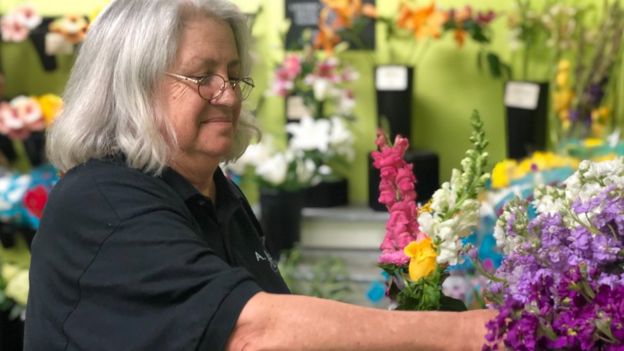 Like a lot of elderly people, Andreé Flageolle continues to work because she needs the mony

Andreé Flageolle, 74, another elderly Johnson & Sons employee loves the job, but admits that she's there because she needs the money.

Ms Flageolle, a nurse for many years, says her social security payment is enough to cover her rent, but leaves her little to pay for utilities and other monthly expenses.

She supplements her income with another part time job, at a company helping the elderly to remain independent and stay in their homes.

Still, the jobs are a labour of love, and Ms Flageolle particularly likes being around the younger workers at Johnson & Sons.

"I think that the mix really energises things and keeps you on your toes. Plus, I've found they teach me things, and I teach them. So, it's reciprocal," she said.

And that touches on another benefit of keeping elderly people in the workforce. "We know that multiple generations working together can lead to more creative thinking and innovation", says Cal Halvorsen, assistant professor at the Boston College School of Social Work.

But it's not just a benefit for companies and the wider economy, he says. Research shows that it's good for people personally - and that has got to be good for society in general.

Policy to stimulate growth before Cabinet
Previous Item
NEXT

"The law will get you"-President
Next Item