Large engineering and construction projects have changed beyond recognition in recent decades. Whether it is an airport, a power plant or a car manufacturing complex, sites are now much larger, more complex and more expensive, meaning more is at stake if things go wrong.

Analysis by Allianz Global Corporate & Specialty (AGCS) of more than 13,000 engineering insurance claims over the last five years has identified seven major trends in engineering and construction projects, driving some of the largest losses ever, according to a new report by the insurer. The report also examines how new technologies, such as drones, satellites, lasers, and computer modeling, are increasingly being used to speed up claims and mitigate risks:

Higher values bring bigger loss impact
Construction sites today are much larger than in the past and projects can run for many years. The expansion of the Al Maktoum International Airport in Dubai, for example, will not be completed until 2030 and is expected to cost around $36 billion. “As a result, sums insured are now much larger – projects with values of $5 billion to $10 billion are not unusual, meaning claims can be in the tens of millions of dollars,” says Raymond Hogendoorn, Global Head of Property and Engineering Claims at AGCS.  Flooding of the Hidroituango hydropower dam in Colombia in 2018 during construction is estimated to cost insurers around $1.4 billion, one of the largest engineering claims in history.

Fire/Explosion top cause of losses. Nat Cats most serious risk concern
Fire is the biggest cause of loss for engineering claims, accounting for over a quarter (27 percent) of losses by value, based on analysis of more than 13,000 claims around the world worth almost 8 billion euros ($8.8 billion). Fire has caused in excess of 2.1 billion euros ($2.35 billion) of insurance losses in five years. Natural catastrophes are another source of large claims. For example, storm damage is the second biggest cause of loss by number, accounting for one in 10 claims. Natural catastrophes also rank as the top concern for construction firms in the Allianz Risk Barometer 2019 1.
1 The Allianz Risk Barometer surveys more than 2,400 global risk experts about the major threats to their business.

Defective product and quality control losses on the rise
Defective products are the single biggest source of engineering claims by frequency, and the second largest by severity, according to AGCS claims analysis. There are almost three times as many defective products claims as storm claims, the next largest cause of claims by frequency. “We are seeing an increase in claims related to defects and quality control across the board,” says Martin Eckel, Senior General Adjuster at AGCS. For example, two major power generation claims — $200 million events — were caused by defective welding.

Greater supply chain complexity increasing size and cost of claims
In the past, an airport or a power plant would most likely have been built by a national contractor using local suppliers. Today, it is more likely to involve multiple parties with machinery, equipment and other components sourced and transported from around the world. “Technology is becoming more sophisticated and specialized, which can increase the costs to repair or replace machinery and equipment. If a turbine coming from China is damaged in transport, it might take as long as 18 months for a repair,” says Eckel. 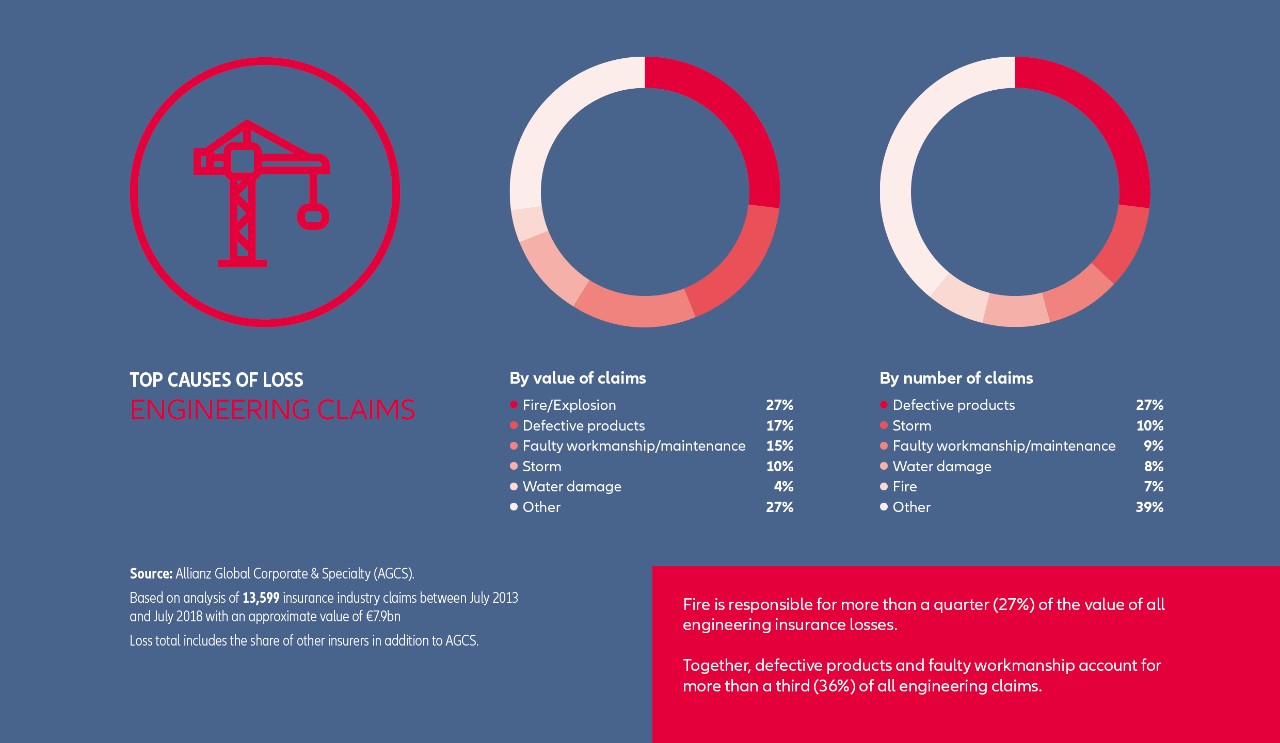 Political risk and sanctions a growing concern for long-term projects
Large construction projects can take as long as five to 10 years to complete and involve contractors and suppliers from around the world, making them vulnerable to sanctions and trade disputes. For example, sudden and large increases in U.S. import tariffs can add millions of dollars to claims for plant equipment and machinery imported from countries such as China.

Growth of renewable energy projects brings challenges as well as benefits
As the demand for green energy has increased, solar and wind projects have become larger, the locations more remote and wind turbines much bigger – with blades as long as a football pitch. In 2018 alone, there were 409 new offshore wind turbines across 18 projects in the EU. Offshore wind can be a particularly challenging area for claims, as turbines can be difficult to access.
Increasing roles of drones and new technology in risk and claims assessment

As large engineering and construction projects have become more complex, assessing risks and claims and establishing the ultimate cause of loss has become much more difficult. However, insurers have an increasing array of new technology at their disposal to offer support:

AGCS recently utilized drones, laser scanning, and computer modeling to determine the root cause of a machinery explosion at an inaccessible site. Drones and satellite imagery were also used to assess engineering claims after record wildfires in California and Hurricane Florence in 2018.
AGCS is coupling 3D topographical data from drones with hydrogeological modeling software and rainfall simulation data to predict flash flooding risk on construction sites.
Satellite technology offers high resolution images of a site within 24 hours of a loss, even at remote or hazardous locations. It can also be used to combat exaggerated or fraudulent claims.

“Technology will create more certainty for engineering claims,” says Hogendoorn. “There are so many parties on a site at one time, and so many activities happening simultaneously, it can be extremely difficult to understand the sequence of a loss event. However, we can increasingly use technology to access data and information to better understand the root cause of loss and speed up the claims process.”
About Allianz Global Corporate & Specialty

Our customers are as diverse as business can be, ranging from Fortune Global 500 companies to small businesses, and private individuals. Among them are not only the world’s largest consumer brands, tech companies and the global aviation and shipping industry, but also wineries, satellite operators or Hollywood film productions. They all look to AGCS for smart answers to their largest and most complex risks in a dynamic, multinational business environment and trust us to deliver an outstanding claims experience.

Worldwide, AGCS operates with its own teams in 34 countries and through the Allianz Group network and partners in over 200 countries and territories, employing over 4,400 people. As one of the largest Property-Casualty units of Allianz Group, we are backed by strong and stable financial ratings. In 2018, AGCS generated a total of 8.2 billion euros gross premium globally.
About Allianz

The Allianz Group is one of the world's leading insurers and asset managers with more than 92 million retail and corporate customers. Allianz customers benefit from a broad range of personal and corporate insurance services, ranging from property, life and health insurance to assistance services to credit insurance and global business insurance. Allianz is one of the world’s largest investors, managing around 673 billion euros on behalf of its insurance customers. Furthermore our asset managers PIMCO and Allianz Global Investors manage more than 1.4 trillion euros of third-party assets. Thanks to our systematic integration of ecological and social criteria in our business processes and investment decisions, we hold the leading position for insurers in the Dow Jones Sustainability Index. In 2018, over 142,000 employees in more than 70 countries achieved total revenues of 131 billion euros and an operating profit of 11.5 billion euros for the group.

The Head of Business Development at Allianz Insurance Ghana, Mr William Annor Adu has called on the private sector to support the government's strategies to help curb the spread of the novel coronavirus in the country. He said busines…
24-04-2020

Allianz Life Insurance has announced free life insurance cover worth GHS8.44 million to medical professionals in three hospitals in the country who may come into direct contact with people infected with the highly infectious deadly COVID-1…
26-03-2020

Effects of redundancy in the UK

How are sectors re-imaging themselves?

Global Is The New Local For Businesses
Previous Item
NEXT