Billionaire David Koch, a major donor to the Republican party, has died aged 79, according to family sources.

The former majority owner of Koch Industries was ranked by Forbes below brother Charles as the 11th richest person in the world.

The native of Wichita, Kansas, ran for president as a Libertarian in 1980, calling for the abolishment of several federal government agencies.

The brothers had a huge influence on the conservative movement.

Their push for small government and a free economy made them both famous and controversial.

They fell out with President Donald Trump over his trade tariff policy.

He had been a major donor to the arts, especially ballet, and donated to New York's Lincoln Center and Memorial Sloan Kettering Cancer Center hospital. 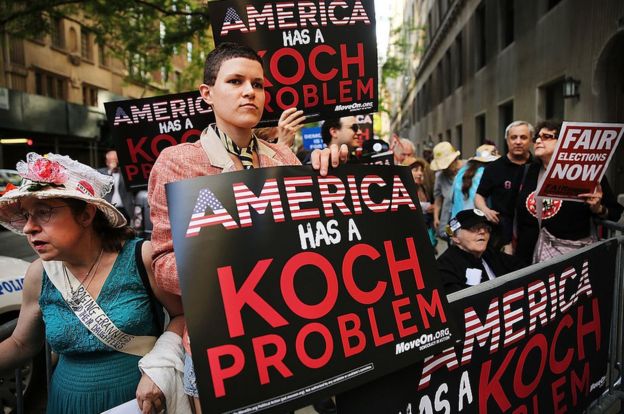 The Koch brothers are despised among liberal Americans

Who are the Koch brothers?

The company founded by Charles and David Koch - the second largest privately owned business in the US - has interests ranging from pipelines to paper towels.

According to the Koch Industries website, they have more than 120,000 employees between all their businesses and subsidiaries.

They have previously put money into groups denying climate change and attacking unions and workers' rights.

But they have also pushed for criminal justice reform and made large donations to the American Civil Liberties Union.

US to support agriculture sector