The future of food: Why farming is moving indoors

A car park opposite the infamous New York City housing estate where rapper Jay-Z grew up seems an unlikely place for an agricultural revolution.

Ten shipping containers dominate a corner of the Brooklyn parking area, each full of climate control tech, growing herbs that are distributed to local stores on bicycles. This is urban farming at its most literal.

The containers are owned by Square Roots, part of America's fast-expanding vertical farming industry, a sector run by many tech entrepreneurs who believe food production is ripe for disruption.

"Rather than ship food across the world, we ship the climate data and feed it into our operating system," says co-founder Tobias Peggs.

He says the deal represents everything about indoor farming's potential: locally grown, quick-to-market, fresh produce that can be harvested year-round and is free of pesticides and not affected by harsh weather. 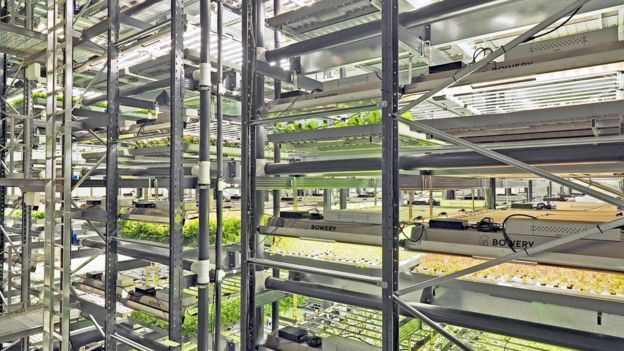 Bowery is set to open its third industrial-sized indoor farm

"Indoor farming can answer many of the questions being asked by today's consumers about the provenance, sustainability and health of the food they eat," he says.

Jeffrey Landau, director of business development at Agritecture Consulting estimates the global value of the vertical farming market will rise to about $6.4bn by 2023, from $403m in 2013, with almost half that attributed to growth in the US.

Despite the sector's high costs and limited food range, the potential is not lost on investors. Recently, AeroFarms, a producer of lettuce and other leafy greens, raised $100m, including from Ingka Group, Ikea's parent company. Bowery Farming raised $95m in a 2018 funding round backed by Google Ventures and Uber boss Dara Khosrowshahi, bringing its total funding to $122.5m.

Plenty, another major US player, raised funds from Softbank chief executive Masayoshi Son and former Google head Eric Schmidt. The company has ambitions to build hundreds of vertical farms in China. In the UK, food delivery and robotics company Ocado is investing in indoor farming.

But there have also been failures. "Vertical farms are a highly intensive capital expenditure," says Mr Landau. "Your lighting system will be one of your highest capital costs." And then there's ventilation, air conditioning, irrigation and harvesting. "Make a mistake and you will have one costly upgrade on the horizon," he adds. 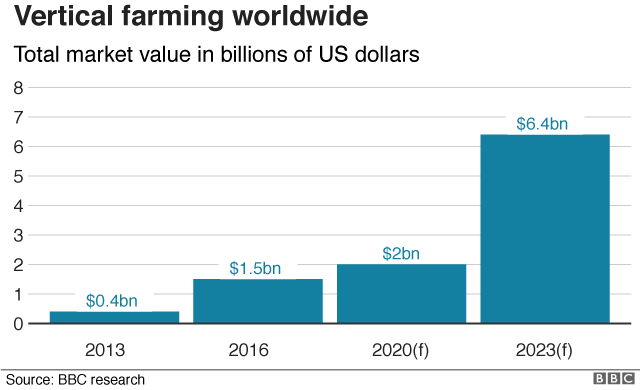 Mr Peggs chose a modular system based around shipping containers because he says it is quickly scalable according to demand. "We can put a herb farm in new city for less than $500,000 and be growing within two months. We just press the 'basil button' - or mint, or tarragon - and the box configures itself to grow in optimum climate conditions."

In neighbouring New Jersey, however, Bowery Farming, takes a different approach. The five-year-old company runs industrial-sized farms. Outside one huge, grey windowless warehouse a heat haze shimmers off the concrete. It's a sharp contrast to the chilly interior where an aroma of fresh farm produce hits you immediately.

Produce is grown on trays stacked ceiling-high to maximise acreage. Everything from the automatic seeding machine to harvesting is run by Bowery's proprietary operating system (OS) which controls light, adjusts water nutrients and takes camera images of each plant to monitor its health.

"The OS is our central nervous system. There are millions of data points," says founder Irving Fain. "The artificial intelligence is constantly learning and predicting how to produce the best quality product." 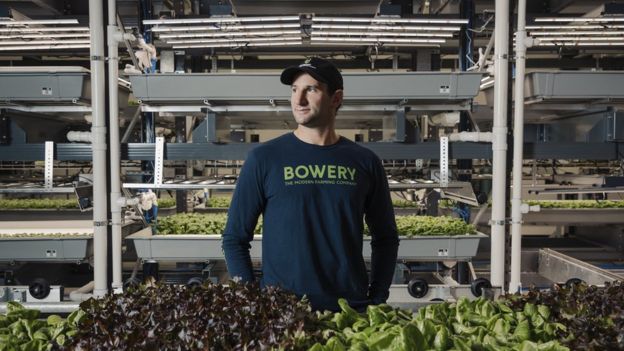 Running the farm manually would be difficult, he says. Staff operate things from computer screens and iPads. In the cavernous farm room itself, the only sound is robots moving the shelves.

Growing food indoors has been around for decades, but the industry got a kick-start from advances in the performance of lower cost LED lighting. Combine that with robotics, innovations and AI, and you have an industry that Mr Fain says is both viable and scalable.

"The big question was, how can we grow in large volumes at a consistently high quality? Suddenly, the economics changed," he says. "We can grow 365 days a year - a major departure from thousands of years of agriculture. Unlike outdoor farming, our yield is virtually 100% guaranteed."

Vertical farmers talk with a zeal you'd expect of entrepreneurs with tech world backgrounds. With population growth and climate change putting pressure on food production, they think they may have answers. 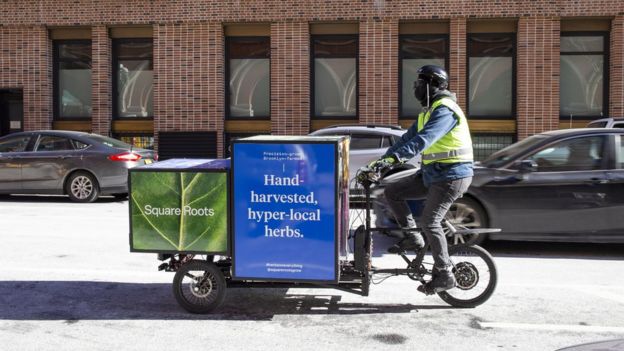 Square Roots' herbs are delivered to customers by bike

But this highlights one of the industry's limitations. You can't feed the world on leafy greens. That said, for Mr Fain, if Bowery only ever grew lettuce or kale, "it's still a win". But his ambitions are greater. Bowery is growing radishes and turnips that he expects to come to market over the coming years.

Square Roots hopes to soon start commercial production of beetroots and strawberries, and is experimenting with so-called heirloom produce from rare and long-forgotten seeds.

Mr Peggs says: "It makes sense to grow perishable produce in the same neighbourhood as the consumer - stuff that doesn't travel well. A lot of produce - tomatoes, strawberries - are grown for travel, not for taste. It doesn't make sense to vertically farm food with a long shelf life."

But different produce presents different challenges, says Mr Landau. Where plants are concerned, not all light is created equal. Fruiting and flowering crops such as tomatoes, strawberries and peppers have different needs. 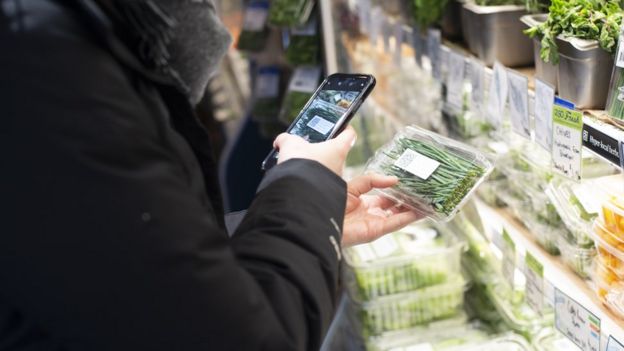 "Lights for these types of crops will generally be more expensive, require more electricity, and produce more heat, meaning additional cooling," says Mr Landau. "Harvesting these crops can be a significant operational cost."

But it is being done. In the US, Oishii vertically farms the much-prized Japanese Omakase strawberry year-round. And Farm One produces more than 200 products, including 34 edible flowers. Plenty is experimenting with watermelons. As technology costs fall and R&D intensifies, the crop variety will expand.

That may also ease criticism of the industry's carbon footprint. In the artificial light versus sunlight debate, the latter often has the upper hand. But, then, indoor farmers point to the transportation costs and waste in traditional agriculture.

For the moment, Mr Landau says, the carbon footprint concerns are valid, although he expects indoor farms to increasingly draw on renewable energy.

"And when you look at markets located in extreme climate environments or island nations where they import a majority of food, indoor farming could be a viable option," he says.

Mr Peggs stresses that industry is still young are trying to work out the right business models and direction. The entrepreneurs don't agree on everything, though they certainly agree on this: vertical farming has the potential to transform global food production as we know it.

Economy likely to reaccelerate this year

A glimpse into the future by Vodafone
Next Item