Mourners hugged in front of the synagogue on Thursday

The head of the Central Council of Jews said it was "scandalous" that police were not protecting the synagogue in Halle on the Jewish Yom Kippur holiday.

The German police union (GdP) said police were too thinly spread for 24-hour protection of places of worship.

The suspected gunman, named only as Stephan B, was arrested.

About 2,200 people watched a live stream he allegedly posted on the internet gaming platform Twitch.

"If police had been stationed outside the synagogue, then this man could have been disarmed before he could attack the others," said the council's president Josef Schuster on Deutschlandfunk public radio.

In a tweet, Mr Schuster added that it was "a miracle that there were no further casualties" during the incident at the city's synagogue. About 60 worshippers were at a Yom Kippur service at the time.

German authorities say the suspect is a German national. 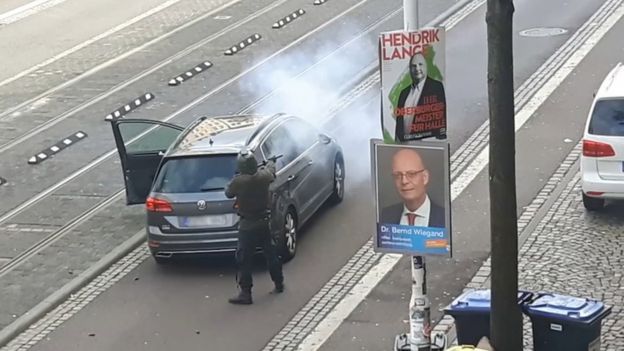 The video - which has been removed from Twitch - showed him making anti-Semitic and misogynistic comments to camera before driving to the synagogue and shooting at its door.

After failing to get into the synagogue, he shot dead two people: a woman in a nearby street and a man hit by shots fired into a kebab shop about 500 metres (yards) away. Two people were also wounded by bullets and underwent surgery.

Reports say the gunman also tried to set off explosives at the synagogue.

Witnesses said he was heavily armed, and an online anti-Semitic "manifesto" attributed to him shows guns, apparently home-made.

Survivors say they hid behind the synagogue's heavy locked doors until police arrived, which took more than 10 minutes.

"This case shows us how thinly spread the police cover is," Oliver Malchow, chairman of the GdP, told German broadcaster ZDF.

"While we're tackling terrorism we cannot at the same time involve many staff in monitoring far-right extremists," he added. "We didn't underestimate it, but we can't foresee everything and prevent it."

Authorities have noted a recent rise of anti-Semitic incidents in Germany, a country that is still haunted by the murder of six million Jews under Nazi rule.

In Germany, government authorities provide varying degrees of protection to synagogues. But when this is not possible, local Jewish communities sometimes work with law enforcement to provide for their own security.

Police presence has been increased outside synagogues in several east German cities, including Leipzig and Dresden, according to local media.

The attack has been condemned by European leaders, including German Chancellor Angela Merkel.

Israeli Prime Minister Benjamin Netanyahu also described the shooting as a "terror attack" and warned anti-Semitism was on the rise in Europe.

Tanzanian comedian out on bail