Why people use bots to buy limited edition trainers

Getting your hands on the latest pair of trainers can be hard, and some people are now turning to technology in an attempt to jump the queue.

Mention the word "bot" to sneakerheads and you'll probably be met with a quiet anger. That's because automated programmes are increasingly being used to help people get hold of the latest limited edition kicks.

Popular brands, such as Nike and Adidas, regularly release trainers with celebrity or designer collaborations, often in relatively small numbers and to widespread anticipation.

Buying the latest pair of "hype" trainers can also be lucrative. The right design can be sold for huge mark-ups on secondary sale sites. That's because getting hold of them is often no easy task.

A few years ago, thousands of people used to descend on a high street shop on big release days, often resulting in scuffles and trouble. But these days sneakerheads have to sign up to apps, be on mailing lists and scour the internet for titbits of information to discover when their desired shoe will hit the market.

Even then, trainer fans are sometimes entered into a raffle by retailers, via social media. In some cases buyers have to prove their fandom with pictures in their favourite pairs. And only then will the winners be allowed into the actual shop. Once there, you'd better hope your size hasn't sold out before you get to the counter.

To bypass all this, some have turned to computer software to buy trainers online. The right bot can be bought off the internet for as little as £20.

They can then can be programmed with a name, address and bank details, so that as soon as that much-anticipated drop is announced, fans can hit go and the programme will head to the retailers' systems, often bypassing their security, and buy those sought after trainers.

Without an app you could be stuck in a queue on the website, hitting refresh over and over again. 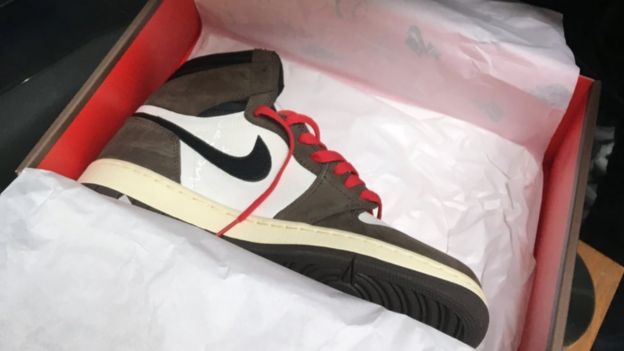 "Mark", not his real name, says using bots is a "dirty shoe secret". He admitted using one to get his hands on a pair of Jordan 5 trainers after failing to get hold them in the shop.

The 31-year-old from Manchester - who does not want to be named for fear of being blacklisted - said he had signed up for updates about the trainer's release.

"On the Thursday night everyone got an email to say the trainers were going to be dropping in store on the Friday. As soon as I got that email, it was straight online, booked my Megabus ticket down to London."

Through the night, more and more people started turning up and the atmosphere changed. He said things started to get aggressive when people began queue jumping.

He's not alone. The Travis Scott Air Jordan 1 Hi OG trainers was dubbed the "trainer of the season" by some. Fans could buy a pair in the shops for around £140.

However, the BBC found some for sale at the trainer convention, Crepe City, in London, with a price tag of £1,400. You can find them online for upwards of £2,500.

And getting a bot isn't difficult. The internet is littered with ones specifically designed to help people get the trainers they want. You can buy a bot that works for one retailer on Apple's app store for just £20. 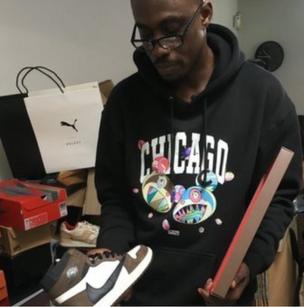 Franklin Boateng, otherwise known as "The King of Trainers"

"It is a big problem," says Franklin Boateng, known as "the King of Trainers" because of his collection. He has been collecting trainers for around 20 years but says the big brands have now cottoned on to the practice. He says there is a big market for resale in Asia.

"They haven't got as many of the actual retailers. Some people will buy some women's sizes here. It could be an Adidas Yeezee and they know that a lot of people in Asia will pay a lot of money for it - probably double or triple the amount they would pay in the UK."

George Sullivan runs The Sole Supplier, a website dedicated to discussing all things trainers. "Generally, resellers will get banned from retailers, if they're known, because the brands just don't like it," he says.

"They want people to be able to wear their shoes. It's just like people reselling tickets for concerts. It's not fair." 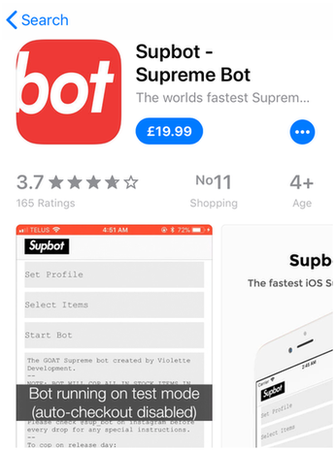 Bots can be bought online for less than £20

He says teenagers as young as 13 with coding knowledge are the ones behind some of the most sophisticated bots on the market.

One sophisticated bot was recently being sold for about £1,500 because it was so good at buying shoes. He said the buzz around the release of the bot reminded him of the release of a rare pair of shoes.

"There was a limited release of it and people were reselling the bot because it was so successful."

Reebok says it is trying to block bots to be able to give fans a fair chance of getting their hands on their trainers. The firm said it was an "ever-changing landscape" and resellers were "constantly finding new methods of beating the system".

It said it had a "dedicated team tasked with ensuring our technology is as bulletproof as possible".

Meanwhile, Adidas said: "We will often limit purchases to one pair per consumer to allow each fan an equal and fair chance to get hold of limited edition designs."

Nike did not respond to our request for a statement, while Asics said it does not have an official comment at this stage. 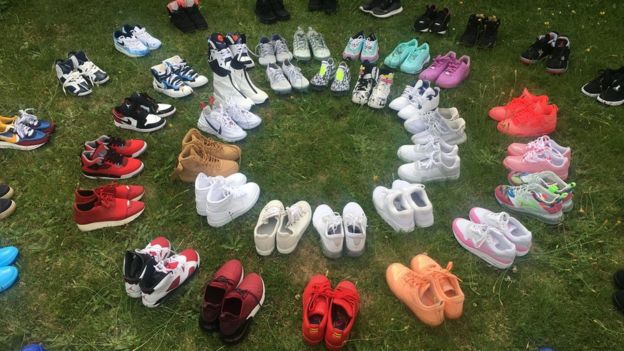 Trainer manufacturers say they have dedicated teams to tackle the issue

However, Mark says the resale side has kicked up a notch. He says he knows more than a dozen 18-year-olds who are using bots to buy and resell trainers. Most do it to bump up their spending money.

"If they know there's a hype behind the shoe, it doesn't matter how ugly it is or how rare it is, as long as there is a hype, they will go for it.

"It could also be a jacket, or a watch, it could be jumpers and hoodies. As long as there's a market for it, and they know there's going to be a profit in it, they'll go after it."

Effect of Covid-19 on economy grim but

6 things booming due to covid-19

Business as Usual at Hytera’s Center