GOIL Ghana Limited, one of the leading Oil Marketing companies (OMCs) in the country, has now made available its high performance petrol (RON?95) to all its fuel pumps in the southern part of the country.

The introduction of the high grade product forms part of the company’s effort to eliminate the harmful effects of leaded fuels on the health of humans and the environment.

Petrol consumers will also now have unlimited access to the high grade fuel at no extra cost.

The new grade fuel is also expected to ensure that the performance of vehicles is improved, while helping drivers to make some savings on the consumption of petrol.

Briefing the media yesterday at the GOIL station at Burma Camp in Accra, the Head of Fuels Marketing at GOIL, Mr Marcus Deo Dake, said the company had over the years taken bold initiatives to ensure that it provided the best of fuels for its consumers.

“We care about our customers and the environment and that is why we continue to ensure that we sacrifice more for consumers”, he said while explaining the rationale for the instruction of the unleaded petrol at the same cost as the regular petrol sold on the market.

Mr Doe asked consumers to be wary of what they bought on the market to prevent some unscrupulous persons from deceiving them.

He said the high grade fuel, which is also known as unleaded fuel, is green in colour as compared to the low grade one which is red.

Mr Doe said because the price of the product is same as the lower grade, it will be virtually impossible for any station owner to sell something different.

“This is why I want to entreat motorists to patronise our stations because we will serve them the high grade fuel at no extra cost to them”, he assured. 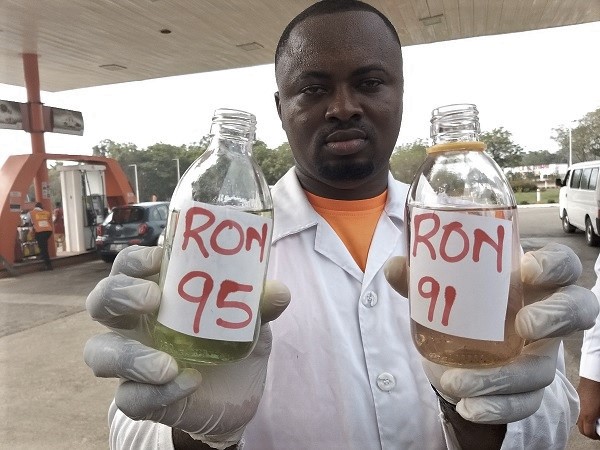 A pump attendant displaying  the two grades of the petrol

The Executive Secretary of the Chamber of Petroleum Consumers (COPEC), Ghana, Mr Duncan Amoah, who was on sight with a team of media personnel to randomly check on some GOIL stations to ascertain the availability of the new high grade petrol at GOIL stations described the move by the company as bold and welcoming.

He said as consumers, the introduction of the high grade petrol at a cost that can meet the pockets of the entire motoring public was long overdue and expressed appreciation to GOIL for introducing the product in more than 300 stations in the southern part of the country.

He expressed the hope that soon, GOIL will allow consumers in the northern part of the country to also benefit for the initiative.

Mr Amoah said lead in fuels has an impact on human health and the environment and ,therefore, the introduction of more unleaded petrol, the most highly consumed fuels in the country will go a long way to improve the health of people who come into contact with the product.

Bold attempt to save the economy

Women in Poultry to attract youth