Business activity in the US service sector fell last month for the first time since 2013, hurt by the coronavirus, according to a survey.

The drop came amid a "notable worsening" in the services sector, which includes finance and retail, the IHS Markit research firm reported.

New orders received by private sector firms also declined for the first time since 2009, it said.

The latest IHS Markit/CIPS purchasing managers' index data found that services business activity fell to 49.4, from 53.4 in January, while manufacturing output slowed to 50.8, compared to 51.9 in January, a six-month low.

The report added to fears spurred by recent trends in the bond markets, which suggest investors see the risks of holding short and long-term government debt as increasingly similar. That comparison is often tracked as an indicator of possible recession.

The blue chip Dow Jones Industrial Average fell about 0.7%, while the S&P 500 dropped about 0.9% and the tech-heavy Nasdaq was more than 1% lower.

Investors also turned to US government debt, considered a less risky investment, driving the prices up and yields on bonds down.

The IHS survey found that manufacturing output was hurt by delivery delays from China, while services industries such as travel also took a hit.

Executives also reported spending more cautiously, amid questions about the upcoming presidential election and worries about the possibility of a wider economic slowdown.

The survey found a modest rise in business confidence, suggesting that executives are hopeful the slowdown will prove short-lived. But the rate of contraction last month was still severe, said Chris Williamson, chief business economist at IHS.

"With the exception of the government shutdown of 2013, US business activity contracted for the first time since the global financial crisis in February," he said. 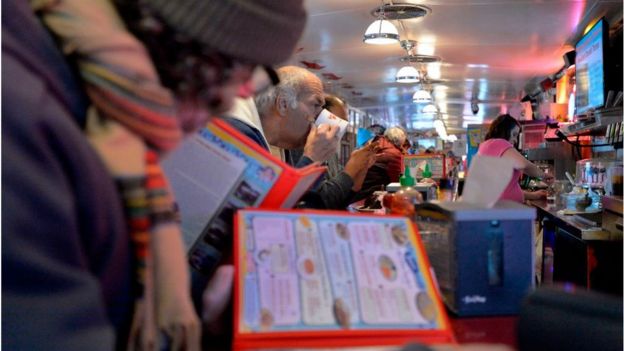 In recent weeks, companies around the world, including Apple, sportswear firms, airlines and carmakers, have reported slowdowns.

But analysts have said that the US - where consumer spending drives much of the economy - should be relatively insulated from the effects, assuming the coronavirus outbreak wanes relatively soon.

US jobs growth beat expectations last month, while the overall economy is growing at about 2.1%, according to the most recent government figures.

However, traders are also now anticipating the Federal Reserve will move to cut interest rates further this year, although the head of the central bank said at its most recent meeting that it did not think the economy needed additional help.

The IHS Purchasing Managers Index (PMI) report will raise fears about the country's underlying economic health, said Michael Pearce, senior US economist at Capital Economics, adding that the contraction in the service sector - which includes industries like healthcare - was especially alarming.

However, he added: "We have a hard time believing the apparent message...that the economy is on the brink of a recession.

"Unless job creation and consumer confidence suddenly craters, it's difficult to see how the new downside risks that have emerged in recent months would be enough to sink the entire economy."

How will London's economy look

AfDB calls for strengthening of value chains
Next Item