Coronavirus: Six things that are booming in sales

As the coronavirus pandemic rages on, many retailers are seeing trade collapse, but others are overwhelmed by demand.

"We're as busy as at Christmas time," says the owner of an online coffee business, "we're selling double."

An outdoor games supplier is in the same position: "We've sold out of table tennis tables - they're the new loo roll."

While families are stuck at home, they’re keen to find ways of keeping their minds and bodies active, well-fed and refreshed, as their purchasing choices reveal.

Whether for exercise or for a safer means of travel, bicycle sales are speeding up.

"People are thinking, I want to have independence," says Will Butler-Adams, chief executive of the folding bike company, Brompton.

"I think sales in the UK across the industry are probably up around 15%."

Meanwhile, the London Cycle Workshop is twice as busy as normal, servicing older bikes for customers trying to avoid public transport or "just looking for something to do".

Retailer Halfords is also reporting a rise in sales of exercise bikes, saying: “People who are not able to get out still want to exercise indoors.”

Toby Clark, from Mintel market research, says his teams are seeing reports of “really high sales of home exercise equipment, as people try to compensate for the fact that they now can't get to the gym".

John Lewis backs that up. The department store has seen a "significant uplift" in home gym equipment and other fitness products. 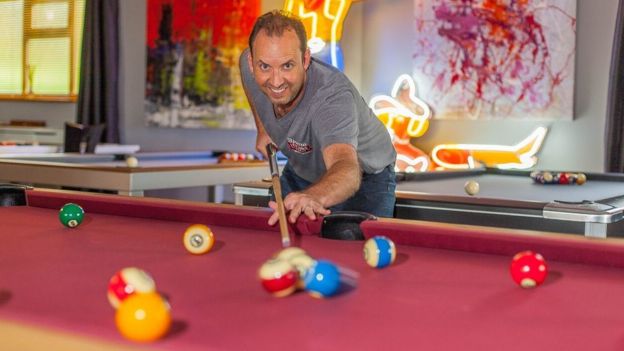 There has been a surge in demand for indoor games

Games supplier Andy Beresford says his entire stock of outdoor table tennis tables is sold and a delivery due this week is pre-sold.

Orders took off when the government said schools would have to close.

Andy, whose business Home Leisure Direct is based just outside Bristol, has sold an "awful lot" of pool tables as well.

Phil Jones of JustSeed in Wrexham, which sells a wide range of plant seeds, says he had to stop taking orders after a rush for staples including carrots, lettuce, beans and tomatoes.

"It's just the sheer volume," he says, "We're catching up with a massive surge."

Two of the biggest seed companies, Marshalls and Suttons, have stopped answering the phone.

For some buyers, there is a worry about fresh vegetables running short, but Phil says many are just looking for an activity.

"They've been meaning to do the veg patch for years and it's something educational to do with the kids," he adds.

Another specialist retailer, Franchi Seeds, has taken down its website temporarily, saying "people are panic buying". 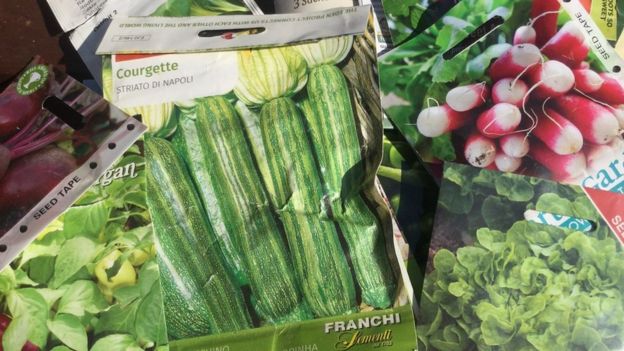 Indoors, more people are taking up sewing and knitting as a way to beat the boredom of confinement.

London-based department store Liberty says sales of sewing accessories are currently up 380% on last year, while purchases of their craft kits have risen 228%.

Another pursuit that’s popular with people who have time on their hands right now is settling down with a good book. And perhaps surprisingly, fictional accounts of epidemics are in great demand.

At number two in Amazon UK’s chart of most sold books of the week is The Eyes of Darkness by Dean Koontz. Although it was written in 1981, it describes a virus called Wuhan-400, in what appears to be an uncanny prediction of the coronavirus.

Another novel that is selling well is The Plague by French author Albert Camus. UK publisher Penguin says its sales in the last week of February were 150% up on last year and it is reprinting the book. Its sales have also risen sharply in France and Italy.

As supermarket bosses have been telling us, there is collectively £1bn more worth of food in our houses than before the stockpiling rush started.

But where does it all go? You have to have somewhere to store it.

As a result, freezers and fridges have zoomed up the list of products people are searching for on online marketplaces.

There is a rush for laptops as well, also for office equipment, because many are finding that slouching on the sofa is not the best way to work. 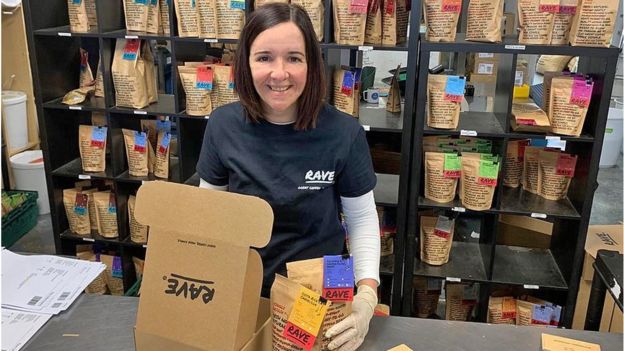 Rave Coffee, selling exotic coffees from an industrial unit in Cirencester, is having to take on more staff to cope because demand has doubled.

"We have 11 members of staff and need another five," says Vikki Hodge, who runs the business.

"People were buying our coffee for their office supply, now they are getting it at home," Vikki explains.

"Where I had one office ordering, I might get 10 people ordering from their living room."

But even the businesses doing well in the crisis remain in danger.

Andy from Home Leisure Direct says he has stopped taking orders for table tennis tables after factories closed in France, Spain and Italy.

"I think we'll go into lockdown before the end of the week," he says, "I'll mothball the business."

Andy has 40 staff, many of whom will have no work to do, so he is planning to apply for government funding to help with the wages.

Vikki from Rave Coffee is acutely aware that the businesses surrounding her on her industrial park in Cirencester are having to shut down.

"I can see the worry on their faces. They are small businesses struggling," she says.

"We will pay our VAT and PAYE on time," Vikki adds, "It goes in the pot to help them."

COVID: How are food supply networks coping
Next Item