"There are no words that can adequately describe how deeply this crisis is impacting aviation." So said the boss of the International Air Transport Association (IATA).

Where Alexandre de Juniac could find words, he wasn't mincing them, and he also had numbers.

Between April and June, "some $61bn could disappear from cash reserves. Demand is in free-fall. Worldwide, it's down 70% compared to last year: 90% in Europe. And it could get even worse".

The industry reckons 65 million jobs are linked to aviation: "Our estimation is that some 25 million people's jobs are at risk until the aviation sector is functioning again," he continued, in a briefing on Tuesday. "Twenty-five million people is equal to the entire population of Australia. It is equal to the entire labour force of Italy. The scale of the economic impact is enormous."

You won't be surprised to learn he was looking for bailout from governments - lots of bailouts from lots of governments: direct financial support, loans, loan guarantees, support for corporate bonds, tax relief, deferred air traffic control costs, at which Eurocontrol helped out on Tuesday. 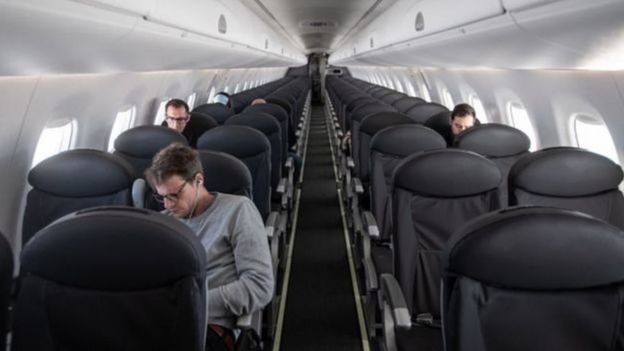 It is estimated that at least 8,500 aircraft are currently parked. Only around quarter of the global capacity is in operation. That's not only a lot of asset value, and leasehold bills, sitting doing nothing. Mechanically, planes don't like being idle either. It's good for them to keep moving.

If airlines can get through the cash crisis, the next question is how to get going again. And the IATA boss doesn't want to leave that to chance: "We do not expect to re-open this same industry we closed a few weeks ago."

It will require co-ordination with regulators, for licensing and air worthiness certificates. It will also need co-ordination with health authorities around the world, who will want to shut down the risk of re-infection. The authorities have been notable for the failure to co-ordinate so far, and it looks like airlines that have to deal with the consequences of that continuing as travel opens up again.

Lufthansa doesn't want to leave things to chance either. The German flag-carrier followed up on Tuesday with an announcement that it has made a bold move to cut capacity permanently. It also believes aviation will not return to the way it was, as little as three months ago. More than 40 of its aircraft, most notably the big 380s and the old, polluting 7474s, are being retired or sold off. Its subsidiaries, Austrian, Swiss and Brussels Airways, are doing likewise.

"It will take several months until the global travel restrictions are completely lifted and years until the worldwide demand for air travel returns to pre-crisis levels," is the insight from Frankfurt.

It is informed partly by the growing pressure to reduce emissions from aviation, allied to a growing, youth-driven consumer movement away from flying, with "flight shaming" of those who do. 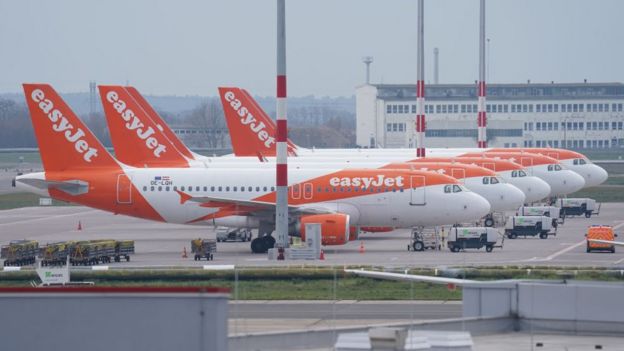 Passenger planes of discount airline EasyJet stand on the tarmac at Berlin-Schoenefeld Airport.

This closure of the European industry, and hard times for airlines elsewhere, comes after an extensive repatriation effort, pockets of which continue. By the time Easyjet grounded its fleet of 330 planes, at the start of last week, it had flown 650 such flights, for 45,000 people. All the cabin crew are on furlough.

The pain for airlines extends to companies that lease planes - more than half of those that would normally be operational. They're being asked for lease holidays. And if airlines start going bust, then the leasing companies will be left with a lot of planes on their hands - surplus planes, if Lufthansa's judgement is correct.

One that's at high risk of going bust is Norwegian. The stock market has noted as much, with a steep fall in its share price. It's since had a rescue package from the Oslo government, but there are still big debts weighing on it.

The US budget package to tackle the effects of coronavirus, at two trillion dollars - $2,000,000,000,000 - earmarks $58bn in loans and loan guarantees for American passenger airlines and cargo carriers, including funds for employees' wages and benefits, and a waiver for aviation tax for the year. 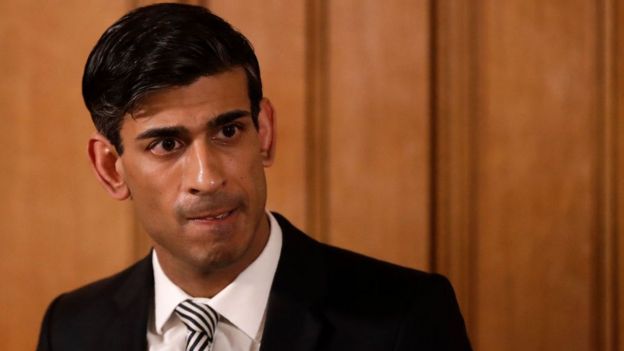 The UK government has been saying it doesn't intend to find a special package in response to the cries for help. However, the Chancellor, Rishi Sunak, qualified that, indicating he'll listen to special pleading, but only after airlines have exhausted all the other bits of support that are on offer.

Virgin Atlantic says it needs help. EasyJet says, for now, that it can get by using the government's existing emergency funds, such as the Job Retention Scheme to fund workers put on furlough. Loganair, now one of the biggest operators on internal UK flights and important to the Highlands and Islands, has called for help, and it's been given some help with the extension of the Treasury's lending criteria to include companies of its size.

British Airways, as part of IAG with Iberia, is in a stronger financial position, but even that could be stretched tight if this goes on, and on. Among those under less financial pressure is Ryanair, with cash in hand and owning most of its aircraft without heavy debts to do so.

It's less clear, these days, what a "flag carrier" is and how much that matters. Are Brits all that sentimental about British Airways, 33 years after it was privatised?

British and European governments may feel there's pressure to ensure their airlines survive as vital commercial infrastructure, in case they emerge from this in a wasteland of corporate carnage, only to find that foreign airlines, with government support though the crisis, take over European routes.

As rules stand, airlines have to be registered in the European Union to be allowed to fly routes within it. The USA has similar rules, to block out foreign ownership of transport entities that are perceived as vital national infrastructure.

And don't forget airports are suffering badly through this - all but deserted, still a bit operational, and with high fixed costs. The Scottish government found some of its extra funds to add them to the sectors enjoying a year-long business rates holiday, along with the companies that operate within them.

That includes John Menzies. You may remember it as your local newsagent, but that division has been sold, and the Edinburgh-based firm is now a global airport ground handling business. With few planes flying, it has laid off 17,500 workers.

It is making the point to governments that if the sector doesn't get support from them, the baggage handlers simply won't be there when the upturn comes. There would be a lot of empty carousels. 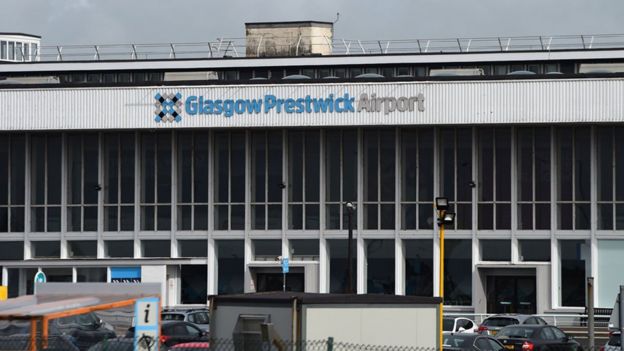 Prestwick Airport was taken into public ownership in 2013

The Scottish government has several airports on its books, for which it may have to dig deep. The secure ones are in the Highlands and Islands, from Sumburgh to Campbeltown.

The insecure one is Prestwick, for which a preferred buyer - understood to be AGS, owner of Glasgow and Aberdeen - was on a lengthy approach to the landing zone. As its financial plans are out the window, and its other airport, Southampton, has lost almost all its traffic with the demise of Flybe, don't be surprised if it aborts that landing. That would leave Prestwick in limbo, with little to do, and dependent on continued Scottish government subsidy.

Aviation is an interesting example of how you can't simply slam the brakes on an entire industry - or much of the world's economy - when it's going at full tilt, without problems and a lot of injured people piling up behind you.

But not everyone is a loser from this. One part of aviation doing very nicely just now is freight. A lot of freight is carried in the belly of passenger aircraft. That includes, for instance, a lot of fresh Scottish salmon. But without that airliner capacity, the cost of getting your produce air freighted on a cargo plane has soared. Per kilo, I'm told, air freight is up around ten-fold. Some furloughed airliners are being rapidly adapted to take freight instead of people.

But there are also unexpected losers. One victim turns out to be the weather forecast. With far fewer planes crossing the Atlantic, harvesting meteorological statistics by the tens of thousands each day, the mighty computers that crunch weather patterns have much less data collection as feedstock.

So if weather forecasters are going unusually wide of the mark in the next few weeks and months, that may be yet another unexpected consequence of unbelievable times.

How bad are China's economic woes?

COVID19- Six sectors crying out for help
Previous Item
NEXT