Hollywood is failing women when it comes to representing gender on screen, according to BBC analysis.

Fewer than half of the 89 films named best picture at the Oscars have passed a common measure of on-screen female representation known as the Bechdel Test.

A movie passes the Bechdel Test if there are at least two named female characters that have a conversation with one another about something other than a man.

This conversation needs to happen just once for it to pass.

The research also shows that a greater percentage of best picture winners passed the Bechdel test in the 1930s compared to the current decade.

Recent winners such as Moonlight, Gladiator and Slumdog Millionaire all fail the test, along with two of this year's best picture nominees, teams from BBC 100 Women and More or Less have found.

Darkest Hour fulfils the requirement to have two named female characters but at no point in the film do women have a conversation with each other about something other than a man.

Two actresses given a high billing - Miranda Nolan and Kim Hartman - instead play characters known as "Nurse" and "Stewardess" respectively. 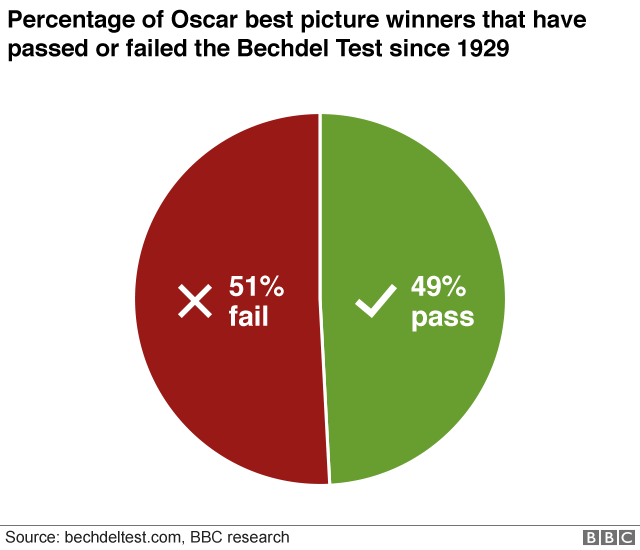 "I think people are doing what they always have done, telling stories that are similar to those they have seen before, without questioning it," says Ellen Tejle, who has introduced a rating system in Sweden to highlight films which pass the Bechdel Test.

"People in the industry need to realise that they have power and responsibility in the process of making a film."

Film correspondent and broadcaster Rhianna Dhillon says women should not end up being shoehorned into films about men.

"We deserve our own narrative. Darkest Hour is a male-centric film they shoehorned a female narrative in. Who are they doing that for?" she says.

"It's not good enough to start making a film before realising that it's just white men being represented."

BBC 100 Women names 100 influential and inspirational women around the world every year and shares their stories. Find us on Facebook, Instagram and Twitter and use #100Women

Was 2017 a tipping point for women in Hollywood?

The Bechdel Test is named after the artist behind the 1985 cartoon it first appeared in.

In Alison Bechdel's comic strip Dykes to Watch Out For, two women are discussing going to the cinema, when one reveals the details of her "rule" for picking what to watch.

Unable to find a film that meets her requirements, the two characters end up going home.

It was never intended to be a serious method of measuring representation, but is now a widely used theory in film criticism. 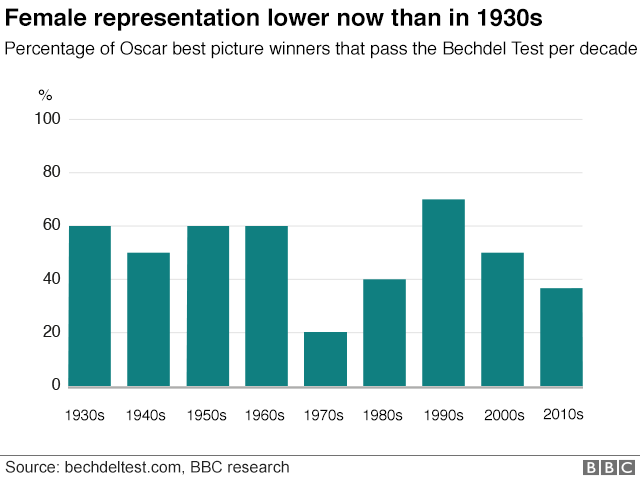 "I love that the Bechdel Test gets the conversation going about what's going on on screen," says Holly Tarquini, director of the Bath Film Festival and founder of the F-rating, which alerts audiences to a film directed by women and/or written by women.

"What's really difficult is that lots of very misogynist films pass it; it doesn't tell you anything about who's telling the story.

How the films were measured

The BBC 100 Women team reviewed dozens of films, using the standard Bechdel Test as a measure.

Information was also gathered and cross-checked from crowd-sourcing website bechdeltest.com.

Where a BBC reviewer had questions about the rating to give a particular film, or disagreed with bechdeltest.com, this was checked with at least two other BBC reviewers and a consensus reached.

Ms Tejle uses the test at her cinema in Sweden and films that pass are given an A-rating.

"Many films pass in just one scene," she says.

"We have had a lot of angry emails and shout-outs, saying that a particular film 'shouldn't have passed because of just a few moments'.

"But that says something too, that people are looking for that scene and reacting - that means they paid attention and actually care. That for me is a success in itself." 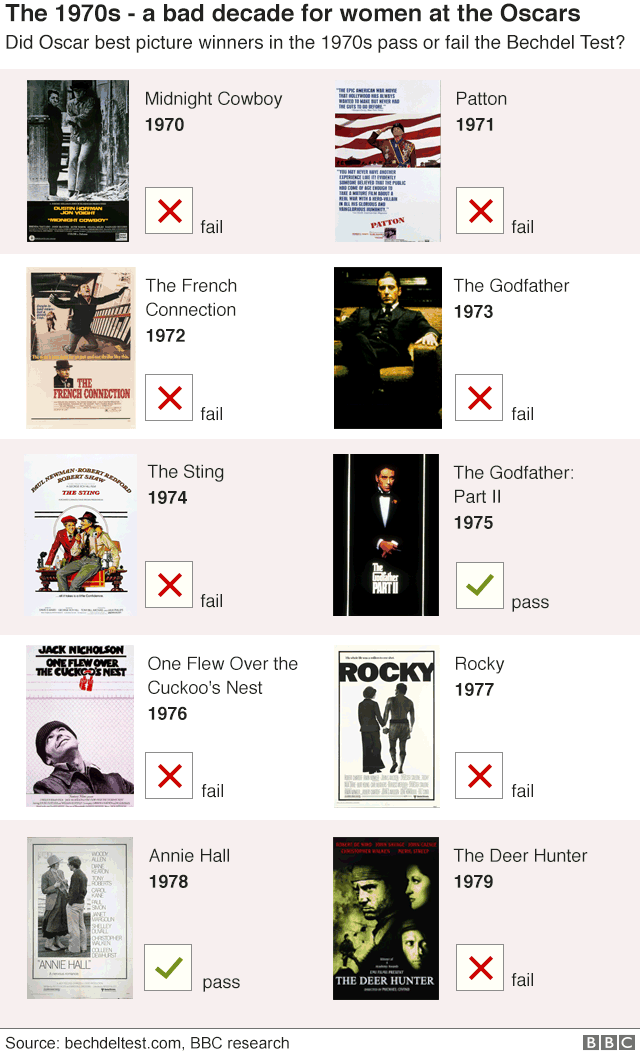 Others point out that the test only addresses gender, without asking whether characters are well-represented in other ways.

Corrina Antrobus, founder of the Bechdel Test Fest, says if she were to come up with a new way of testing films, "it would be something that better addresses intersectionality", a theory that considers the way different aspects of humanity such as ethnicity, class and sexuality, affect one another.

"It would be a measure of how few films portray women of colour, the spectrum of sexualities, religious backgrounds and abilities so that we can get a better snapshot of who is missing or being poorly represented at the table," she says.

According to analysis by the Annenberg Foundation, 34 of the top 100 films in 2016 depicted a female lead or co-lead.

Of those, just three were played by female actors from an underrepresented racial or ethnic group. 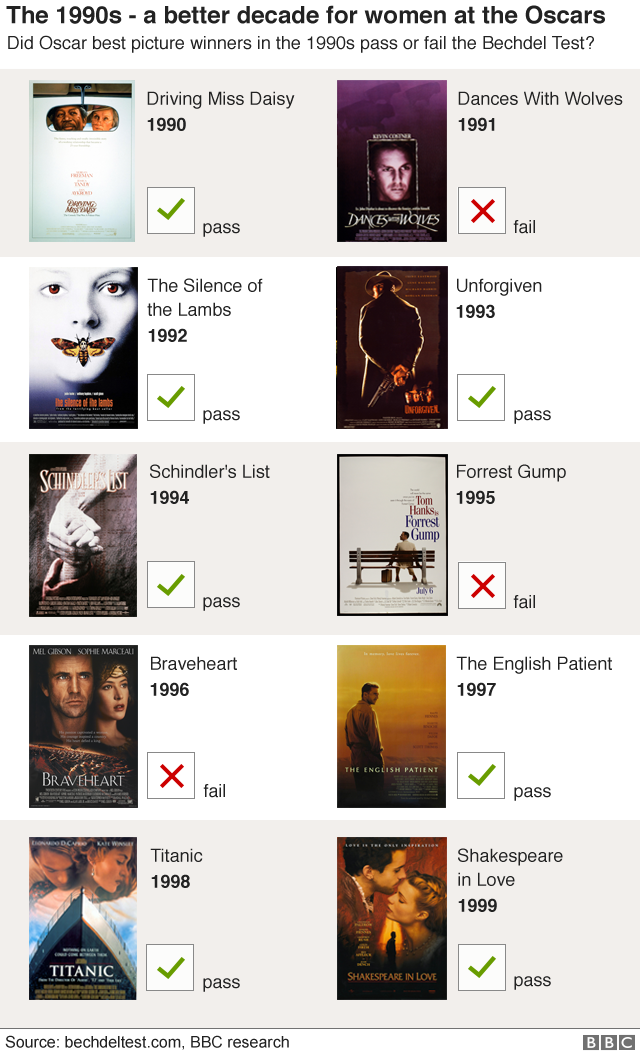 Forty-four of the 89 best Oscar picture winners pass the Bechdel Test, including Argo and Schindler's List.

In both of these examples, very few lines are actually spoken by women - it just so happens that one or two instances of conversation meet the requirements of the test.

Film critics and fans have debated how much the female characters need to say to one another, for it to constitute a pass.

For example, Spotlight, a film about a newspaper investigation into the cover-up of child sexual abuse by Roman Catholic priests, proves contentious on the Bechdel Test website.

In one scene, journalist Sacha Pfieffer (played by Rachel McAdams) is asked for a glass of water by her grandmother, who is not given a first or last name in the credits.

One Bechdel test website user, Leigh, had this to say: "I don't think the grandmother asking for a glass of water in response to learning about the abuse by men in the church constitutes a pass."

User CA2MA disagrees, writing: "I actually think this glass of water scene is a critical and powerful sequence in the film.

"So while the grandmother isn't named, she is an important character - she is the voice of the average [Boston] Globe reader.

"The cover-up that she is reading about is larger than just about men. It is about thousands of people and the failure of an institution." 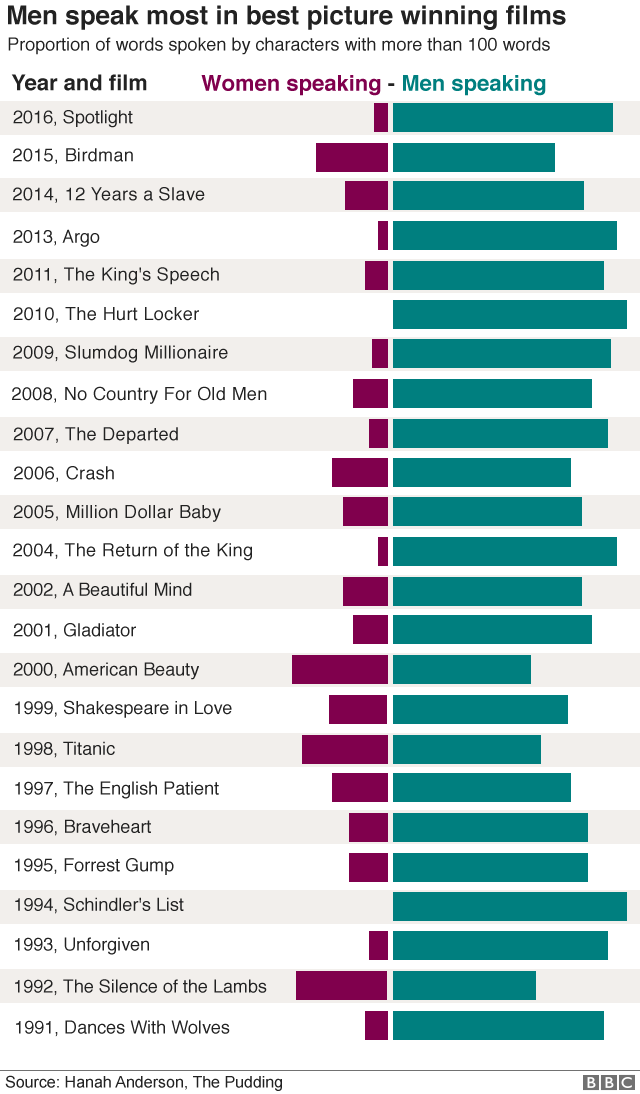 While this research focuses on English-language and US films, it is interesting to note that studies from the Geena Davis Institute suggests that other film-making countries are having greater success in producing more gender-balanced films.

China had the highest number of gender-balanced movies, followed by Korea, UK, Brazil, and Germany, according to analysis of selected films released between 2010 and 2013.

However very few films worldwide are directed by women - and they include just one Oscar best picture winner.

And while Kathryn Bigelow picked up the best director award for The Hurt Locker in 2009, the film itself actually fails the Bechdel Test.

"For decades, there has been an assumption that women will go to see these films, whoever is in them, because that's all there is to watch," says Ms Dhillon.

"Meanwhile men can take their pick because they're always represented. Women are pigeon-holed but we don't realise because it's so subliminal."

Ms Dhillon believes it will be a long time until Hollywood addresses its problems with representation, but films such as I, Tonya and and Black Panther give her hope.

"Black Panther is really exciting because its not made a by a small arthouse; this is a huge film from Marvel and Disney," she says.

Although the film isn't perfect, she points out, there are many examples of "intelligent and brave" women who are represented as the "norm".

"That's one of the reasons why audiences are so excited about it," she says.

There may be financial benefits for studios making films that are more representative, with some research suggesting that films with gender parity make more money per dollar spent on production.

"Dare to break the stereotypes," Ms Tejle tells the filmmakers of the future.

"You might even make a better film with a better story."