Beyonce and Jay-Z's surprise album Everything Is Love was finished just three hours before it was released, their producers have revealed.

Fans first heard about the record on Saturday night when video screens at their London Stadium gig flashed up the message: "Album out now."

Andre Lyon told Rolling Stone: "People were still recording parts an hour and a half before the last show in London.

"They were still putting last-second touches on."

Everything Is Love acts as the final chapter in a trilogy of albums about Jay-Z and Beyonce's marriage.

It began with Beyonce's 2016 album Lemonade, which discussed Jay-Z's alleged affair with "Becky with the good hair"; and continued on Jay-Z's apologetic, confessional 4:44. 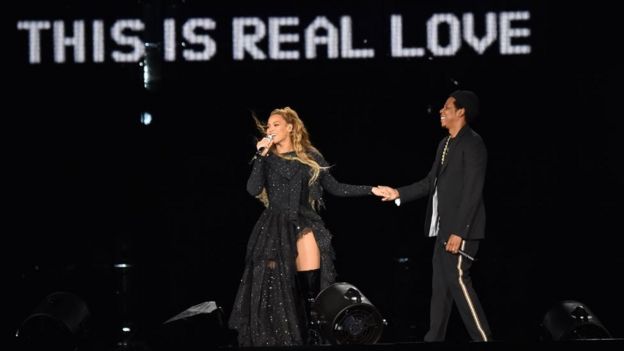 The new album suggests they have weathered the storm and emerged stronger.

"We broke up and got back together," Jay-Z raps on Lovehappy. "We came and we conquered/Now we're happy in love," adds Beyonce.

Brittany 'Chi' Coney, who co-wrote the song, said: "A lot of times with artists, we can't go that deep. With them, we can."

All of the writers and producers who spoke to Rolling Stone expressed admiration for Beyonce and Jay-Z's work ethic, with recording sessions taking place in Paris and Cardiff as the couple rehearsed their joint On The Run II tour.

"Once [Beyonce] went to Wales, things really started to evolve," said Denisia 'Blu June' Andrews, who worked on six of the nine tracks.

"Us being there was key," added Lyon who, as part of the production duo Dre & Cool, set up a recording facility backstage to "feed [them] beats every day".

He said: "[Beyonce and Jay-Z] don't have rules. No-one can get away with the things they do - and when I say get away with, I mean pull off."

Just a couple of years ago, it would have been impossible for an album to be finished so close to release - with time needed to mix and master the tracks before distributing them to streaming services and retailers.

But Jay-Z and Beyonce are part-owners of the streaming service Tidal - allowing them to distribute Everything Is Love as soon as the files were ready (in a similar way, Kanye West also used his stake in Tidal to constantly revise and update his 2016 album The Life Of Pablo).

By Monday, the record was also available for download and on most major streaming services.

Fans initially struggled to find it, before they realised it had been released under the stars' marital name - The Carters - rather than Beyonce and Jay-Z.

The album was accompanied by a symbolically-rich (and lyrically explicit) music video, filmed at The Louvre in Paris.

The museum, which charges about $17,500 for private access to its galleries, said it had been convinced by the stars' respect for its collection.

"Beyonce and Jay-Z visited the Louvre four times in the last 10 years. During their last visit in May 2018, they explained their idea of filming," a spokesperson for the museum told Vulture.

"The deadlines were very tight but the Louvre was quickly convinced because the synopsis showed a real attachment to the museum and its beloved artworks."

Will Ferrell to star in Eurovision film
Next Item