Actors have vented their fury at two audience members who watched England's World Cup penalty shoot-out on their phones in the front row of a musical.

Titanic The Musical actor Niall Sheehy said the women "not only followed the penalty shootout on their phone, but also said 'yesss' on each goal scored".

He declared: "You are the most ignorant audience members I have ever had the misfortune to perform in front of."

The match clashed with a performance at Nottingham Theatre Royal on Tuesday.

The game's dramatic climax saw England beat Colombia in the last 16 and progress to the quarter-finals.

But some audience members couldn't resist keeping up with the match on their phones, despite having a different kind of drama unfolding on stage.

"To say I'm raging is an understatement! They should be marched out in disgrace!"

Sheehy added that a cast member signalled to the women to put their phone away, but they just "smiled, gave a thumbs up and replied 'I know - we won!!'"

He concluded: "I think you may have let us all know you are the stupidest woman on the planet. Please avoid attending any future theatrical productions."

Fellow cast member Stephen Webb wrote: "If you come to theatre to see the show do not... I say do not... sit there on your phone to watch the World Cup!!!

"Stay at home!! It's so disrespectful!! Especially if you are sat in the front row!!!! #manners #GoHome"

One theatregoer wrote to a cast member saying: "I feel I need to apologise on behalf of the appalling lady in the front centre of the stalls who could not stay off her phone.

"I can assure you she doesn't represent the way people usually behave at @RoyalNottingham."

Some Twitter users had sympathy for the women, however. One wrote: "Oh no... Showing a bit of passion for their team in a BIG match!

"Shame on them for doing it during the show but c'mon sometimes human nature has a desire to do things that aren't intentionally bad willed."

In a statement, the theatre said its front of house team told every audience member to switch off their phones as they entered the auditorium, and that a duty manager was in the stalls but wasn't aware of any disturbance.

"It would seem that these two audience members seated on the front row, only a few feet away from the stage, perhaps had not realised that their actions could be both seen and heard," the statement said. 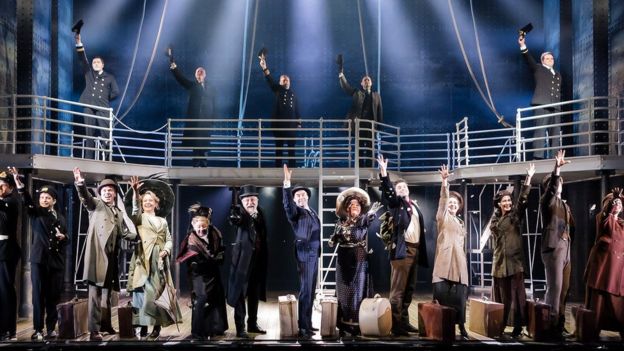 The show is currently on a UK tour

"Even if audience members feel that they are being quiet or discreet in checking their phones during a performance, it is both disrespectful and distracting to the actors on stage and to the other people around them.

"Our staff are vigilant in stopping this kind of behaviour, where it is practical to do so without further distracting from the action on stage, but we do also rely on people using courtesy and respect to those around them when they come to see a live theatre performance."

They will hope audience members resist the temptation to follow England's next match against Sweden at 15:00 BST on Saturday - which coincides with the touring musical's matinee performance.

Nick Jonas is 'Grateful' for Priyanka

'The Secret Code of Wives’

The Weeknd earns 'Song of All Time'

I have not given up on marriage

Ant-Man and the Wasp loses its sting
Next Item